Note: Some authors use the term module category for the category of modules. This term can be ambiguous since it could also refer to a category with a monoidal-category action. [1]

Projective limits and inductive limits exist in the categories of left and right modules. [4]

Over a commutative ring, together with the tensor product of modules ⊗, the category of modules is a symmetric monoidal category.

Much of linear algebra concerns the description of K-Vect. For example, the dimension theorem for vector spaces says that the isomorphism classes in K-Vect correspond exactly to the cardinal numbers, and that K-Vect is equivalent to the subcategory of K-Vect which has as its objects the vector spaces Kn, where n is any cardinal number.

The category of sheaves of modules over a ringed space also has enough injectives (though not always enough projectives).

In mathematics, specifically in category theory, a preadditive category is another name for an Ab-category, i.e., a category that is enriched over the category of abelian groups, Ab. That is, an Ab-categoryC is a category such that every hom-set Hom(A,B) in C has the structure of an abelian group, and composition of morphisms is bilinear, in the sense that composition of morphisms distributes over the group operation. In formulas:

In mathematics, a monoidal category is a category C equipped with a bifunctor

In abstract algebra, a bimodule is an abelian group that is both a left and a right module, such that the left and right multiplications are compatible. Besides appearing naturally in many parts of mathematics, bimodules play a clarifying role, in the sense that many of the relationships between left and right modules become simpler when they are expressed in terms of bimodules.

In category theory, a branch of mathematics, a monoid in a monoidal category is an object M together with two morphisms 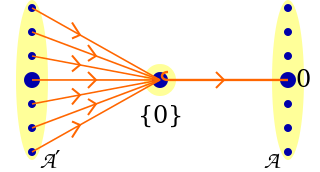 In algebra, the zero object of a given algebraic structure is, in the sense explained below, the simplest object of such structure. As a set it is a singleton, and as a magma has a trivial structure, which is also an abelian group. The aforementioned abelian group structure is usually identified as addition, and the only element is called zero, so the object itself is typically denoted as {0}. One often refers to the trivial object since every trivial object is isomorphic to any other.

In mathematics, the quotient of an abelian category by a Serre subcategory is the abelian category which, intuitively, is obtained from by ignoring all objects from . There is a canonical exact functor whose kernel is .