Last updated May 17, 2021
For other musicians of that name, see Chris Holmes.

Christopher John Holmes (born June 23, 1958) is an American heavy metal guitarist and songwriter. Holmes started his musical career in the Pasadena, California area in the late 1970s and early 1980s. He is best known as the lead guitarist of heavy metal band W.A.S.P. Together with Blackie Lawless and Randy Piper he was one of the founding members of the band. Holmes was a member of W.A.S.P. first from 1983 to 1990, and again from 1996 to 2001.

Prior to meeting Blackie Lawless and Randy Piper, and joining W.A.S.P., Holmes played guitar with Los Angeles bands Buster Savage, LAX, and Slave. Holmes joined W.A.S.P. from 1983 to 1990, playing on the first four studio albums and the first live album. In 1996, Holmes rejoined W.A.S.P., and remained lead guitarist until 2001. Holmes has not played with W.A.S.P. since.

Holmes was contacted by friend and former bandmate Randy Piper to join Piper's new project, Animal. Holmes quickly relocated to Ohio to prepare for Animal's upcoming "900 lb Steam" tour. The tour was considered successful, and after its conclusion, Animal recorded tracks for a new album.

After Holmes returned to Los Angeles in late 2003, he began working with several Southern California-based metal groups, producing and contributing guitar tracks. In 2007, Holmes was involved in the filming of a Randy Rhoads documentary directed by Peter M. Margolis, which is yet to be released. Holmes appears briefly in a 2009 episode of VH1's Rock Docs, "Do It For The Band: The Women of Sunset Strip." In the Summer of 2009 Holmes released Secret Society's "Death by Misadventure."

Where Angels Suffer and solo career

In 2010, he joined Where Angels Suffer with Randy Piper on guitar, Steve Unger (Metal Church) on bass, Rich Lewis (Animal), on vocals, and Stet Howland on drums (Blackfoot, Lita Ford, Killing Machine, Belladonna, Impellitteri, Sister and W.A.S.P.). Ira Black has since replaced Piper. The band toured Europe for the first time in 2011.

On November 26, 2012, Chris Holmes released his first solo album Nothing to Lose and decided to produce, manage and distribute it himself along with his wife Catherine Holmes. After the success of his first album, Chris started recording his second solo album, Shitting Bricks . On May 2, 2015, that album was released worldwide and on the same day Chris Holmes played his first concert in Nantes, France with his new band Mean Man . Two of the songs were filmed live, and uploaded to the official YouTube channel. In September 2018, Chris recorded the EP "Under the Influence" at Replug studio, mixed by Raphael Gary and produced by Chris and Catherine Holmes. It was released on the 2nd December 2018 in Dublin. The album is scheduled to be released in 2020.

Since 2019 Chris has introduced new members to Mean Man. Taking lead on the original W.A.S.P material is Oliver Tindall, who was introduced to the band after sharing the bill with Chris in Welwyn Garden City with his own band The Wicked Jackals. Alongside Ollie and also recruited from The Wicked Jackals is his new bassist Lex Gifford. Tying the 4 piece together is Stephen Jackson on drums whom Chris met 2 years prior with Alexa De Strange from Heart Break Remedy.

In 2021 Holmes was a guest in the new album of the Portuguese thrash metal band Angriff. He played a guitar solo in the song "No Saviours No Gods".

While a member of W.A.S.P., Holmes participated in the filming of the documentary film, The Decline of Western Civilization Part II: The Metal Years . The film included interviews with many well known heavy metal personalities of the era discussing their lifestyle and the metal scene in late 1980s Los Angeles.

Holmes' contribution to the 1988 documentary is perhaps the most memorable, because he was interviewed while floating in a swimming pool, fully clothed and visibly quite intoxicated while his mother sat poolside. The interview stood out in stark contrast to the more light-hearted and humorous interviews conducted by director Penelope Spheeris, which mostly portrayed rockers as good-natured, though often dimwitted or deluded, party animals. During the interview, Holmes smiled drunkenly at the camera, deeming himself "a full-blown alcoholic" and "a piece of crap" despite his band's success, and punctuated his remarks by guzzling from three bottles of vodka. At the end of the interview, Holmes opens a full bottle of Smirnoff over his head as he rolls out of his inflatable chair and into the water.

Chris Holmes is the subject of the 2020 documentary Mean Man: The Story of Chris Holmes , directed by Antoine De Montremy and Laurent Hart. The project's title is from the song "Mean Man" on the 1989 W.A.S.P. album The Headless Children.

Chris Holmes has been married three times. His first marriage was to Kaylen Rodgers in the late 1980s. He was briefly married to Lita Ford in the early 1990s. He is now married to Catherine Holmes, whom he wed in August 2012.

In 2014, Chris Holmes and Catherine Holmes moved to Finland, but after living in Porvoo for a few months they moved to France where Catherine's parents lived. [1] The couple currently resides in Cannes, France. 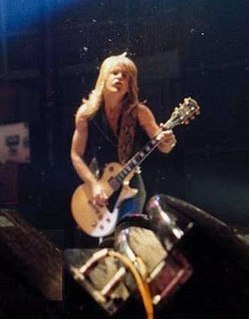 Zachary Phillip Wylde is an American guitarist, singer and songwriter. He is best known for his tenure as the lead guitarist for Ozzy Osbourne and as the founder, lead guitarist, and lead singer of the heavy metal band Black Label Society. His signature bulls-eye design appears on many of his guitars and is widely recognized. He was also the lead guitarist and vocalist of Pride & Glory, who released one self-titled album in 1994 before disbanding. As a solo artist, he released the albums Book of Shadows and Book of Shadows II. 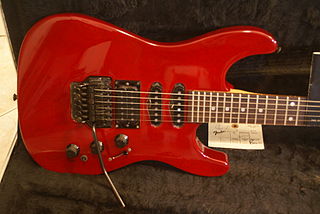 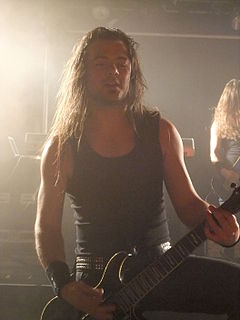 Isaac Delahaye is a Belgian guitarist and composer, best known as the lead guitarist of Dutch symphonic metal band Epica since 2009. Prior to that he was lead guitarist in the Dutch death metal band God Dethroned. Delahaye replaced former guitarist Jens van der Valk in God Dethroned after van der Valk left in 2004. He joined the band after a request from drummer and longtime friend Ariën van Weesenbeek and after several meetings with van Weesenbeek and Henri Sattler, Delahaye was welcomed into the band on 29 June 2004. On 15 January 2009, the official announcement came that Isaac was no longer a part of God Dethroned. Soon afterwards, an announcement came from the band Epica that proclaimed Delahaye as their recently hired guitarist.

Christopher Alan Broderick is an American musician, best known as the former guitarist of the American heavy metal band Megadeth. He is also formerly the lead guitarist and keyboardist for Jag Panzer, appearing on four of Jag Panzer's albums The Age of Mastery, Thane to the Throne, Mechanized Warfare and Casting the Stones before moving on to Megadeth, replacing Glen Drover. Before joining Megadeth and while still in Jag Panzer, he was also a touring guitarist for Nevermore between 2001 and 2003 and then again between 2006 and 2007. He is now the lead guitarist for Act of Defiance, which he formed with fellow ex-Megadeth bandmate, Shawn Drover.

Charvel is a brand of electric guitars founded in the 1970s by Wayne Charvel in Azusa, California and originally headquartered in Glendora, California. Today, Charvel is owned by the Fender Musical Instruments Corporation.

The King V is an electric guitar made by Jackson Guitars. 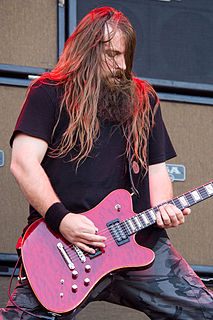 Mark Duane Morton is an American musician who is the lead guitarist of heavy metal band Lamb of God.

Mickael Gordon Thomson is an American heavy metal musician. He is one of two guitarists in the band Slipknot, in which he is designated #7. Thomson originally met founding Slipknot members Anders Colsefni, Donnie Steele and Paul Gray through their mutual involvement in death metal band Body Pit, later joined in early 1996. Following the departure of Joey Jordison in 2013, Thomson is now the third longest-serving member of Slipknot.

Silenoz is a Norwegian guitarist who is a founding member, along with Shagrath and Tjodalv, of the Norwegian symphonic black metal band Dimmu Borgir of which he is the primary songwriter. He is also guitarist for the death metal supergroup, Insidious Disease. 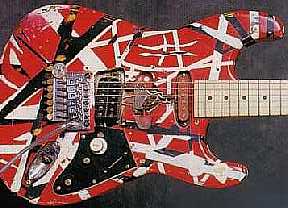 The Frankenstrat, also known as "Frankie", is a guitar created by Eddie Van Halen. Its name is a portmanteau of Frankenstein, the fictional doctor who created a monster by combining body parts of the recently deceased, and the Stratocaster, a model of electric guitar made by Fender. A copy of the Frankenstrat is housed in the National Museum of American History, part of the Smithsonian Institution in Washington, D.C.

The Jackson Rhoads is a model of electric guitar, originally commissioned by guitarist Randy Rhoads and produced by Jackson Guitars.

The star is an avant-garde body shape of solid body electric guitar, particularly favoured for heavy metal music. It blends some features of the Flying V and Gibson Explorer, both of them much older designs.

The Destroyer is an Ibanez brand electric guitar model (originally) manufactured at the FujiGen-Gakki musical instrument factory for the Hoshino-Gakki Company. The Destroyer model was first introduced by Hoshino-Gakki in 1975 and was based on the Gibson Musical Instruments' Explorer design. The Destroyer has since undergone several design and line changes and has been available in both 6-string and bass versions.