A concordance is an alphabetical list of the principal words used in a book or body of work, listing every instance of each word with its immediate context. Concordances have been compiled only for works of special importance, such as the Vedas, [1] Bible, Qur'an or the works of Shakespeare, James Joyce or classical Latin and Greek authors, [2] because of the time, difficulty, and expense involved in creating a concordance in the pre-computer era.

A concordance is more than an index, with additional material such as commentary, definitions and topical cross-indexing which makes producing one a labor-intensive process even when assisted by computers.

In the precomputing era, search technology was unavailable, and a concordance offered readers of long works such as the Bible something comparable to search results for every word that they would have been likely to search for. Today, the ability to combine the result of queries concerning multiple terms (such as searching for words near other words) has reduced interest in concordance publishing. In addition, mathematical techniques such as latent semantic indexing have been proposed as a means of automatically identifying linguistic information based on word context.

Concordances are frequently used in linguistics, when studying a text. For example:

Concordancing techniques are widely used in national text corpora such as American National Corpus, British National Corpus, and Corpus of Contemporary American English available on-line. Stand-alone applications that employ concordancing techniques are known as concordancers [3] or more advanced corpus managers. Some of them have integrated part-of-speech taggers and enable the user to create his/her own POS-annotated corpora to conduct various type of searches adopted in corpus linguistics. [4]

The reconstruction of the text of some of the Dead Sea Scrolls involved a concordance.

Access to some of the scrolls was governed by a "secrecy rule" that allowed only the original International Team or their designates to view the original materials. After the death of Roland de Vaux in 1971, his successors repeatedly refused to even allow the publication of photographs to other scholars. This restriction was circumvented by Martin Abegg in 1991, who used a computer to "invert" a concordance of the missing documents made in the 1950s which had come into the hands of scholars outside of the International Team, to obtain an approximate reconstruction of the original text of 17 of the documents. [5] [6] This was soon followed by the release of the original text of the scrolls.

Corpus linguistics is the study of language as a language is expressed in its text corpus, its body of "real world" text. Corpus linguistics proposes that reliable language analysis is more feasible with corpora collected in the field in its natural context ("realia"), and with minimal experimental interference. 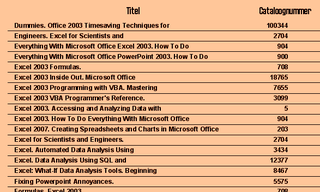 Key Word In Context (KWIC) is the most common format for concordance lines. The term KWIC was first coined by Hans Peter Luhn. The system was based on a concept called keyword in titles which was first proposed for Manchester libraries in 1864 by Andrea Crestadoro.

In linguistics, a corpus or text corpus is a language resource consisting of a large and structured set of texts. In corpus linguistics, they are used to do statistical analysis and hypothesis testing, checking occurrences or validating linguistic rules within a specific language territory.

In corpus linguistics, a hapax legomenon is a word or an expression that occurs only once within a context: either in the written record of an entire language, in the works of an author, or in a single text. The term is sometimes incorrectly used to describe a word that occurs in just one of an author's works but more than once in that particular work. Hapax legomenon is a transliteration of Greek ἅπαξ λεγόμενον, meaning "being said once".

A parallel text is a text placed alongside its translation or translations. Parallel text alignment is the identification of the corresponding sentences in both halves of the parallel text. The Loeb Classical Library and the Clay Sanskrit Library are two examples of dual-language series of texts. Reference Bibles may contain the original languages and a translation, or several translations by themselves, for ease of comparison and study; Origen's Hexapla placed six versions of the Old Testament side by side. A famous example is the Rosetta Stone, whose discovery allowed the Ancient Egyptian language to begin being deciphered.

In computing, stop words are words which are filtered out before or after processing of natural language data (text). Though "stop words" usually refers to the most common words in a language, there is no single universal list of stop words used by all natural language processing tools, and indeed not all tools even use such a list. Some tools specifically avoid removing these stop words to support phrase search.

The Exhaustive Concordance of the Bible, generally known as Strong's Concordance, is a Bible concordance, an index of every word in the King James Version (KJV), constructed under the direction of James Strong. Strong first published his Concordance in 1890, while professor of exegetical theology at Drew Theological Seminary.

In linguistics, the term lexis designates the complete set of all possible words in a language, or a particular subset of words that are grouped by some specific linguistic criteria. For example, general term English lexis refers to all words of the English language, while more specific term English religious lexis refers to a particular subset within English lexis, encompassing only words that are semantically related to the religious sphere of life.

Young's Analytical Concordance to the Bible is a Bible concordance to the King James Version compiled by Robert Young. First published in 1879, it contains "about 311,000 references subdivided under the Hebrew and Greek originals with the literal meaning and pronunciation of each."

IntraText is a digital library that offers an interface while meeting formal requirements. Texts are displayed in a hypertextual way, based on a Tablet PC interface. By linking words in the text, it provides Concordances, word lists, statistics and links to cited works. Most content is available under a Creative Commons license It also offers publishing services that enable similar advantages.

The International Corpus of English (ICE) is a set of corpora representing varieties of English from around the world. Over twenty countries or groups of countries where English is the first language or an official second language are included.

The Corpus of Contemporary American English (COCA) is a more than 560-million-word corpus of American English. It was created by Mark Davies, Professor of Corpus Linguistics at Brigham Young University (BYU).

A Bible concordance is a concordance, or verbal index, to the Bible. A simple form lists Biblical words alphabetically, with indications to enable the inquirer to find the passages of the Bible where the words occur.

WordSmith Tools is a software package primarily for linguists, in particular for work in the field of corpus linguistics. It is a collection of modules for searching patterns in a language. The software handles many languages.

The National Corpus of Polish is the biggest and the most important corpus of the Polish language. A linguistic corpus is a collection of texts where one can find the typical use of a single word or a phrase, as well as their meaning and grammatical function.

A corpus manager is a tool for multilingual corpus analysis, which allows effective searching in corpora.