In astrology, a cusp (from the Latin for spear or point) is the imaginary line that separates a pair of consecutive signs in the zodiac or houses in the horoscope. [1]

Because the solar disc has a diameter of approximately half a degree, it is possible for the Sun to straddle the cusp as it moves across the sky. When this occurs at the moment of birth such a person is said to be "born on the cusp" and some believe that their life is influenced by the characteristics of both signs. For example, if an individual was born when the Sun (by convention the point at the centre of the Solar disc) was located at 29 degrees, 50 minutes Gemini, then one might say that he was born on the cusp of Gemini and Cancer. Much of the Solar disc was actually in Cancer even though the centre was in Gemini. [2]

Although the term "cusp" is universally used for the boundaries of signs, not all astrologers agree that an object can ever be included in more than one sign. Many consider relevant only the location of the Sun's centre, which must be entirely in one sign, and would describe the natal Sun in the example as simply being in Gemini. If late degrees of Gemini have a Cancer-like character, they would describe that as simply the nature of that part of Gemini rather than some influence spilling over from the next sign.[ citation needed ]

On the other hand, astrologers who consider objects "on the cusp" to be meaningfully different from objects entirely in one sign may apply such a description even when no part of the object crosses the boundary. That point of view may consider the Sun to be "on the cusp" even when its centre is as much as two degrees away from the sign boundary. They may also call other objects (much less than half a degree in diameter) "on the cusp" despite no part of the object being in the adjacent sign. Their claim is that the influence of the cusp gets weaker but does not suddenly disappear as the object gets further from the cusp. [3]

A similar debate applies to cusps between houses. 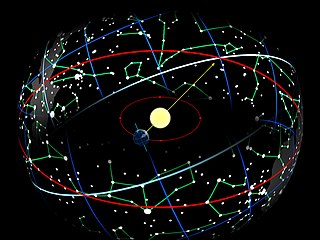 Most horoscopic traditions of astrology systems divide the horoscope into a number of houses whose positions depend on time and location rather than on date. In Hindu astrological tradition these are known as Bhāvas. The houses of the horoscope represent different fields of experience wherein the energies of the signs and planets operate — described in terms of physical surroundings as well as personal life experiences.

The ascendant, is the zodiacal sign and degree that is ascending on the eastern horizon at the specific time and location of an event.

Sidereal and tropical are astrological terms used to describe two different definitions of a year. They are also used as terms for two systems of ecliptic coordinates used in astrology. Both divide the zodiac into twelve "signs" that are divided into 30° each and named after constellations, but while the sidereal system defines the signs relative to the apparent gradual motion of fixed stars at about 1° westward every 72 years from Earth's perspective, the tropical zodiac fixes the Northern Hemisphere's vernal equinox point to 0° of Aries, without taking the precession of the equinoxes into account, and defines the rest of the zodiac from this point.

In Western astrology, astrological signs are the twelve 30° sectors of the ecliptic, starting at the vernal equinox, also known as the First Point of Aries. The order of the astrological signs is Aries, Taurus, Gemini, Cancer, Leo, Virgo, Libra, Scorpio, Sagittarius, Capricorn, Aquarius and Pisces. Each sector was named for a constellation it was passing through in times of naming.

The Age of Aquarius, in astrology, is either the current or forthcoming astrological age, depending on the method of calculation. Astrologers maintain that an astrological age is a product of the earth's slow precessional rotation and lasts for 2,160 years, on average.

Natal astrology, also known as genethliacal astrology, is the system of astrology based on the concept that each individual's personality or path in life can be determined by constructing a natal chart for the exact date, time, and locations of that individual's birth. Natal astrology can be found in the Indian or Jyotish, Chinese and Western astrological traditions.

In astrology, the Imum Coeli, IC, is the point in space where the ecliptic crosses the meridian in the north, exactly opposite the Midheaven. It marks the fourth house cusp in most house systems.

In astrology, a planet's domicile is the zodiac sign over which it has rulership. This is a separate concept from the houses of the horoscope. A planetary ruler is given to each sign, over which the planet is said to have a more powerful influence when positioned therein. The ruling planet associated with a sign is also used as an implied focus of interpretation for the signs on house cusps in a chart. A planet is considered to be in domal dignity when it is positioned in the sign it rules. This is the strongest of the five essential dignities of a planet.

In astrology, a cadent house is the last house of each quadrant of the zodiac. A quadrant begins with an Angular house, proceeds to a Succedent house and ends with a Cadent house. There are four quadrants in an astrological chart, providing four Angular, four Succedent, and four Cadent houses.

In astrology, a triplicity is a group of three signs belonging to the same element. 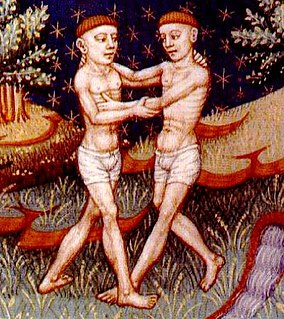 Gemini (pronunciation: JEM-in-eye is the third astrological sign in the zodiac, originating from the constellation of Gemini. It is a positive mutable sign. Under the tropical zodiac, the sun transits this sign between about May and June. Gemini is represented by the twins Castor and Pollux, known as the Dioscuri.

In astrology, certain stars are considered significant. Historically, all of the various heavenly bodies considered by astrologers were considered "stars", whether they were stars, planets, other stellar phenomena like novas and supernovas, or other solar system phenomena like comets and meteors.

Planets in astrology have a meaning different from the modern astronomical understanding of what a planet is. Before the age of telescopes, the night sky was thought to consist of two very similar components: fixed stars, which remained motionless in relation to each other, and "wandering stars", which moved relative to the fixed stars over the course of the year.

Raphael’s Ephemeris is a set of tables used by astrologers which lists the zodiacal positions of astronomical bodies: the Sun, Moon and planets. More recently, the ephemeris includes some asteroids and the ‘centaur’ planet known as 2060 Chiron. Raphael’s Ephemeris, the oldest of its kind, is published annually in a portable booklet and in large multi-year volumes.

The Sign-wise Equal house division of the Zodiac or Rasi-chakra is a very old system of house division; in this system all houses are of equal length. Unlike the Western astrology that measures the longitude of a house from the exact ascendant-point in the sign rising in the east treated as its cusp, in Hindu astrology the entire sign is treated as a house irrespective of the ascendant-point in the sign rising in the east. The standard Hindu convention is to treat the house and the sign of equal length. It considers the twelve houses in the fixed Rasi-chakra (Zodiac), and is practically an "Equal-sign Equal house system". Hindu astrology is sidereal astrology , in which system planetary movements are tracked against the fixed position of the stars or nakshatras; it is believed to give a more accurate astronomical representation of the Sun’s position in relation to the skies i.e. the Zodiac, using the Ayanamsa, and incorporates star-signs based on the movement of the Moon, but all of this are actually false claims made by Indian Astrologers following the sidereal system all these years to fool the gullible and naive citizens. This can be proven, as in sidereal astrological system the 12 zodiac signs which are based on the constellations in the sky are equally divided by 30 degrees whereas the constellation zodiac consist of 13 zodiac signs of unequal sizes.