Born in Bellingham, WA, Abramowicz is of Polish descent. [1] He attended Steubenville Catholic Central High School. When he was a 5-10, 155-pound senior at Catholic Central, Abramowicz didn't attract much attention from college coaches. The only school that offered him a football scholarship was Xavier University in Cincinnati, Ohio.

He went to Xavier and, as a sophomore, caught 18 passes for 257 yards in his first varsity season.

His junior year, he finished with 50 catches for 738 yards and eight touchdowns, helping Xavier to an 8-2 season. That year Xavier knocked off Miami University, 29-28, Cincinnati, 14-3, and Dayton, 10-0. The Musketeers were all but bowl-bound until they dropped a 57-33 decision to Texas Western on the final day of the season despite a 53-yard touchdown reception by Abramowicz. At the conclusion of his junior year, he was named to the All-Catholic All-America team (The Brooklyn Tablet).

During his senior season, he continued as the favorite receiver of quarterback Carroll Williams, catching 34 passes for 585 yards and three touchdowns despite facing constant double coverage. [2]

He graduated with a bachelor of science degree in Economics and Education in 1967. [4]

By his senior year, he had grown to 6-0, 190 pounds, but he still didn't attract much attention from pro scouts due to his lack of speed. Abramowicz was drafted by the Saints in the 17th round of the 1967 NFL Draft.

His career lasted from 1967 through 1974. Abramowicz broke into the starting lineup in the seventh game of the Saints’ first season with 12 catches for 156 yards in a 14-10 loss to the Pittsburgh Steelers.

Abramowicz had his most productive years while with the Saints. In 1968, 1969, and 1970, he ranked in the Top 10 in the NFL in two categories: receptions and receiving yards.

Additionally, in 1968 and 1972 he was Top 10 in receiving touchdowns. His best season is generally considered to be 1969 when he caught 73 passes for 1,015 yards to go along with seven touchdowns. For his efforts, he was voted as an All-Pro by the Sporting News and Associated Press. The 1972 season would turn out to be Abramowicz's last full season with the Saints.

Two games into the 1973 season, he was traded to the 49ers, playing two sub-par seasons. Abramowicz attempted to catch on in 1975, reporting to camp with George Allen's "Over the Hill Gang", the Washington Redskins. However, he did not make the final roster.

Upon his retirement, he held the NFL record for catching at least one pass in consecutive games: 105. The previous record was 96 by Hall-of-Famer Lance Alworth.

After his playing career, Abramowicz worked in private business in New Orleans. He also spent five years as an analyst for Saints games broadcast on radio. In 1992, he was hired by Chicago Bears head coach Mike Ditka to serve as special teams coach. He served in this capacity from 1992 to 1996. In 1997, when Ditka was hired as head coach for the Saints, Abramowicz came back to the Saints as offensive coordinator. He has been out of the NFL since Ditka was fired in 1999.

Abramowicz is a devout Roman Catholic, and is active with various organizations and foundations dedicated to philanthropic causes. He is also a writer, author of "Spiritual Workout of a Former Saint."

Since September 2008, Abramowicz has been hosting his own television show "Crossing the Goal" on the Catholic television network EWTN. Promotional materials from the network indicate the program uses "a sports show format to encourage men to get into spiritual shape." He also serves on the Board of Directors of EWTN. He serves in an advisory capacity to the board of directors of National Fellowship of Catholic Men. He travels throughout the United States speaking at Catholic men's conferences.

He and his wife, Claudia, have been married since 1970 and have three children and four grandsons. [4]

Xavier University has presented him with the two most prestigious awards bestowed on a student athlete—Legion of Honor and Athletic Hall of Fame (1981). [4] 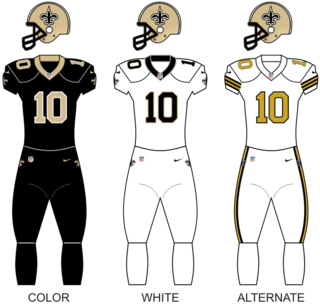 The New Orleans Saints are a professional American football team based in New Orleans. The Saints compete in the National Football League (NFL) as a member of the league's National Football Conference (NFC) South division. Since 1975, the team plays its home games at Caesars Superdome after utilizing Tulane Stadium during its first eight seasons. Founded by John W. Mecom Jr., David Dixon, and the city of New Orleans on November 1, 1966, the Saints joined the NFL as an expansion team in 1967. They are named after the jazz music heritage of New Orleans and the spiritual hymn "When the Saints Go Marching In". 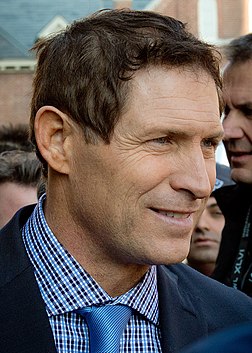 Jon Steven Young is a former professional American football quarterback who played in the National Football League (NFL) for 15 seasons, primarily with the San Francisco 49ers. He also played for the Tampa Bay Buccaneers. Prior to his NFL career, he was a member of the Los Angeles Express in the United States Football League (USFL) for two seasons. Young played college football for Brigham Young University (BYU), setting school and NCAA records en route to being runner-up for the 1983 Heisman Trophy. 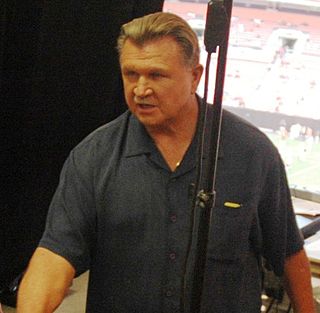 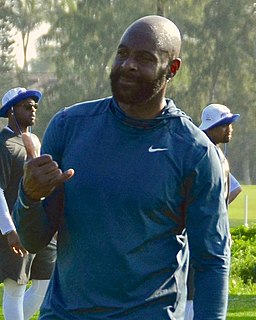 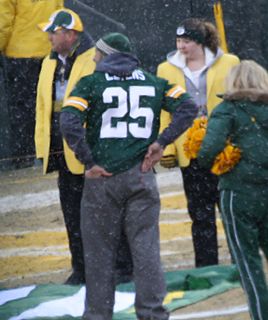 Herbert Dorsey Levens is a former American football running back in the National Football League. He was drafted by the Green Bay Packers in the fifth round of the 1994 NFL Draft. He helped the Packers win the Vince Lombardi Trophy in Super Bowl XXXI against the New England Patriots. He played college football at Notre Dame and later Georgia Tech. 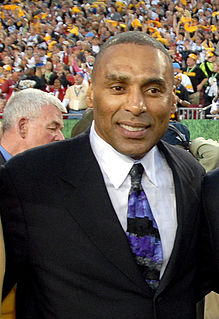 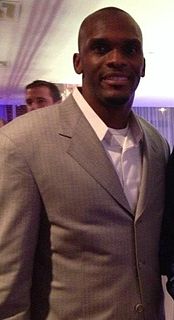 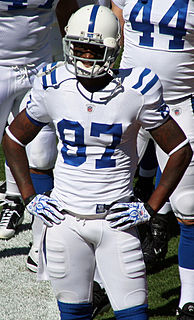 Reginald Wayne is a former American football wide receiver who spent 14 seasons with the Indianapolis Colts of the National Football League (NFL). He played college football for the University of Miami, and was drafted by the Colts in the first round of the 2001 NFL Draft. A six-time Pro Bowl selection, Wayne was a member of the Colts' Super Bowl XLI championship team that beat the Chicago Bears. He ranks tenth all-time in NFL career receptions, tenth all-time in NFL receiving yards, and 24th all-time in career touchdown receptions. On December 14, 2014, Wayne played in both his 209th game and his 142nd win as a member of the Colts, breaking the franchise records set by Peyton Manning. 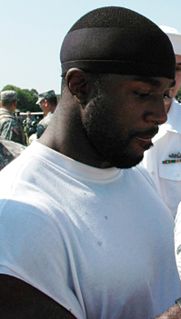 Brian Collins Westbrook is a former American football running back who played for nine seasons in the National Football League (NFL). He was drafted by the Philadelphia Eagles in the third round of the 2002 NFL Draft after playing college football for Villanova University. Following an eight-year career with the Eagles, in which he earned two Pro Bowl selections in 2004 and 2007, Westbrook signed with the San Francisco 49ers, for whom he played in 2010. 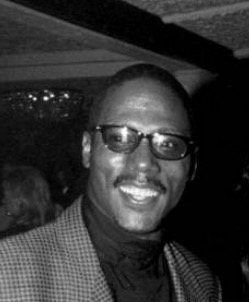 Mark Gregory Clayton is an American former professional football player who was a wide receiver with the Miami Dolphins for most of his career, entering the league in 1983 with the Dolphins and playing there until 1992. He finished out his career with the Green Bay Packers, playing a single season with them in 1993.

Rickey Anderson Jackson is a former American football linebacker who played in the National Football League (NFL) for the New Orleans Saints (1981–1993) and the San Francisco 49ers (1994–1995). With the Saints, he led the team's Dome Patrol linebacker corps. In 1997, Jackson was inducted into the New Orleans Saints Hall of Fame. Jackson won a Super Bowl ring with the 49ers in Super Bowl XXIX one year before retiring. On February 7, 2010, Jackson was inducted into the Pro Football Hall of Fame. 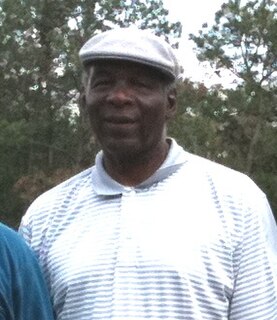 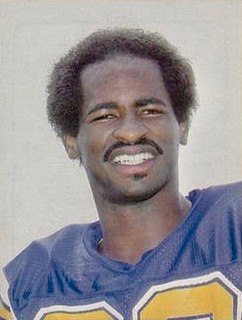 Wesley Sandy Chandler is an American former professional football player who was a wide receiver in the National Football League (NFL) for eleven seasons during the 1970s and 1980s. He was selected to the Pro Bowl four times, and ranked twelfth in NFL history in receiving yards and thirteenth in receptions when he retired. Chandler is a member of the San Diego Chargers Hall of Fame. He played college football for the Florida Gators and was also inducted into the College Football Hall of Fame in 2015. 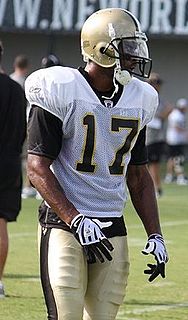 Robert Emery Meachem is a former American football wide receiver. He played college football at Tennessee and was drafted by the New Orleans Saints 27th overall in the 2007 NFL draft. Meachem also played one season with the San Diego Chargers. 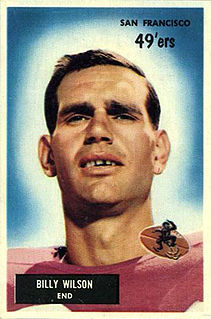 Billy Wilson was an American football wide receiver who played for the San Francisco 49ers from 1951 to 1960. He was named to the Pro Bowl six times. 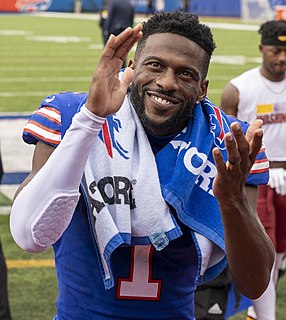 Emmanuel Niamiah Sanders is an American football wide receiver for the Buffalo Bills of the National Football League (NFL). He played college football at SMU, and was drafted by the Pittsburgh Steelers in the third round of the 2010 NFL Draft. Sanders won Super Bowl 50 with the Denver Broncos. He has also been a member of the San Francisco 49ers squad that made Super Bowl LIV, and the New Orleans Saints. 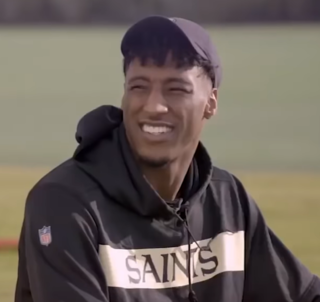 Michael William Thomas Jr. is an American football wide receiver for the New Orleans Saints of the National Football League (NFL). He played college football for Ohio State. Thomas holds the NFL record for the most receptions by a player through his first five seasons with 510 along with the most receptions by a player in a single season with 149. He led the league in receptions in both the 2018 and 2019 seasons, while also leading the league in yardage in the 2019 season.