Devin LaVell Brown (born December 30, 1978) is an American former professional basketball shooting guard who played 8 seasons in the National Basketball Association. Brown won an NBA championship as a member of the San Antonio Spurs in 2005.

Brown was born in Salt Lake City, Utah, [1] and raised in San Antonio, Texas. He played organized basketball at South San Antonio West Campus High School, a school on the south side of San Antonio, where he became the all-time high school scorer in greater San Antonio.

Brown played four seasons at the University of Texas at San Antonio. He is the all-time leading scorer in school history with 1,922 career points. His collegiate averages were 18.3 points, 7.2 rebounds, 2.7 assists and 1.75 steals in 32.0 minutes. In addition to that, Brown was the first player in UTSA school history to record a triple double — a 33-point, 11-rebound, 11-assist performance — which he did on February 17, 2001 against the Louisiana–Monroe Indians. Brown was named Southland Conference Freshman of the Year in 1998–99 and named First Team All-Southland Conference three times. His was the first Roadrunner to have his number retired by UTSA.

Brown began his professional career with the Cagerz in 2002. During his rookie year, he averaged 17.3 points, 6.2 rebounds and won the USBL Rookie of the Year. [4]

The following year Brown received an invite to the San Antonio Spurs' training camp. He was cut before the season started but then re-signed in November 2002 for two weeks during which he played in seven games. [2]

Also in November 2002, Brown was drafted with the second overall pick of the then-named National Basketball Development League draft by the Fayetteville Patriots. [5] He played 44 games for the Patriots and was named the 2003 NBDL Most Valuable Player as well as the 2003 NBDL Rookie of the Year. [6] [7] He averaged 16.9 points on 50% shooting, 4.1 rebounds and two assists in 24.7 minutes.

Brown earned a ten-day contract with the Denver Nuggets in April 2003, appearing in three games with two starts.

After playing for the Spurs 2003 Summer League team, Brown signed with the team for the third time. Brown appeared in 58 games for the Spurs in 2003–04, logging major minutes as the season progressed and played a major role in the playoffs. In game six of the Western Conference Semifinals against the Los Angeles Lakers, Brown scored 15 points, 6 rebounds and three assists in a playoff-career-high 28 minutes.

Brown established career highs in all categories in the 2004–05 season while playing for the Spurs. In 67 games played, he averaged 7.4 points and 2.6 rebounds. [8] With Brown, the Spurs won their third NBA Championship in June 2005. In the Finals, Brown saw the most game time in Game 4 with 20 minutes, but the Spurs lost that game to the Detroit Pistons 102–71. Brown scored 8 points on 2 for 8 field goal shooting and 1 for 3 free throw attempts and had three rebounds and two assists. [9]

On July 12, 2006, the Jazz traded Brown, along with Keith McLeod and Andre Owens, to the Golden State Warriors for veteran guard Derek Fisher, [11] but he was waived during training camp. [12]

On December 22, 2006, he signed with the New Orleans Hornets to help fill in gaps left by injuries to the team's major players. [13] Brown played in 58 games for the Hornets (starting 49 of them), and averaged a career-high 11.6 points per game with and 4.3 rebounds. On April 10, 2007, Brown tied his career high by putting up 25 points against the Los Angeles Clippers.

On September 29, 2007, he signed a one-year deal with the Cleveland Cavaliers. [14] Brown played in 78 regular season games as a Cavalier (starting 20). He averaged 7.5 points, 3.4 rebounds and 2.2 assists, scoring a season-high 20 points against the Sacramento Kings on November 9, and was three assists away from a triple-double against the Washington Wizards on February 22, 2008. On April 2, he tied his season-high against the Charlotte Bobcats. He also had 5 rebounds and 8 assist as a starter in that game. Brown scored double digit points on 19 occasions and rebounds twice.

On August 22, 2008, he signed a two-year contract with the New Orleans Hornets. 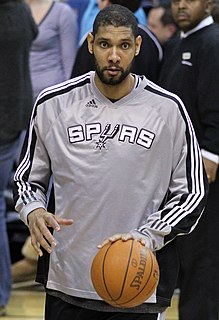 Timothy Theodore Duncan is an American former professional basketball player and coach. Nicknamed "the Big Fundamental", he is widely regarded as the greatest power forward of all time and one of the greatest players in NBA history. He spent his entire 19-year playing career with the San Antonio Spurs.

Jason Keema Hart is an American basketball coach and retired professional basketball player. He is currently an assistant coach at the University of Southern California. He was born in Los Angeles.

Alexander Maurice Acker is an American-Italian professional basketball player for Gallarate Basket of the Serie C Gold, in the Italian minor leagues. He played college basketball for Pepperdine University. 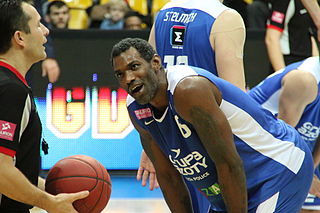 Qyntel Deon Woods is an American former professional basketball player, who last played with AZS Koszalin of the Polish Basketball League. He plays mainly at the small forward position, but he can also play at the shooting guard position, on occasion. 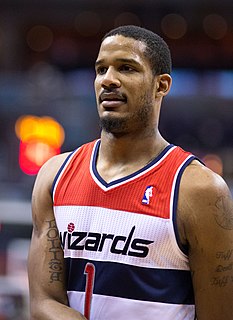 Trevor Anthony Ariza is an American professional basketball player for the Miami Heat of the National Basketball Association (NBA). He won an NBA championship with the Los Angeles Lakers in 2009. He played college basketball for one season with the UCLA Bruins before being selected as the 43rd pick of the 2004 NBA draft by the New York Knicks. He also previously played for the Orlando Magic, Houston Rockets, New Orleans Hornets, Washington Wizards, Phoenix Suns, Sacramento Kings and Portland Trail Blazers.

Patrick John Burke is an Irish former professional basketball player. Burke competed in the National Basketball Association and also played in Europe, ending his career with the Polish club Asseco Prokom Sopot. He was a co-captain of the senior Irish national basketball team, and also represented his country at the World University Games.

Denham Washington Brown is a Canadian professional basketball player who last played for BC Mures in the Romanian National League.

Ime Sunday Udoka is a Nigerian-American former professional basketball player and current assistant coach for the Brooklyn Nets of the National Basketball Association (NBA). He represented the Nigeria national basketball team during his playing career. 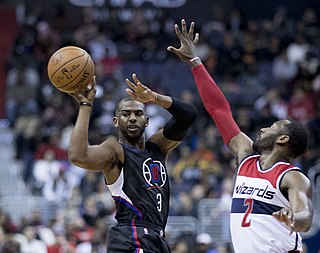 Christopher Emmanuel Paul is an American professional basketball player for the Phoenix Suns of the National Basketball Association (NBA). Nicknamed "CP3", he has won the NBA Rookie of the Year Award, an NBA All-Star Game Most Valuable Player Award, two Olympic gold medals, and led the NBA in assists four times and steals a record six times. He has also been selected to eleven NBA All-Star teams, nine All-NBA teams, and nine NBA All-Defensive teams. 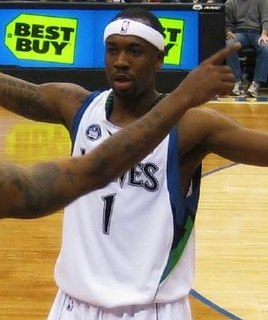 Robert Douglas Brown is an American professional basketball player for the NBA G League Ignite of the NBA G League. Standing at 6 ft 2 in (1.88 m), he plays the point guard position. 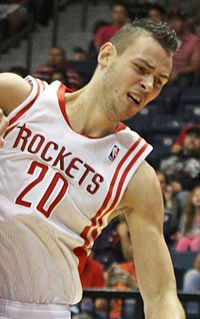 Donatas Motiejūnas is a Lithuanian professional basketball player for the Xinjiang Flying Tigers of the Chinese Basketball Association (CBA). He was drafted 20th overall in the 2011 NBA draft by the Minnesota Timberwolves before going on to win the 2012 Polish Basketball League championship with Asseco Prokom Gdynia. After spending four seasons with the Houston Rockets from 2012 to 2016, Motiejūnas joined the New Orleans Pelicans in January 2017.

Alonzo Edward Gee is an American professional basketball player who last played for the Phoenix Pulse Fuel Masters of the Philippine Basketball Association (PBA). Born and raised in Riviera Beach, Florida, Gee attended the University of Alabama, where he played for the Alabama Crimson Tide men's basketball team for four seasons.

Ryan Earl Richards is a British/Jamaican professional basketball player for the Surrey Scorchers of the British Basketball League (BBL). He began playing in England and has played for short spells for numerous teams in several countries. He was drafted by the San Antonio Spurs with the 49th overall pick in the 2010 NBA Draft, but never played a regular season game for the team.

Rashard Quovon Lewis is an American former professional basketball player. Lewis entered the NBA directly from Alief Elsik High School. He rose to prominence in the NBA as a scorer with the Seattle SuperSonics, and was later a member of the Orlando Magic, Washington Wizards and Miami Heat. He garnered two NBA All-Star selections, one with Seattle and another with Orlando. Lewis reached the NBA Finals three times, winning an NBA championship in 2013 as a member of the Heat.

The 2015–16 NBA season was the Phoenix Suns' 48th season in the NBA. It was their first season where the Suns played in the Talking Stick Resort Arena with its new name, having played there since the 1992–93 season, when it used to be called the America West Arena and then later on, the U.S. Airways Center. 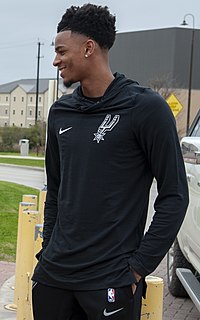 Dejounte Dashaun Murray is an American professional basketball player for the San Antonio Spurs of the National Basketball Association (NBA). He played one season of college basketball for the Washington Huskies, where he earned second-team all-conference honors in the Pac-12 as a freshman in 2015–16. He was selected by the Spurs in the first round of the 2016 NBA draft with the 29th overall pick.

Anthony Lamont Richardson is an American former professional basketball player. He was one of the top prospects of the high school class of 2001, being named North Carolina Mr. Basketball and a McDonald's All-American. He played 4 years of college basketball for the Florida State Seminoles, and went undrafted in the 2005 NBA draft. He then earned an all-star selection in the CBA and was named the 2007 USBL Player of the Year while also leading the league in scoring. He played 9 years of professional basketball, with experiences in Germany, Japan, South Korea, the Netherlands and in the NBA D-League.

Aubrey Lamar Reese is an American former professional basketball player. A 6-foot point guard, he played college basketball at Murray State for 3 years, being named the OVC Player of the Year in 2000. After going undrafted in the 2000 NBA Draft he started his professional career in the USBL in 2000, and the following season he was named the USBL Player of the Year. He then moved to Europe, and in 2003 he was the top scorer of the LNB Pro A in France. He has played in several countries in Asia and Europe, including France, Germany, Israel, Russia and Turkey.