Randy Livingston (born April 2, 1975) is an American former professional basketball player and current coach. He played parts of eleven seasons in the National Basketball Association (NBA) for nine different teams. The national high school player in the country in 1993, Livingston's college and professional careers were marked by a series of injuries that hampered his play.

Livingston attended New Orleans' Isidore Newman School along with standout quarterback Peyton Manning, where he was named the High School co-player of the year in 1992 (with Jason Kidd) and 1993 (with Rasheed Wallace). Livingston also played in the McDonald's All-American Game and Magic's Roundball Classic. He was ranked as the #1 player in the 1993 class, over Rasheed Wallace and Jerry Stackhouse. Isidore Newman School retired Livingston's #50 jersey in 2013. [1]

After high school, Livingston attended Louisiana State University but only appeared in 32 games over two seasons because of knee problems. He was drafted by the Houston Rockets in the second round (42nd pick overall) of the 1996 NBA Draft, [2] later he was signed as a free agent by the Atlanta Hawks in his second year. He played for the Phoenix Suns during the 1999 season, playing his most consistent season (79 games, 14 mpg, 4.8 points, 1.6 rebounds and 2.2 assists per game). He also played with the Suns during the 1999-2000 season, which was the only time in his NBA career that he played on one team for two consecutive years.

Afterwards, Livingston appeared in two games for the Golden State Warriors during the 2000-01 season, and played for the Seattle SuperSonics in 2001–02; he also played with two teams in the CBA. He played briefly for the New Orleans Hornets during 2002–03. He was on the roster for the 2003-04 EA Sports Midwest All-Stars, as well as the Los Angeles Clippers during the 2003-04 NBA season, and was with the Utah Jazz in 2004–05.

Livingston was drafted in the 2005 AAPBL Draft, but the league folded soon thereafter. He spent the beginning of 2005–06 in the Turkish league, playing for Galatasaray, and joined the NBA Development League's Idaho Stampede (for whom he had once played while the team competed in the CBA) in February 2006. He also appeared in five games with the Chicago Bulls in March. In 2006–07 he began with the Stampede once again but, on April 11, 2007, signed a contract for the remainder of the season with the SuperSonics, for a second time. This was due to almost simultaneous injuries to Earl Watson and Luke Ridnour. For his final NBA season, he played 26 minutes in four games, totalling one rebound and four assists.

In 2006–07's NBDL, Livingston's 12.0 points per game for the Stampede were tied for 44th in the league and his 10.5 assists second only to Will Conroy. The following season, as the Stampede were crowned the competition's winners after beating the Austin Toros 2–1, Livingston retired from professional basketball. [3] Although officially retired, the Erie BayHawks of the D-League still drafted him in the expansion draft, in hopes of bringing him out of retirement.

After an MVP season where he led the Idaho Stampede to its first and only NBA Development League Championship, the Idaho Stampede retired Livingston's Jersey which still hangs today at the Century Link Arena located in Boise Idaho.

After his stint coaching the Stampede, he moved to Australia, where he served as a scout and coaching consultant. In August 2016, he was voted into the greater New Orleans Sports Hall of Fame. He was also hired as an assistant basketball coach for Louisiana State University. [6]

In 2018, Livingston returned to Isidore Newman School and coached the 7th and 8th grade boys basketball team. The team went on to win the middle school city championship. The next season, Livingston was chosen to replace retiring Jimmy Tillette as head coach of Newman's varsity boys basketball team. [7] One of his current players is Arch Manning, son of Cooper Manning and nephew to Peyton and Eli.

The Salt Lake City Stars are an American professional basketball team in the NBA G League based in Salt Lake City, Utah, and are affiliated with the Utah Jazz. As of the 2022-23 season, the Stars play in the Maverik Center in West Valley City, Utah. Prior to the move to Salt Lake City for the 2016–17 season, the team was known as the Idaho Stampede.

The NBA G League, or simply the G League, is the National Basketball Association's (NBA) official minor league basketball organization. The league was known as the National Basketball Development League (NBDL) from 2001 to 2005, and the NBA Development League from 2005 until 2017. The league started with eight teams until NBA commissioner David Stern announced a plan to expand the NBA D-League to 15 teams and develop it into a true minor league farm system, with each NBA D-League team affiliated with one or more NBA teams in March 2005. At the conclusion of the 2013–14 NBA season, 33% of NBA players had spent time in the NBA D-League, up from 23% in 2011. As of the 2020–21 season, the league consists of 30 teams, 28 of which are either single-affiliated or owned by an NBA team, along with the NBA G League Ignite exhibition team.

Rasheed Abdul Wallace is an American basketball coach and former professional player. A native of Philadelphia, Wallace played college basketball at the University of North Carolina before declaring for the draft in 1995, where he'd play 16 seasons in the National Basketball Association (NBA).

Luke Ryan Jackson is an American former professional basketball player in the National Basketball Association (NBA). He played college basketball for the Oregon Ducks, earning consensus second-team All-American honors as a senior in 2004. He was selected by the Cleveland Cavaliers in the first round of the 2004 NBA draft with the 10th overall pick. After his playing career, Jackson was a head coach for the Northwest Christian University Beacons. 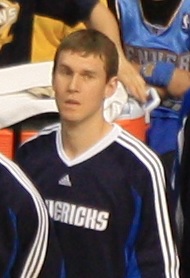 Greg Magado Minor is an American basketball coach and a former National Basketball Association player who spent five seasons with the Boston Celtics. Born in Sandersville, Georgia he played basketball for Washington County High School before enrolling at the University of Louisville to play for the Cardinals. He has been an assistant coach with the NBA Development League's Tulsa 66ers, Bakersfield Jam, and Idaho Stampede.

Michael Dunkin Penberthy is an American professional basketball coach and former player. A point guard from The Master's College, Penberthy went undrafted in the 1997 NBA draft but played for the Los Angeles Lakers, winning an NBA championship in 2001.

The Boise State Broncos men's basketball team represents Boise State University in the Mountain West Conference. The Broncos are led by head coach Leon Rice, hired in March 2010, and play their home games on campus at ExtraMile Arena in Boise, Idaho. BSU's most recent appearance in the NCAA tournament was in 2022 where the team finished ranked #23 in the AP/Coaches polls.

Donald David Newman was an American professional athlete in basketball and Canadian football. Following his playing career, he was the head basketball coach at Arizona State for the 1997–98 season, and Sacramento State from 1992 to 1997. He also was an assistant coach in the NBA with the New Jersey Nets, San Antonio Spurs, and Washington Wizards.

Seth Tarver is an American former professional basketball player who last played for the Passlab Yamagata Wyverns of the B.League. Tarver played for the Oregon State Beavers in college and graduated in 2010 with a degree in business. His brother, Josh Tarver, also played with him all four years at Oregon State. His father is former NFL running-back John Tarver.

Kevin Marquis Murphy is an American professional basketball player who plays for Kazma of the Kuwaiti Division I Basketball League. He played college basketball for Tennessee Tech. 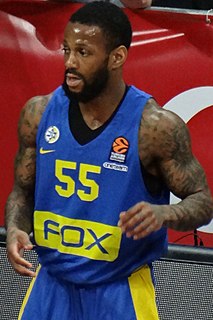 Pierre Deshawn Jackson is an American professional basketball player for the Xinjiang Flying Tigers of the Chinese Basketball Association (CBA). He played college basketball for the College of Southern Idaho and Baylor University in which he was one of the top college players in the 2012–13 season.

Aubrey Lamar Reese is an American former professional basketball player. A 6-foot point guard, he played college basketball at Murray State for 3 years, being named the OVC Player of the Year in 2000. After going undrafted in the 2000 NBA draft he started his professional career in the USBL in 2000, and the following season he was named the USBL Player of the Year. He then moved to Europe, and in 2003 he was the top scorer of the LNB Pro A in France. He has played in several countries in Asia and Europe, including France, Germany, Israel, Russia and Turkey.

Antonio de Andre Reynolds-Dean is an American basketball coach and former professional player, currently serving as associate head coach for the Georgia Bulldogs. A forward/center listed at 6-foot-7, he played college basketball at Rhode Island for 4 years, being named Atlantic 10 Rookie of the Year in his first season and ending his career with 1,576 points and 1,028 rebounds, one of three players to pass the 1,000 mark in both points and rebounds for the Rams. After going undrafted in the 1999 NBA draft he started his professional career with a brief stint in Argentina and then moved to the IBA where he led the league in rebounding and was named Rookie of the Year. He then played in Spain, mainly in the Liga Española de Baloncesto where he ranks top 10 in total rebounds and blocks. He ended his career in 2008 in Argentina and started coaching: he has worked as an assistant coach for Northeastern, College of Charleston and Rhode Island before joining Clemson. In 2015 he was inducted in the University of Rhode Island Athletics Hall of Fame.

Erik Martin is an American basketball coach and former professional player, currently serving as head coach for South Carolina State. A native of California, Martin played one season of college basketball at TCU before transferring to Santa Ana College, a junior college in California where he was a first-team All-State selection. In 1991 he joined the University of Cincinnati, and with the Bearcats he reached the Final Four during the 1992 NCAA tournament. After going undrafted in the 1993 NBA draft he played for various CBA teams and abroad in South Korea and Taiwan. He also earned two selections in the United States national team: he won the silver medal at the 1995 Pan American Games and the gold medal during the 1997 Tournament of the Americas. After retiring as a player he has held several assistant coach jobs, mainly for Bob Huggins, first at Kansas State and later at West Virginia.

David Booth is an American basketball executive and former professional player. A native of Peoria, Illinois, Booth played for Manual High School, where he reached the Class AA Tournaments in three consecutive seasons; he would later be inducted in the Greater Peoria Sports Hall of Fame. He then played 4 years of college basketball with DePaul, and graduated as the second best scorer in program history with 1,933 total points. After going undrafted in the 1992 NBA draft, Booth started his career in France and over a 13-year span he also played in Greece, Italy, Japan, the Philippines and Venezuela. In 2009, Booth was inducted in DePaul's Hall of Fame.