Justin Lorenzo Dentmon (born September 5, 1985) is an American professional basketball player for Mets de Guaynabo of the Baloncesto Superior Nacional (BSN). He played college basketball for Washington. In 2010, he was the top scorer in the Israel Basketball Premier League.

In 2004 Dentmon led his Carbondale Community High School team to a fourth place state finish, during his senior season. He was the top scorer in the 2004 state tournament in Peoria scoring 78 points in only three games. Dentmon led his team in points with 22.1 points per game accumulating 773 points over his senior season. In that same year, he was named to the Illinois Basketball Coaches Association All-State 1st team, the class AA All-Star 1st team and named the South Seven Conference MVP.[1]

After originally committing to play basketball at Illinois State University in Normal, Illinois Dentmon decided to play another year of prep basketball at The Winchendon School in Winchendon, Massachusetts. The NCAA men's basketball academic qualifier rules would have sidelined him for one whole season in Normal, which influenced his decision to continue his prep career. Dentmon's efforts on the court and the classroom at The Winchendon School help him secure a scholarship with the University of Washington. [1]

In his rookie year at the University of Washington, Dentmon started in 32 out of 33 games and was named to the All-Pac-10 freshmen team by the league's coaches. Dentmon had one of the most productive freshman seasons in University of Washington basketball history. He led the Huskies in both steals with 52, and free throw percentage (81.4%). He was also second on the team in assists with 3.7 per game. Dentmon helped the Huskies to a 26–7 record and their second consecutive NCAA tournament Sweet Sixteen appearance.

By the conclusion of his time at the University of Washington, Dentmon accumulated 1,425 points, tied for 12th all-time in UW's history with Bill Hanson; he also finished fourth on the UW career three point field-goals list with 133 field goals made. Dentmon also finished third all-time in assists with 401, and second in steals with 180. [2]

In 2010, he was the top scorer in the Israel Basketball Premier League. [3]

During the 2011–12 season, Dentmon played brief stints with both the San Antonio Spurs [4] and the Toronto Raptors of the National Basketball Association. [5]

On February 14, 2013, Dentmon was named to the Prospects All-Star roster for the 2013 NBA D-League All-Star Game as a replacement for Cory Joseph. [10]

On March 25, 2013, Dentmon signed a 10-day contract with the Dallas Mavericks. [11] He played two games for the Mavs before being released on April 3. [12] He returned to the Legends following his NBA stint. Afterward, he joined the Capitanes de Arecibo of Puerto Rico. [13]

On August 30, 2013, Dentmon signed a one-year deal with Žalgiris Kaunas. [14] [15] He was named EuroLeague MVP of the Week during the fifth week after scoring 24 points (2/4 two-pointers, 6/6 three-pointers), dishing out 9 assists, rebounding 2 rebounds and making 2 steals. [16] On February 15, 2014, he earned bwin MVP honors for the week after leading Zalgiris Kaunas to its first Top 16 victory over Partizan NIS Belgrade on February 13. Dentmon turned in one of the best games of his debut Turkish Airlines EuroLeague campaign with a performance index rating of 33 to lead all players in week 6 of league play. He produced 23 points on 2-for-2 two-point and 5-of-10 three-point shooting plus 5 rebounds, 6 assists, 1 steal, 1 block and 8 fouls drawn. [17] On April 12, Dentmon led his team to an 87–80 victory over Real Madrid in the Lithuanian champs’ final EuroLeague game of the season. Dentmon scored 36 points on 7-of-11 three-point shooting en route to a performance index rating of 40, which led all players for Round 14 and made him the bwin MVP for the third time this season. During the game, Dentmon set the competition record for most three-pointers in a season with 74, and also set a new team mark for points in a game. His all-around performance also included 4-of-5 two-point shooting, 7 free throws made without a miss, 5 rebounds, 3 assists and 2 steals. [18] His many clutch baskets also helped Zalgiris win the LKL title for the 4th consecutive time.

On October 26, 2017, Dentmon was acquired by the Texas Legends where he played till the end of the season. [27]

On November 2, 2019, he has signed with Élan Béarnais of the LNB Pro A. [31] He averaged 20.9 points last season in BCL, leading all scorers in the competition.

In the summer of 2017, Dentmon played in The Basketball Tournament on ESPN for The Stickmen. He competed for the $2 million prize, and for The Stickmen, he averaged 13.5 points per game, also shooting 89 percent from the free-throw line. Dentmon helped take The Stickmen to the second round of the tournament, where they then lost to Team Challenge ALS, 87–73. [33] 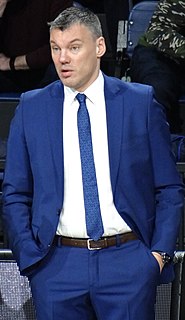 Šarūnas "Šaras" Jasikevičius is a Lithuanian professional basketball coach and former player. He currently serves as a head coach for FC Barcelona of the Liga ACB and the EuroLeague. During his playing career, standing at a height of 6 ft 4 in (1.93 m) tall, he played at the point guard position.

Paulius Jankūnas is a Lithuanian professional basketball player for Žalgiris Kaunas of the Lithuanian Basketball League (LKL) and the EuroLeague. He was also a member of the senior Lithuanian national team. Jankūnas plays at either center or power forward, with power forward being his main position. He earned an All-EuroLeague Second Team selection in 2018. 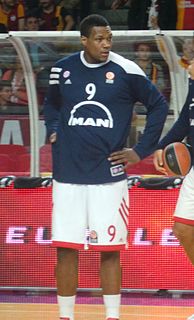 Deon Marshall Thompson is an American-Ivorian professional basketball player for Casademont Zaragoza of the Liga ACB. He played college basketball for the North Carolina Tar Heels. Standing at 2.04 m, he plays the power forward position.

Austin Darren Daye is an American professional basketball player for Umana Reyer Venezia of the Italian Lega Basket Serie A (LBA). He played college basketball for Gonzaga before being drafted 15th overall by the Detroit Pistons in the 2009 NBA draft. He has played for the Pistons, the Memphis Grizzlies, the Toronto Raptors, the San Antonio Spurs and the Atlanta Hawks, while also spending time in Russia, Italy and the NBA Development League. Daye won an NBA championship with the Spurs in 2014. With Umana Reyer Venezia, Daye won the Lega Basket Serie A championship in 2019 and the Italian Basketball Cup in 2020; he was also named most valuable player of the 2019 LBA Finals and the 2020 Italian Basketball Cup Finals.

Gustavo Alfonso Ayón Aguirre is a Mexican professional basketball player for Capitanes de Arecibo of the Baloncesto Superior Nacional (BSN). He also represents the senior Mexican national basketball team in international national team competitions. Standing at a height of 6 ft 10 in (2.08 m), he plays at the center position. Ayon is a two−time All-EuroLeague Second Team selection.

Curtis Louis Jerrells Jr. is an American professional basketball player for Zamalek of the Egyptian Basketball Super League. Standing at 1.85 m, he plays at the point guard position.

Andrew Darius Goudelock is an American professional basketball player for Bilbao Basket of the Liga ACB. Standing at 6 ft 3 in (1.91 m), he plays the shooting guard position. He played college basketball for the Charleston Cougars and was named the Southern Conference Player of the Year in 2011.

Léo Joseph Paul Westermann is a French professional basketball player for AS Monaco of the French LNB Pro A and the EuroLeague. Standing at 1.98 m, he plays the point guard position. He also represents the senior French national basketball team.

Vasilije Micić is a Serbian professional basketball player for Anadolu Efes of the Turkish Basketball Super League and the EuroLeague. He also represents the Serbian national basketball team internationally. He was selected by the Philadelphia 76ers with the 52nd overall pick in the 2014 NBA draft.

Will Cherry is an American professional basketball player for Skyliners Frankfurt of the German Basketball Bundesliga. He played college basketball for the University of Montana, where he was named Big Sky Conference Defensive Player of the Year in 2012 and 2013. Cherry had a short stint in the NBA with the Cleveland Cavaliers before playing in Lithuania, Germany, Turkey, Croatia, Greece and Italy. 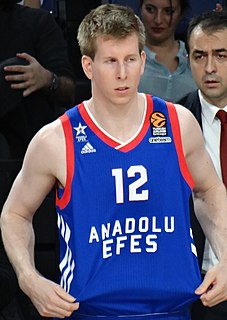 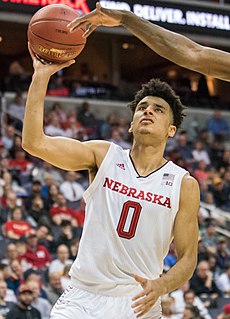 Tai Jack Webster is a New Zealand professional basketball player for Žalgiris Kaunas of the Lithuanian Basketball League (LKL) and the EuroLeague. Prior to playing college basketball in the United States, Webster won a New Zealand NBL championship with the Auckland Pirates in 2012 and an Australian NBL championship with the Breakers in 2013 as a development player. He played four college seasons for the Nebraska Cornhuskers, earning second-team All-Big Ten as a senior in 2017. He played professionally in Germany and Turkey between 2017 and 2020.

Nigel Hayes-Davis is an American professional basketball player for FC Barcelona of the Spanish Liga ACB and the EuroLeague. He played college basketball for the Wisconsin Badgers. Hayes attended Whitmer High School in Toledo, Ohio.

Isaiah Hartenstein is a German-American professional basketball player for the Los Angeles Clippers of the National Basketball Association (NBA).

Zachary Vincent LeDay is an American professional basketball player for KK Partizan of the ABA League. He played college basketball for the University of South Florida and Virginia Tech. At a height of 2.02 m tall, and a weight of 107 kg, LeDay primarily plays at the power forward and center positions.