Earth is one of the classical elements, in some systems numbering four along with air, fire, and water.

Earth is one of the four classical elements in ancient Greek philosophy and science. It was commonly associated with qualities of heaviness, matter and the terrestrial world. Due to the hero cults, and chthonic underworld deities, the element of earth is also associated with the sensual aspects of both life and death in later occultism.

Empedocles of Acragas (c. 495 –c. 435 BCE) proposed four archai by which to understand the cosmos: fire , air , water , and earth. Plato (427 –347 BCE) believed the elements were geometric forms (the platonic solids) and he assigned the cube to the element of earth in his dialogue Timaeus . [1] Aristotle (384–322 BCE) believed earth was the heaviest element, and his theory of natural place suggested that any earth–laden substances, would fall quickly, straight down, towards the center of the cosmos. [2]

In Classical Greek and Roman myth, various goddesses represented the Earth, seasons, crops and fertility, including Demeter and Persephone; Ceres; the Horae (goddesses of the seasons), and Proserpina; and Hades (Pluto) who ruled the souls of dead in the Underworld.

In ancient Greek medicine, each of the four humours became associated with an element. Black bile was the humor identified with earth, since both were cold and dry. Other things associated with earth and black bile in ancient and medieval medicine included the season of fall, since it increased the qualities of cold and aridity; the melancholic temperament (of a person dominated by the black bile humour); the feminine; and the southern point of the compass.

In alchemy, earth was believed to be primarily dry, and secondarily cold, (as per Aristotle). [3] Beyond those classical attributes, the chemical substance salt, was associated with earth and its alchemical symbol was a downward-pointing triangle, bisected by a horizontal line.

Prithvi (Sanskrit: pṛthvī, also pṛthivī) is the Hindu earth and mother goddess. According to one such tradition, she is the personification of the Earth itself; according to another, its actual mother, being Prithvi Tattwa , the essence of the element earth.

As Prithvi Mata , or "Mother Earth", she contrasts with Dyaus Pita , "father sky". In the Rigveda, earth and sky are frequently addressed as a duality, often indicated by the idea of two complementary "half-shells." In addition, the element Earth is associated with Budha or Mercury who represents communication, business, mathematics and other practical matters.

Earth and the other Greek classical elements were incorporated into the Golden Dawn system. Zelator is the elemental grade attributed to earth; this grade is also attributed to the Qabbalistic sphere Malkuth. [4] The elemental weapon of earth is the Pentacle. [5] Each of the elements has several associated spiritual beings. The archangel of earth is Uriel, the angel is Phorlakh, the ruler is Kerub, the king is Ghob, and the earth elementals (following Paracelsus) are called gnomes. [6] Earth is considered to be passive; it is represented by the symbol for Taurus, and it is referred to the lower left point of the pentagram in the Supreme Invoking Ritual of the Pentagram. [7] Many of these associations have since spread throughout the occult community.

It is sometimes represented by its Tattva or by a downward pointing triangle with a horizontal line through it.

Earth is represented in the Aztec religion by a house; to the Hindus, a lotus; to the Scythians, a plough; to the Greeks, a wheel; and in Christian iconography; bulls and birds. 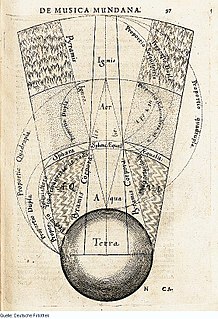 Classical elements typically refer to the concepts of earth, water, air, fire, and (later) aether, which were proposed to explain the nature and complexity of all matter in terms of simpler substances. Ancient cultures in Persia, Greece, Babylonia, Japan, Tibet, and India had similar lists, sometimes referring in local languages to "air" as "wind" and the fifth element as "void". The Chinese Wu Xing system lists Wood, Fire, Earth, Metal, and Water, though these are described more as energies or transitions rather than as types of material.

Fire has been an important part of all cultures and religions from pre-history to modern day and was vital to the development of civilization. It has been regarded in many different contexts throughout history, but especially as a metaphysical constant of the world.

Water is one of the elements in ancient Greek philosophy, in the Asian Indian system Panchamahabhuta, and in the Chinese cosmological and physiological system Wu Xing. In contemporary esoteric traditions, it is commonly associated with the qualities of emotion and intuition. 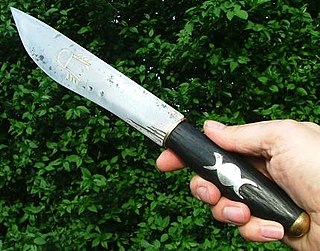 An athame or athamé is a ceremonial blade, generally with a black handle. It is the main ritual implement or magical tool among several used in ceremonial magick traditions, and by other neopagans, witchcraft, as well as satanic traditions. A black-handled knife called an arthame appears in certain versions of the Key of Solomon, a grimoire originating in the Middle Ages.

Hermeticism, also called Hermetism, is a religious, philosophical, and esoteric tradition based primarily upon writings attributed to Hermes Trismegistus. These writings have greatly influenced the Western esoteric tradition and were considered to be of great importance during both the Renaissance and the Reformation. The tradition traces its origin to a prisca theologia, a doctrine that affirms the existence of a single, true theology that is present in all religions and that was given by God to man in antiquity.

A pentacle is a talisman that is used in magical evocation, and is usually made of parchment, paper, cloth, or metal, upon which a magical design is drawn. Protective symbols may also be included, a common one being the six-point form of the Seal of Solomon. 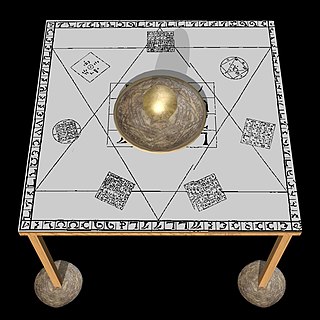 Enochian magic is a system of ceremonial magic based on the evocation and commanding of various spirits. It is based on the 16th-century writings of John Dee and Edward Kelley, who claimed that their information, including the revealed Enochian language, was delivered to them directly by various angels. Dee's journals contained the Enochian script, and the tables of correspondences that accompany it. Dee and Kelley believed their visions gave them access to secrets contained within the Book of Enoch.

Timaeus is one of Plato's dialogues, mostly in the form of a long monologue given by the title character Timaeus of Locri, written c. 360 BC. The work puts forward speculation on the nature of the physical world and human beings and is followed by the dialogue Critias.

An adept is an individual identified as having attained a specific level of knowledge, skill, or aptitude in doctrines relevant to a particular author or organization.

Abrahadabra is a word that first publicly appeared in The Book of the Law (1904), the central sacred text of Thelema. Its author, Aleister Crowley, described it as "the Word of the Aeon, which signifieth The Great Work accomplished." This is in reference to his belief that the writing of Liber Legis heralded a new Aeon for mankind that was ruled by the god Ra-Hoor-Khuit. Abrahadabra is, therefore, the "magical formula" of this new age. It is not to be confused with the Word of the Law of the Aeon, which is Thelema, meaning "Will".

According to ancient and medieval science, aether also spelled æther or ether and also called quintessence, is the material that fills the region of the universe above the terrestrial sphere. The concept of aether was used in several theories to explain several natural phenomena, such as the traveling of light and gravity. In the late 19th century, physicists postulated that aether permeated all throughout space, providing a medium through which light could travel in a vacuum, but evidence for the presence of such a medium was not found in the Michelson–Morley experiment, and this result has been interpreted as meaning that no such luminiferous aether exists.

In ceremonial magic, banishing refers to one or more rituals intended to remove non-physical influences ranging from spirits to negative influences. Although banishing rituals are often used as components of more complex ceremonies, they can also be performed by themselves.

The Lesser Banishing Ritual of the Pentagram is a ceremonial magic ritual devised and used by the original order of the Golden Dawn that has become a mainstay in modern occultism. This ritual is considered by many to be a basic preliminary to any other magical work, so much that it was the only ritual, besides initiation rituals, taught to members of the Golden Dawn before they advanced to the Inner Order.

In the tradition of the 1880s Order of the Golden Dawn a watchtower or guardian in ceremonial and derived neopagan magical tradition is a tutelary spirit of one of the four cardinal points or "quarters". They are also variously associated in many traditions with each the four classical elements and stars. The Watchtowers are invoked during the ritual of casting a magic circle.

Matter is the substrate from which physical existence is derived, remaining more or less constant amid changes. The word "matter" is derived from the Latin word māteria, meaning "wood", or “timber”, in the sense "material", as distinct from "mind" or "form". The image of wood came to Latin as a calque from the Greek philosophical usage of hyle (ὕλη).

In the neopagan religion of Wicca, a range of magical tools are used in ritual practice. Each of these tools has different uses and associations, and serve primarily to direct magical energies. They are used at an altar, inside a magic circle.

Today, there is some debate regarding ancient Egyptian philosophy and its true scope and nature.