Hope was educated at Keble College, Oxford. He was ordained Deacon in 1901, and Priest in 1902. [2] After a curacy in Middlesbrough he held incumbencies at Marske-by-the-Sea, Mexborough and Beverley. [3] 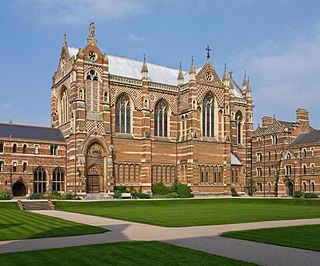 Keble College is one of the constituent colleges of the University of Oxford in England. Its main buildings are on Parks Road, opposite the University Museum and the University Parks. The college is bordered to the north by Keble Road, to the south by Museum Road, and to the west by Blackhall Road.

Charles Kempson Waller was Provost of Chelmsford from 1949 until his death.

Thomas Oswald Wonnacott was Archdeacon of Suffolk from 1938 to 1947.

Thomas Frederick Buckton was an Anglican Archdeacon in the Mediterranean from 1922 until his death.

Edward Francis Whately Eliot was an Anglican Archdeacon in the Mediterranean.

(Arthur) Huxley Thompson was a Church of England priest and author, most notably Archdeacon of Exeter from 1930 until his death.

Charles Parr Burney (1786–1864) was an Anglican Archdeacon in the middle of the Nineteenth Century.

The Venerable William Palin was Archdeacon of Cleveland from 1947 until 1965.

The Venerable (Anthony) Basil Carter was Archdeacon of Cleveland from 1938 until his death.

Herbert Thomas Parry was Archdeacon of Lindsey from 1934 until his death.

(Edwin) Lisle Marsden, M.A. (Lambeth) was Archdeacon of Lindsey from 1948 until his death.

The Ven. Edgar Stephenson was Archdeacon of Rochdale from 1951 until 1962.

Samuel Edward Branch, OBE was an Anglican priest: most notably Archdeacon of Antigua from 1906 until 1921.