Originally from Yamaguchi Prefecture, Hirotsu was educated at Doshisha University, for whose team he played until 1989, when he joined Kobe Steel, with which he won seven All-Japan Championship titles. [3] In the Japan national team, he was also part of the 1995 Rugby World Cup roster, but his only cap was during the defeat against Tonga for 16-47, in Nagoya, on 11 February 1995. [4] 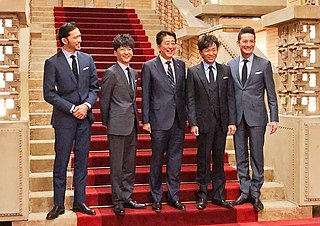 Tokio is a Japanese rock/pop band formed by Johnny & Associates that debuted in 1994. It is made up of four men who were signed with Sony Music Entertainment from 1994 to 2001, with Universal Music Japan from 2001 to 2008, and are now signed under J Storm, a label owned by Johnny & Associates. In addition to their activities as a band, the members of Tokio also act in dozens of dramas and host variety programmes, both as a group and individually.

Tomokazu Miura is a Japanese actor.

Shogo Mukai, is a Japanese former rugby union coach who coached the Japan national rugby union team from 2001 up to the 2003 Rugby World Cup.

Motohiro Yamaguchi is a former Japanese football player and manager. He played for Japan national team.

School Wars: Hero is a 2004 film directed by Japanese film director Ikuo Sekimoto. It is based on the 1984 TBS TV drama School Wars.

Sadao Abe is a Japanese actor, stage actor and musician from Matsudo, Chiba Prefecture. He started his acting career after joining a theater company/talent agency, Otona Keikaku, in around 1992 and gained his popularity after the drama series Team Medical Dragon and as being the lead singer of the Japanese comedy rock band Group Tamashii. His stage name is a pun on notorious geisha Sada Abe. 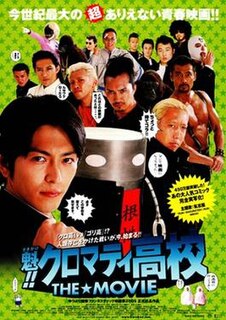 Cromartie High - The Movie is a 2005 Japanese live-action film directed by Yūdai Yamaguchi and starring Takamasa Suga. The film is based on the manga Cromartie High School by Eiji Nonaka which had also been previously adapted as an anime series.

Hotaru Yamaguchi is a Japanese footballer who plays as a midfielder for Vissel Kobe. He is also a member of the Japanese national team. 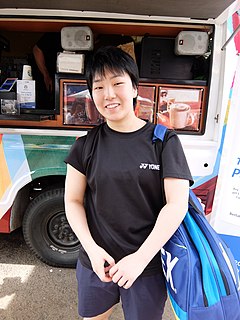 Akane Yamaguchi is a Japanese badminton player who specializes in singles play. She is a member of the Kumamoto Saishunkan team. She has been ranked as world number 1 in the BWF ranking on two separate occasions, for a total of 10 weeks. Even with a small physique, Yamaguchi used her lack of height to best advantage. She is known as a retriever but there have been occasions when she has used a fiercer style, combining more aggression with her great court coverage. She was able to play a vast number of parallel shots from just above shoulder level, and straight into the shoulders and midriff of her opponent.

Marie Yamaguchi is a Japanese rugby sevens player. She plays as a Winger.

Eiji Mikawa was a Japanese businessperson and rugby player, who played for the Japan national rugby union team in the 1950s. He worked for Yokogawa Electric from 1956 and became company president in 1993.

Hirotsu is a Japanese surname. Notable people with the surname include: