Sione Latu (born February 23, 1971) is a former Tongan-born Japanese rugby player. He played as a number 8. He also played for Tonga and Japan XV. He is not related with fellow Japan national rugby union player Sinali Latu.

His first cap for Japan was during a match against Hong Kong, at Seoul, on September 26, 1992. He was also part of the 1995 Rugby World Cup, where he played two matches, against Wales and Ireland. After the tournament, he retired. He also played for Sanyo.

Tevita Leo-Latu is a New Zealand rugby league footballer who plays for the Point Chevalier Pirates. He previously played for the New Zealand Warriors and the Cronulla-Sutherland Sharks in the National Rugby League and the Wakefield Trinity Wildcats in the Super League. His usual position is at hooker though he can also play in the halves. 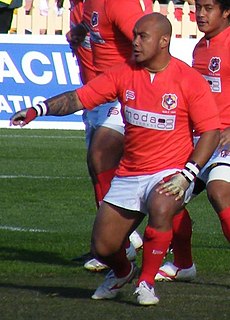 Sione Vaiomounga is a Tongan rugby union footballer. He currently plays back-row in which position he represented Tonga at the 2011 Rugby World Cup in New Zealand. Sione made his debut for the national side on 28 November 2009, where he opened his scoring count with a try against Portugal. Sione played for Toloa Old Boys, and he was the only player to be picked in Tonga's 30-man squad for the 2011 World Cup who played in Tonga's domestic division.

Hugh Roach is an Australian rugby union player who currently plays as a hooker for the {{}} in Super Rugby.

Sione Mata'utia-Leifi is a professional rugby league footballer who plays for the Newcastle Knights in the National Rugby League. He plays as a second-row, centre, wing and fullback.

Penieli Latu is a former Tongan rugby union player. He represented Tonga at the 1995 Rugby World Cup. He earned 9 caps for Tonga from 1994 to 1995. He debuted against Samoa on June 4, 1994. His last match was against Fiji a year later on July 15. 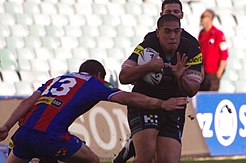 Leilani Latu is a Tongan international rugby league footballer who plays as a prop for the Gold Coast Titans in the NRL.

Sione Mafileo is a New Zealand rugby union footballer who currently plays as a prop for North Harbour in the ITM Cup and the Blues in the international Super Rugby competition.

Sione Molia is a New Zealand rugby union player. He made his debut for the New Zealand sevens team at the 2016 USA Sevens. He scored two tries at the 2016 Canada Sevens in New Zealand's semi-final match against Australia to help them into the finals.

Matafeo George Latu is a barrister and solicitor. He is a former dual international rugby union player.

Latu Vaʻeno is a former Tongan rugby union player. He played as a prop.

Shinobu Aoki , is a former Japanese rugby union player who played as fly-half and former coach.

Tevita Va`enuku is a Tongan former rugby union player. He played as wing.

Sione Vailanu is a Tongan rugby union player who plays for English Premiership side Saracens. Before joining Saracens he was a sevens player in Japan.

Nafe Tufui is a Tongan former rugby union player. He played as scrum-half.