Engineer's Day is observed in several countries on various dates of the year. As of the 20th of November 2019, the World Federation of Engineering Organizations (WFEO) has designated March 4th as 'World Engineering Day for a Sustainable World'.

Slovak Republic has been a member of European Union since 2004. Slovakia has been an active participant in U.S.- and NATO-led military actions. There is a joint Czech-Slovak peacekeeping force in Kosovo. After the September 11, 2001 Terrorist Attack on the United States, the government opened its airspace to coalition planes. In June 2002, Slovakia announced that they would send an engineering brigade to Afghanistan.

The Hyphen war was the conflict over what to call Czechoslovakia after the fall of the Communist government in 1989.

Adidovce is a village and municipality in Humenné District in the Prešov Region of north-east Slovakia. The mayor is Milan Koromház.

Kamenný Most is a village and municipality in the Nové Zámky District in the Nitra Region of south-west Slovakia.

Malá nad Hronom is a village and municipality in the Nové Zámky District in the Nitra Region of southwest Slovakia.

Nasser Pourpirar, was a famous Iranian writer and historical revisionist. He was known for his controversial theories questioning the academically recognized historiography of Iran from Achaemenids to the beginning of the Safavid period.

A spaghetti bridge is a bridge made of uncooked spaghetti or other hard, dry, straight noodles. Bridges are constructed for both educational experiments and competitions. The aim is usually to construct a bridge with a specific quantity of materials over a specific span, that can sustain a load. In competitions, the bridge that can hold the greatest load for a short period of time wins the contest. There are many contests around the world, usually held by schools and colleges. 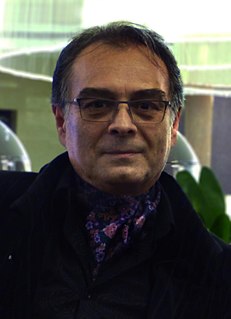 Dr. Reza Khodadadi is an Iranian contemporary artist, academic, painter, sculptor, urban artist, and muralist. He has a PhD in Art Research; and is a Professor of Art at the Tehran University of Art and the President of Farabi International Campus. He lives and works in Tehran.

Esteghlal Tehran Futsal Club was an Iranian futsal club based in Tehran, Iran. Esteghlal were the champions of the Premiere Futsal League in 2001 and 2002.

The Association of Maldivian Engineers (AME) is a professional organization of engineers in the Maldives. It is was founded in 2008. The AME joined the World Council of Civil Engineers in 2013.

The World Federation of Engineering Organizations is an international, non-governmental organization representing the engineering profession worldwide. The current president is Gong Ke 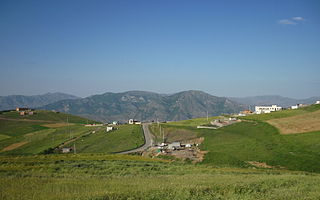 Shojaabad is a village in Misheh Pareh Rural District, in the Central District of Kaleybar County, East Azerbaijan Province, Iran. At the 2006 census, its population was 73, in 21 families.

Yusoflu is a village in Minjavan-e Gharbi Rural District, Minjavan District, Khoda Afarin County, East Azerbaijan Province, Iran. At the 2006 census, its population was 40, in 8 families. According to a more recent and, perhaps, reliable statistics the population is 26 people in 6 families.

Fly for MS is a New York City-based non-profit organization started by pilots taking a novel approach to dealing with multiple sclerosis, offering flights in small aircraft to mobility-impaired patients, some of whom have never been in an aircraft, and stimulating media coverage. Its slogan is "We Give Wings to Those Who Cannot Walk". Thus far, the flight programs have been conducted in 2010 and 2015 across locations in the Western Hemisphere. Fly for MS has generated news reporting in over 40 countries worldwide including on CNN, BBC, NBC and the Wall Street Journal.