Ernest Sosa (born June 17, 1940) is an American philosopher primarily interested in epistemology. [1] Since 2007 he has been Board of Governors Professor of Philosophy at Rutgers University, but he spent most of his career at Brown University.

He joined the Rutgers faculty in 2007, having taught at Brown University since 1964. While full-time at Brown, he was also a distinguished visiting professor at Rutgers every spring from 1998 to 2006. [3] Sosa has been described as "one of the most important epistemologists of the last half-century." [4]

Sosa is a past president of the American Philosophical Association and a Fellow of the American Academy of Arts & Sciences. [3] He edits the philosophical journals Noûs [5] and Philosophy and Phenomenological Research . [6] In 2005 he delivered the John Locke Lectures at Oxford, [7] which formed the basis of his 2007 book.

Sosa received the 2010 Nicholas Rescher Prize for contributions to systematic philosophy, conferred by the University of Pittsburgh biennially. [8] His son, David Sosa, is a professor and chair of the philosophy department at the University of Texas, Austin.

In addition to epistemology, Sosa has also written on metaphysics, modern philosophy and philosophy of mind. In his books Knowledge in Perspective (1991) and A Virtue Epistemology (2007), he defends a form of virtue epistemology called "virtue perspectivism", which distinguishes animal knowledge from reflective knowledge.

Absolutism and Its "explosion"In "Existential Relativity," Sosa considers theories of composition. [11] He calls ordinary theories of composition absolutism, which has objects as existing absolutely when compositional conditions are fulfilled in the object. Objects exist when certain stuff is arranged in a certain way. Absolutism leads to what Sosa coins an "explosion" of entities in that an indeterminate number overlap at a location and any change destroys and creates an indeterminate number of others.

Sosa provides an illustration to motivate this problem. A snowball is made of a piece of snow in a "round" (spherical) shape and follows certain persistence conditions. Sosa introduces the concept of a "snowdiscall." A snowdiscall is "constituted by a piece of snow as matter and as form any shape between round [spherical] and being disc-shaped." [12] On this definition, a snowball is also a snowdiscall, but a snowdiscall is not necessarily a snowball. So there are two distinct objects that overlap. But just as there is a snowdiscall, there can be an indeterminate number of other objects: objects between round and 50% disc-shaped, objects between round and 30% disc-shaped, etc. These are distinct, existing objects and not just arbitrary descriptions. What seems to be arbitrary in absolutism is the idea that one object (the snowball) has more claim to existence than the others.

Sosa's working definition of existential relativism: "that what exists relative to our present scheme O is what it recognizes directly, what it recognizes indirectly through its predecessors or successors, and what it would recognize if we had developed appropriately or were to do so now, and had been or were to be appropriately situated." [15] This definition allows for objects to exist if a conceptual scheme recognizes them, recognizes something that entails another object's existence, or would have recognized them if people had different capacities or spatiotemporal locations.

Willard Van Orman Quine was an American philosopher and logician in the analytic tradition, recognized as "one of the most influential philosophers of the twentieth century." From 1930 until his death 70 years later, Quine was continually affiliated with Harvard University in one way or another, first as a student, then as a professor of philosophy and a teacher of logic and set theory, and finally as a professor emeritus who published or revised several books in retirement. He filled the Edgar Pierce Chair of Philosophy at Harvard from 1956 to 1978. A 2009 poll conducted among analytic philosophers named Quine as the fifth most important philosopher of the past two centuries. He won the first Schock Prize in Logic and Philosophy in 1993 for "his systematical and penetrating discussions of how learning of language and communication are based on socially available evidence and of the consequences of this for theories on knowledge and linguistic meaning." In 1996 he was awarded the Kyoto Prize in Arts and Philosophy for his "outstanding contributions to the progress of philosophy in the 20th century by proposing numerous theories based on keen insights in logic, epistemology, philosophy of science and philosophy of language."

Roderick Milton Chisholm was an American philosopher known for his work on epistemology, metaphysics, free will, value theory, and the philosophy of perception. 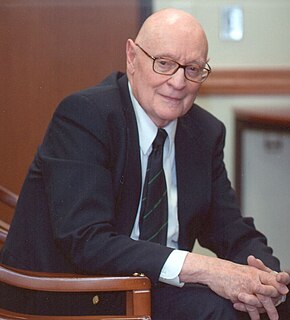 Nicholas Rescher is a German-American philosopher, polymath, and author, teaching at the University of Pittsburgh. He is the Chairman of the Center for Philosophy of Science and has formerly served as Chairman of the Philosophy Department.

Contextualism describes a collection of views in philosophy which emphasize the context in which an action, utterance, or expression occurs. These argue that, in some important respect, the action, utterance, or expression can only be understood relative to that context. Contextualist views hold that philosophically controversial concepts, such as "meaning P", "knowing that P", "having a reason to A", and possibly even "being true" or "being right" only have meaning relative to a specified context. Some philosophers hold that context-dependence may lead to relativism..

Naturalized epistemology, coined by W. V. O. Quine, is a collection of philosophic views concerned with the theory of knowledge that emphasize the role of natural scientific methods. This shared emphasis on scientific methods of studying knowledge shifts focus to the empirical processes of knowledge acquisition and away from many traditional philosophical questions. There are noteworthy distinctions within naturalized epistemology. Replacement naturalism maintains that traditional epistemology should be abandoned and replaced with the methodologies of the natural sciences. The general thesis of cooperative naturalism is that traditional epistemology can benefit in its inquiry by using the knowledge we have gained from the cognitive sciences. Substantive naturalism focuses on an asserted equality of facts of knowledge and natural facts.

Hilary Kornblith is an American philosopher. He is a professor of philosophy at the University of Massachusetts Amherst and one of contemporary epistemology's most prominent proponents of naturalized epistemology. 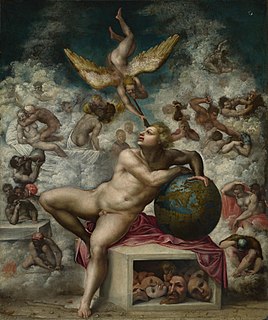 The dream argument is the postulation that the act of dreaming provides preliminary evidence that the senses we trust to distinguish reality from illusion should not be fully trusted, and therefore, any state that is dependent on our senses should at the very least be carefully examined and rigorously tested to determine whether it is in fact reality.

John Greco is an American philosopher. He is the Leonard and Elizabeth Eslick Chair in Philosophy at Saint Louis University. Greco received his Ph.D. from Brown University in 1989, where he studied under Ernest Sosa, and his AB from Georgetown University in 1983. His research interests are in epistemology and metaphysics and he has published widely on virtue epistemology, epistemic normativity, skepticism, and Thomas Reid. He is the Editor of American Philosophical Quarterly. For 2013-15, together with Eleonore Stump, he holds a $3.3 million grant from the John Templeton Foundation for a project on intellectual humility. 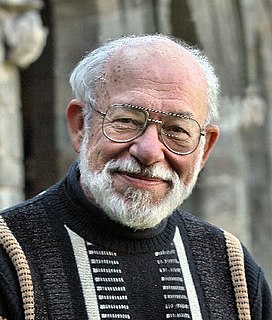 The Nicholas Rescher Prize for Systematic Philosophy was established by the University of Pittsburgh in 2009 to counter present-day tendencies to narrow specialization by rewarding and showcasing the work of philosophers who have addressed the historical “big questions” of the field in ways that nevertheless command the respect of specialists. Awarded biennially the prize consists of a gold medal together with a sum of $25,000. The prize is named for Nicholas Rescher, Distinguished University Professor of Philosophy, who has served on the university’s faculty for over 50 years. The recipients to date are: Ernest Sosa (2010), Alvin Plantinga and Jürgen Mittelstraß, Hilary Putnam (2015), and Ruth Millikan (2017).