In computer science, execute in place (XIP) is a method of executing programs directly from long term storage rather than copying it into RAM. It is an extension of using shared memory to reduce the total amount of memory required.

Its general effect is that the program text consumes no writable memory, saving it for dynamic data, and that all instances of the program are run from a single copy.

For this to work, several criteria have to be met:

The storage requirements are usually met by using NOR flash memory, which can be addressed as individual words for read operations, although it is a bit slower than normal system RAM in most setups.

Typically, the first stage boot loader is an XIP program that is linked to run at the address at which the flash chip(s) are mapped at power-up and contains a minimal program to set up the system RAM (which depends on the components used on the individual boards and cannot be generalized enough so that the proper sequence could be embedded into the processor hardware) and then loads the second stage bootloader or the OS kernel into RAM.

During this initialization, writable memory may not be available, so all computations have to be performed within the processor registers. For this reason, first stage boot loaders tend to be written in assembler language and only do the minimum to provide a normal execution environment for the next program. Some processors either embed a small amount of SRAM in the chip itself [1] , or allow using the onboard cache memory as RAM [2] , to make this first stage boot loader easier to write using high-level language.

For a kernel or bootloader, address space generally is assigned internally, so in order to use XIP for them, it is sufficient to instruct the linker to place unmodifiable and modifiable data in different address ranges and provide a mechanism for the modifiable data to be copied to writable memory before any code is run that assumes that data can be accessed normally. This can be done as part of the previous stage, or within a small code segment at the beginning of the program.

If address space is assigned externally, such as in an application program that is run on a system that does not provide virtual memory, the compiler needs to access all modifiable data by adding an offset to a pointer to a private copy of the data area. In this case, the external loader is responsible for setting up the instance specific memory areas.

XIP places requirements on file systems that are often difficult to meet. In systems without a page table, the entire file must be stored within consecutive bytes and must not be fragmented, while flash based file systems often aim to distribute data into sectors of the flash chip that have the least erase cycles and even out the wear on the chip, prolonging its lifetime.

All these complications and the speed tradeoff mean that XIP is generally only used for first stage bootloaders or when RAM is in extremely short supply. In particular, second through fourth generation video game consoles connect the ROM cartridge's address and data bus to that of the console, [3] which lets (for example) the Atari 2600 work with only the 128 bytes of RAM in its joystick interface IC.

A relatively new file system for Linux, called AXFS (Advanced XIP File System), aims to overcome some of the shortcomings associated with XIP, especially in regard to the in-place execution of user-space applications. It makes for instance possible to split up an executable binary file into "XIP regions", thus avoiding the restriction of fragmentation that was mentioned above.

A NetBSD implementation is also under development. [4]

In computing, booting is the process of starting a computer. It can be initiated by hardware such as a button press, or by a software command. After it is switched on, a computer's central processing unit (CPU) has no software in its main memory, so some process must load software into memory before it can be executed. This may be done by hardware or firmware in the CPU, or by a separate processor in the computer system.

GNU GRUB is a boot loader package from the GNU Project. GRUB is the reference implementation of the Free Software Foundation's Multiboot Specification, which provides a user the choice to boot one of multiple operating systems installed on a computer or select a specific kernel configuration available on a particular operating system's partitions.

A boot disk is a removable digital data storage medium from which a computer can load and run (boot) an operating system or utility program. The computer must have a built-in program which will load and execute a program from a boot disk meeting certain standards. 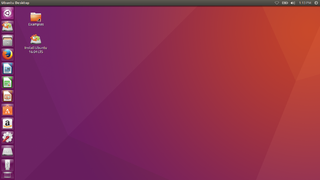 Copy-on-write (COW), sometimes referred to as implicit sharing or shadowing, is a resource-management technique used in computer programming to efficiently implement a "duplicate" or "copy" operation on modifiable resources. If a resource is duplicated but not modified, it is not necessary to create a new resource; the resource can be shared between the copy and the original. Modifications must still create a copy, hence the technique: the copy operation is deferred to the first write. By sharing resources in this way, it is possible to significantly reduce the resource consumption of unmodified copies, while adding a small overhead to resource-modifying operations.

The Macintosh Toolbox is a set of application programming interfaces with a particular access mechanism. They implement many of the high-level features of the Classic Mac OS. The Toolbox consists of a number of "managers," software components such as QuickDraw, responsible for drawing onscreen graphics, and the Menu Manager, which maintain data structures describing the menu bar. As the original Macintosh was designed without virtual memory or memory protection, it was important to classify code according to when it should be loaded into memory or kept on disk, and how it should be accessed. The Toolbox consists of subroutines essential enough to be permanently kept in memory and accessible by a two-byte machine instruction; however it excludes core "kernel" functionality such as memory management and the file system. Note that the Toolbox does not draw the menu onscreen: menus were designed to have a customizable appearance, so the drawing code was stored in a resource, which could be on a disk. 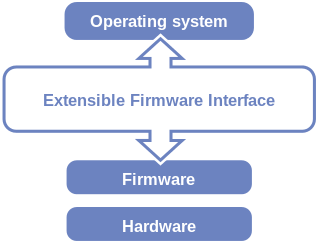 On Linux systems, vmlinux is a statically linked executable file that contains the Linux kernel in one of the object file formats supported by Linux, which includes ELF, COFF and a.out. The vmlinux file might be required for kernel debugging, symbol table generation or other operations, but must be made bootable before being used as an operating system kernel by adding a multiboot header, bootsector and setup routines.

coreboot, formerly known as LinuxBIOS, is a software project aimed at replacing proprietary firmware found in most computers with a lightweight firmware designed to perform only the minimum number of tasks necessary to load and run a modern 32-bit or 64-bit operating system.

quik is a boot loader designed to start Linux on Apple Macintosh PowerPC systems based on the Old World ROM architecture. It was originally written by Paul Mackerras, and portions of its code were reused in all other Linux boot loaders for PowerPC, including the one known as BootX, which is dependent on the Mac OS. Quik's loader boots from Open Firmware and bypasses the Mac OS entirely. New World ROM systems use yaboot.

Das U-Boot is an open-source, primary boot loader used in embedded devices to package the instructions to boot the device's operating system kernel. It is available for a number of computer architectures, including 68k, ARM, Blackfin, MicroBlaze, MIPS, Nios, SuperH, PPC, RISC-V and x86.

A live USB is a USB flash drive or external hard disk drive containing a full operating system that can be booted. They are the evolutionary next step after live CDs, but with the added benefit of writable storage on the live USB itself, allowing customizations to the booted operating system. Live USBs can be used in embedded systems for system administration, data recovery, or test driving, and can persistently save settings and install software packages on the USB device.

The EFIsystem partition or ESP is a partition on a data storage device that is used by computers adhering to the Unified Extensible Firmware Interface (UEFI). When a computer is booted, UEFI firmware loads files stored on the ESP to start installed operating systems and various utilities.

Linux startup process is the multi-stage initialization process performed during booting a Linux installation. It is in many ways similar to the BSD and other Unix-style boot processes, from which it derives.

AXFS is a compressed read-only file system for Linux, initially developed at Intel, and now maintained at Numonyx. It was designed to use execute in place (XIP) alongside compression aiming to reduce boot and program load times, while retaining a small memory footprint for embedded devices. This is achieved by mixing compressed and uncompressed pages in the same executable file. AXFS is free software.