Felipe Enrique "Henry" Lapuz Gozon (born December 8, 1939), [1] is a Filipino lawyer and the chairman and CEO of GMA Network Inc., one of the largest media networks in the Philippines.

A lawyer by profession, the Yale-educated Gozon is seen as the network executive who has successfully turned-around GMA from its state as the one of the leading television networks in the Philippines to its current stature, at some point toppling the long-dominant ABS-CBN in 1997 and 2004 from their nationwide stronghold until today in the Mega Manila ratings. Under his watch, the network has also experienced stability in terms of revenues, mostly from advertising and other revenue sources. [3]

As a distinguished aviation lawyer, he was a member of the Philippine Air Negotiating Panel and is cited in the Asia Pacific Legal 500 as a leading expert in this field.

His business experience includes acting as a director of the International Corporate Bank and as chairman of Marcopper Mining Corporation. Atty. Gozon has been the chairman of the board of directors of the company since 1975. [5] He currently holds the positions of chairman, president and chief executive officer. Since assuming leadership of the company in October 2000, the company’s ratings have improved greatly, surpassing its nearest competitor in 2003. Atty. Gozon was named CEO of the Year by UNO Magazine in 2004 and Master Entrepreneur of the Year (Philippines) 2004 by SGV & Co./Ernst & Young in 2005. People Asia Magazine included him in the list of People of the Year 2005. He is also currently chairman, vice-chairman or director of several other institutions such as the Malayan Bank Savings & Mortgage Bank, the Children’s Museum and Library, Inc., Asian Institute of Journalism and Communication and the Nova Foundation for Differently Abled Persons, Inc. He is also a director and/or chairman of some of the subsidiaries and affiliates of the company, such as GMA New Media, GMA Films, Alta Productions, Citynet, GMA Marketing and Productions, Inc., Scenarios, Inc., EMC Network, Inc., GMA Kapuso Foundation, INQ7 Interactive, Inc., GMA Records, Mont-Aire and Kapwa Ko Mahal Ko. [6]

Gozon was among the 61 awardees that included Reynato Puno, who were honored as UP’s distinguished alumni by the UP Alumni Association (UPAA) at the Araneta Coliseum on June 21, 2008. Gozon received an award for the Lapuz-Gozon family whose members up to the third generation studied in UP. [7] 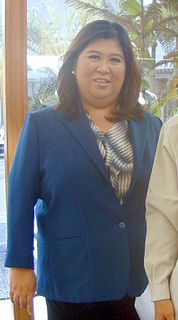 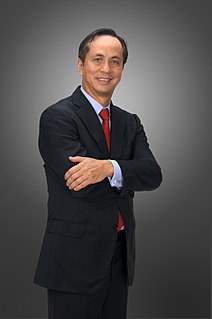 Eugenio Gabriel "Gabby" La'O López III is a Filipino-American businessman who was the CEO (1993–2013), chairman (1997–2018) and chairman emeritus (2018–2020) of ABS-CBN Corporation, the largest entertainment and media conglomerate in the Philippines.

Washington Z. SyCip, PLH BOLk RNO1kl was a Chinese-Filipino-American accountant. He was the founder of the accounting firm EY SGV & Company and the Asian Institute of Management.

Rodolfo Valentino Padilla Fernandez, better known as Rudy Fernandez or Daboy was a multi-awarded Filipino actor, and producer. He came to prominence as an action star in the Philippine cinema during the 1980s up to the early 1990s.

GMA Artist Center is a talent agency based in Metro Manila, Philippines that was founded in 1995.

Rafael "Raffy" Puchero Nantes was the governor of the Province of Quezon, Philippines from 2007 to 2010. He was the national treasurer of the Liberal Party. He first served as a congressman of the 1st District of Quezon from 1998 to 2007.

Regina Paz "Gina" La'o Lopez was a Filipino environmentalist and philanthropist who served as Secretary of the Philippines' Department of Environment and Natural Resources (DENR) in an ad interim basis under President Rodrigo Duterte. She was previously the Chairperson of the Pasig River Rehabilitation Commission under two consecutive administrations. Lopez was also a yoga missionary and a pioneer for corporate social responsibility.

The Outstanding Manilan Award, also known as the Outstanding Manilan Medallion of Honor, is conferred annually on recipients in fields including business, communications, diplomacy, finance, public service and spiritual leadership. It is given out by the City of Manila. The award was established in 1980.

Gilberto "Bibit" Muñoz Duavit, Sr. was a Filipino lawyer, entrepreneur and politician. He was a major figure in the GMA Network Inc. and a member of the House of Representatives from 1994 to 2001.