The Franklin Silver Cornet Band, formed in 1856, is one of the oldest volunteer community bands in the United States. The band plays concerts throughout the summer months in Franklin, Pennsylvania as well as an indoor concert in Franklin's Barrow-Civic Theatre the day after Thanksgiving.

The Franklin Silver Cornet Band is the only non-military band to appear at both the Centennial and Bicentennial celebrations in Philadelphia. The band has made a number of other out-of-town appearances over the years, including performances at the Chautauqua Institution in Chautauqua, New York, Hersheypark, the Smithsonian Institution in Washington, DC, and the Henry Ford Museum.

The band incorporated in the summer of 1873 with seventeen members, including a carriage maker, a dentist, a well worker, and several Civil War veterans. John E. Butler, one of the veterans, had traveled on an orphan train to Princeton, Indiana, where he was a drummer boy with the 17th Indiana Brigade. [1]

The first known director of the band was William Bell, who had been a cornet player in his native England. Later directors of the band included Charles Brassington, who led the band from the 1880s until 1918, Charles Ackley, who had led the "house" band at Cedar Point amusement park, and Edwin W. Frye, who served the longest in that capacity, retiring from active bandmastering in 2000. [1]

The band faced occasional difficulties. Hanna's Hall, where the band's rooms were located, burned down in 1886. The band itself briefly disbanded in 1919 but was aided in revival by the remnants of the Rocky Grove Band. In the 1950s, the band was sometimes no larger than a dozen men, and in the 1960s, it entered a joint venture with the American Legion Band of Oil City.

The book Musical Service: The Life and Times of the Franklin Silver Cornet Band retells the band's history.

Chautauqua was an adult education and social movement in the United States, highly popular in the late 19th and early 20th centuries. Chautauqua assemblies expanded and spread throughout rural America until the mid-1920s. The Chautauqua brought entertainment and culture for the whole community, with speakers, teachers, musicians, showmen, preachers, and specialists of the day. Former U.S. President Theodore Roosevelt was quoted as saying that Chautauqua is "the most American thing in America."

The Chautauqua Institution is a 501(c)(3) nonprofit education center and summer resort for adults and youth located on 2,070 acres (8.4 km2) in Chautauqua, New York, 17 miles (27 km) northwest of Jamestown in the southwestern part of New York State. Established in 1874, the institution was the home and provided the impetus for the Chautauqua movement that became popular in the US in the late 19th and early 20th centuries. The Chautauqua Institution Historic District is listed on the National Register of Historic Places and was further designated a National Historic Landmark.

Maryland is a U.S. state with a musical heritage that dates back to the Native Americans of the region and includes contributions to colonial era music, modern American popular and folk music. The music of Maryland includes a number of popular musicians, folk styles and a documented music history that dates to the colonial archives on music from Annapolis, an important source in research on colonial music. Famous modern musicians from Maryland range from jazz singer Billie Holiday to pop punk band Good Charlotte, and include a wide array of popular styles.

A British brass band is a musical ensemble comprising a standardized range of brass and percussion instruments. The modern form of the brass band in the United Kingdom dates back to the 19th century, with a vibrant tradition of competition based around communities and local industry, with colliery bands being particularly notable. The Stalybridge Old Band was formed in 1809 and was perhaps the first civilian brass band in the world. 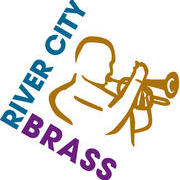 The River City Brass Band is a modified British-style brass band based in Pittsburgh, Pennsylvania. The 28-piece ensemble tours extensively throughout the United States and performs more than 35 concerts each year as part of their community concert series in Western Pennsylvania. 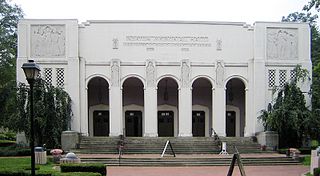 Herbert Lincoln Clarke was an American cornetist, feature soloist, bandmaster, and composer. He is considered the most prominent cornetist of his time.

The Spartan Marching Band (SMB) is the marching band of Michigan State University. The band has over 300 members and is the second oldest in the Big Ten Conference, with its founding in 1870. Notable music educator Leonard Falcone directed the band from 1927 through 1967.

Promenade concerts were musical performances in the 18th and 19th century pleasure gardens of London, where the audience would stroll about while listening to the music. The term derives from the French se promener, "to walk". 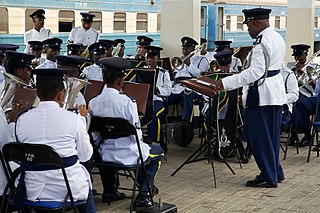 A brass band is a musical ensemble generally consisting entirely of brass instruments, most often with a percussion section. Ensembles that include brass and woodwind instruments can in certain traditions also be termed brass bands, but may more correctly termed military bands, concert bands, or "brass and reed" bands. 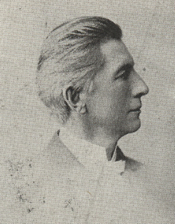 The Eastern Iowa Brass Band (EIBB) is an amateur band which performs brass band literature in the style and tradition of the British brass bands which date back to the early nineteenth century and continues today.

Toddington Town Band is an English brass band. For over one hundred years, Toddington Town Band has brought music to audiences across Bedfordshire and beyond. They currently have more than thirty five active players of all ages and standards. Their extensive library of over 400 pieces of music means they are able to play a wide range of music of differing genres. 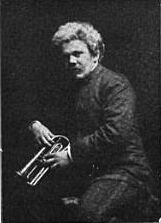 Bohumir Kryl was a Czech-American financial executive and art collector who is most famous as a cornetist, bandleader, and pioneer recording artist, for both his solo work and as a leader of popular and Bohemian bands. He was one of the major creative figures in the era of American music known as the "Golden Age of the Bands".

William Hall Sherwood was a late 19th and early 20th century American pianist and music educator who, after having studied in Europe with notable musicians, became one of the first renowned piano performers in the United States. He founded the Sherwood Music School, which was acquired by Columbia College Chicago in 2007. 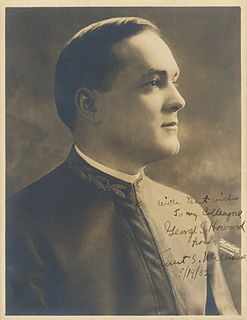 Walter Bowman Rogers was an American cornet player, concert band and orchestral conductor and composer, who was responsible for most of the orchestral arrangements on recordings made for the Victor Talking Machine Company between 1904 and 1916.

Augustus John Turner,, known as "A. J. Turner", was an American composer, band leader and music professor. He was the first director of the Stonewall Brigade Band of Staunton, Virginia, the oldest continuous community band funded by tax moneys in the United States. They were mustered into the Stonewall Brigade under Stonewall Jackson of the Confederacy during the Civil War. Turner was a professor of music at both the Wesleyan Female Institute and the Deaf, Dumb, and Blind Institute, and he played a part in the temperance movement.

The Stonewall Brigade Band is a community concert band based in Staunton, Virginia. It is the United States's oldest continuous community band sponsored by local government and funded, in part, by tax monies. Originally a brass band, the band was formed in 1855 as the Mountain Sax Horn Band. It was also called Turner's Silver Cornet Band by 1859, for its first director, A. J. Turner. At the onset of the American Civil War, the band was mustered into the 5th Virginia Infantry Regiment, part of the Stonewall Brigade under Stonewall Jackson.