A musical ensemble, also known as a music group or musical group, is a group of people who perform instrumental or vocal music, with the ensemble typically known by a distinct name. Some music ensembles consist solely of instrumentalists, such as the jazz quartet or the orchestra. Other music ensembles consist solely of singers, such as choirs and doo wop groups. In both popular music and classical music, there are ensembles in which both instrumentalists and singers perform, such as the rock band or the Baroque chamber group for basso continuo (harpsichord and cello) and one or more singers. In classical music, trios or quartets either blend the sounds of musical instrument families (such as piano, strings, and wind instruments) or group together instruments from the same instrument family, such as string ensembles (e.g., string quartet) or wind ensembles (e.g., wind quintet). Some ensembles blend the sounds of a variety of instrument families, such as the orchestra, which uses a string section, brass instruments, woodwinds and percussion instruments, or the concert band, which uses brass, woodwinds and percussion.

Music ensembles typically have a leader. In jazz bands, rock and pop groups and similar ensembles, this is the band leader. In classical music, orchestras, concert bands and choirs are led by a conductor. In orchestra, the concertmaster (principal first violin player) is the instrumentalist leader of the orchestra. In orchestras, the individual sections also have leaders, typically called the "principal" of the section (e.g., the leader of the viola section is called the "principal viola"). Conductors are also used in jazz big bands and in some very large rock or pop ensembles (e.g., a rock concert that includes a string section, a horn section and a choir which are accompanying a rock band's performance).

In Western classical music, smaller ensembles are called chamber music ensembles. The terms duo, trio, quartet, quintet, sextet, septet, octet, nonet and decet describe groups of two up to ten musicians, respectively. A group of eleven musicians, such as found in The Carnival of the Animals , is called an undecet, and a group of twelve is called a duodecet (see Latin numerical prefixes). A soloist playing unaccompanied (e.g., a pianist playing a solo piano piece or a cellist playing a Bach suite for unaccompanied cello) is not an ensemble because it only contains one musician.

A string quartet consists of two violins, a viola and a cello. There is a vast body of music written for string quartets, as it is seen as an important genre in classical music.

A woodwind quartet usually features a flute, an oboe, a clarinet and a bassoon. A brass quartet features two trumpets, a trombone and a tuba. A saxophone quartet consists of a soprano saxophone, an alto saxophone, a tenor saxophone, and a baritone saxophone.

The string quintet is a common type of group. It is similar to the string quartet, but with an additional viola, cello, or more rarely, the addition of a double bass. Terms such as "piano quintet" or "clarinet quintet" frequently refer to a string quartet plus a fifth instrument. Mozart's Clarinet Quintet is similarly a piece written for an ensemble consisting of two violins, a viola, a cello and a clarinet, the last being the exceptional addition to a "normal" string quartet.[ citation needed ]

Classical chamber ensembles of six (sextet), seven (septet), or eight musicians (octet) are fairly common; use of latinate terms for larger groups is rare, except for the nonet (nine musicians). In most cases, a larger classical group is referred to as an orchestra of some type or a concert band. A small orchestra with fifteen to thirty members (violins, violas, four cellos, two or three double basses, and several woodwind or brass instruments) is called a chamber orchestra. A sinfonietta usually denotes a somewhat smaller orchestra (though still not a chamber orchestra). Larger orchestras are called symphony orchestras (see below) or philharmonic orchestras. [1]

A symphony orchestra is an ensemble usually comprising at least thirty musicians; the number of players is typically between fifty and ninety-five and may exceed one hundred. A symphony orchestra is divided into families of instruments. In the string family, there are sections of violins (I and II), violas, cellos (often eight), and basses (often from six to eight). The standard woodwind section consists of flutes (one doubling piccolo), oboes (one doubling English horn), soprano clarinets (one doubling bass clarinet), and bassoons (one doubling contrabassoon). The standard brass section consists of horns, trumpets, trombones, and tuba. The percussion section includes the timpani, bass drum, snare drum, and any other percussion instruments called for in a score (e.g., triangle, glockenspiel, chimes, cymbals, wood blocks, etc.). In Baroque music (1600–1750) and music from the early Classical period music (1750–1820), the percussion parts in orchestral works may only include timpani.[ clarification needed ]

Women have a high prominence in many popular music styles as singers. However, professional women instrumentalists are uncommon in popular music, especially in rock genres such as heavy metal. "[P]laying in a band is largely a male homosocial activity, that is, learning to play in a band is largely a peer-based... experience, shaped by existing sex-segregated friendship networks." [2] As well, rock music "...is often defined as a form of male rebellion vis-à-vis female bedroom culture." [3] In popular music, there has been a gendered "distinction between public (male) and private (female) participation" in music. [3] "[S]everal scholars have argued that men exclude women from bands or from the bands' rehearsals, recordings, performances, and other social activities." [4] "Women are mainly regarded as passive and private consumers of allegedly slick, prefabricated – hence, inferior – pop music..., excluding them from participating as high status rock musicians." [4] One of the reasons that there are rarely mixed gender bands is that "bands operate as tight-knit units in which homosocial solidarity – social bonds between people of the same sex... – plays a crucial role." [4] In the 1960s pop music scene, "[s]inging was sometimes an acceptable pastime for a girl, but playing an instrument...simply wasn't done." [5]

"The rebellion of rock music was largely a male rebellion; the women—often, in the 1950s and '60s, girls in their teens—in rock usually sang songs as personæ utterly dependent on their macho boyfriends..." Philip Auslander says that "Although there were many women in rock by the late 1960s, most performed only as singers, a traditionally feminine position in popular music." Though some women played instruments in American all-female garage rock bands, none of these bands achieved more than regional success. So they "did not provide viable templates for women's on-going participation in rock". [6] : 2–3  In relation to the gender composition of heavy metal bands, it has been said that "[h]eavy metal performers are almost exclusively male" [7] "...[a]t least until the mid-1980s" [8] apart from "...exceptions such as Girlschool". [7] However, "...now [in the 2010s] maybe more than ever–strong metal women have put up their dukes and got down to it," [9] "carv[ing] out a considerable place for [them]selves". [10] When Suzi Quatro emerged in 1973, "no other prominent female musician worked in rock simultaneously as a singer, instrumentalist, songwriter, and bandleader." [6] : 2  According to Auslander, she was "kicking down the male door in rock and roll and proving that a female musician ... and this is a point I am extremely concerned about ... could play as well if not better than the boys". [6] : 3

A group that plays popular music or military music is usually called a band; a drum and bugle corps is a type of the latter. These bands perform a wide range of music, ranging from arrangements of jazz orchestral, or popular music to military-style marches. Drum corps perform on brass and percussion instruments only. Drum and Bugle Corps incorporate costumes, hats, and pageantry in their performances.

Other band types include:

In music, a decet—sometimes dectet, decimette, or even tentet—is a composition which requires ten musicians for a performance, or a musical group that consists of ten people. The corresponding German word is Dezett, the French is dixtuor. Unlike some other musical ensembles such as the string quartet, there is no established or standard set of instruments in a decet. 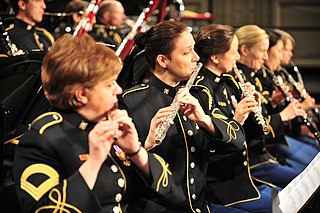 Raymond Luedeke is an American / Canadian composer of contemporary classical music. Praised for his idiosyncratic instrumental writing and for his orchestration, Luedeke has more recently concentrated on works for music theatre. Although born in New York City, he spent 29 years as Associate Principal Clarinet with the Toronto Symphony Orchestra, a position he left in 2010. A dual citizen of the United States and Canada, Ray Luedeke is artistic director of Voice Afire Opera-Cabaret in New York City.