Last updated October 28, 2021
This article is about the musical term. For other uses of trio, see Trio (disambiguation).

In music, a trio (from the Italian) is any of the following:

In the 17th and early 18th century, musical genre trio sonata two melodic instruments are accompanied by a basso continuo, making three parts in all. Because the basso continuo is usually played by two instruments (typically a cello or bass viol and a keyboard instrument such as the harpsichord), performances of trio sonatas typically involve more musicians. However there are also examples for a single performer such as Bach's Organ Sonatas or Trios, BWV 525–30 for two hands and feet, and also for two performers, such as his Violin Sonatas, Viol Sonatas and Flute Sonata, in which the harpsichordist's right hand performs a melodic part.

In vocal music with or without accompaniment, the term terzet is sometimes preferred to "trio". [1]

From the 17th century onward, trio has been used to describe a contrasting second or middle dance appearing between two statements of a principal dance, such as a minuet or bourée. This second dance was originally called a trio because of the 17th-century practice of scoring it for three instruments, and later examples continued to be referred to as trios, even when they involved a larger number of parts. [2] [3] The Menuet of Bach's Brandenburg Concerto No. 1 (1721) is a late nod to the original practice, with trios for two oboes and bassoon as well as two horns and a third part played by three oboes in unison.

Derived from the compositions, trio often denotes a group of three solo instruments or voices. [2] The most common types of such compositions are the piano trio of typically piano, violin and cello, and the string trio of commonly violin, viola and cello. [3]

Other types of trio include [ citation needed ]: 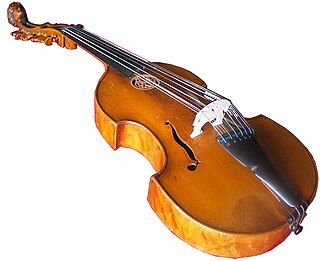 The viola d'amore is a 7- or 6-stringed musical instrument with sympathetic strings used chiefly in the baroque period. It is played under the chin in the same manner as the violin.

Israel Sharon is an Israeli composer, pianist, arranger and conductor. 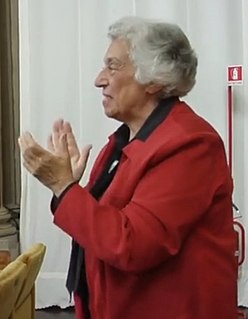 Teresa Procaccini is an Italian composer and music educator.