Raphael was born to a Jewish family, [1] in Chicago, Illinois, the son of Irene Rose (née Mauser) and Cedric Michael Raphael, an employee of the Shell Oil Co. [2] . He moved to Putney, London, England, in 1938 aged 7, when his parents emigrated to the United Kingdom.

Frederic Raphael was born in St. Louis, Missouri, to an American Jewish mother from Chicago, Irene Rose (nee Mauser) and a British Jewish father, Cederic Michael Raphael, who was an employee of the Shell Oil Company who had been transferred to the United States from Shell's London office. The family returned to England and settled in a London suburb in 1937.

His articles and book reviews appear in a number of newspapers and magazines, including the Los Angeles Times and The Sunday Times . He has published more than twenty novels, the best-known being the semi-autobiographical The Glittering Prizes (1976), which traces the lives of a group of Cambridge University undergraduates in post-war Britain as they move through university and into the wider world. The original six-part BBC television series, from which the book was adapted, won him a Royal Television Society Writer of the Year Award. [3] Fame and Fortune , which continues the story to 1979, was adapted in 2007 and broadcast on BBC Radio 4, television channels having refused to commission the sequel themselves. In 2010, BBC Radio 4 broadcast a further sequel in a series entitled Final Demands , with Tom Conti as Adam Morris, the central character, bringing the story to the late 1990s.

Raphael has published several history books, collections of essays and translations. He has also written biographies of Somerset Maugham and Lord Byron. He was made a Fellow of the Royal Society of Literature in 1964.

In 1999, Raphael published Eyes Wide Open, a memoir of his collaboration with the director Stanley Kubrick on the screenplay of Eyes Wide Shut , Kubrick's final movie. Raphael wrote a detailed account of his working with Kubrick, based on his own journals, but upon its publication the book was publicly criticised by several of the director's friends and family members, among them Christiane Kubrick, [4] Jan Harlan, [5] and Michael Herr [6] [ self-published source ], for its unflattering portrayal of him.

Referring to an article by Raphael about his book in the New Yorker, Steven Spielberg and Tom Cruise also professed criticism. [7] [8]

He married Sylvia Betty Glatt on 17 January 1955, and they had three children.

Stanley Kubrick was an American film director, screenwriter, producer and photographer. He is frequently cited as one of the most influential filmmakers in cinematic history. His films, which are mostly adaptations of novels or short stories, cover a wide range of genres, and are noted for their realism, dark humor, unique cinematography, extensive set designs, and evocative use of music.

"The Sentinel" is a science fiction short story by British author Arthur C. Clarke, written in 1948 and first published in 1951 as "Sentinel of Eternity", which was used as a starting point for the novel and film 2001: A Space Odyssey. 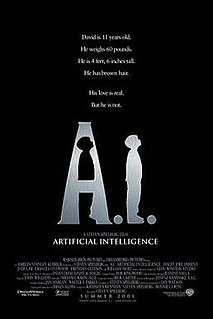 A.I. Artificial Intelligence is a 2001 American science fiction drama film directed by Steven Spielberg. The screenplay by Spielberg and screen story by Ian Watson were loosely based on the 1969 short story "Supertoys Last All Summer Long" by Brian Aldiss. The film was produced by Kathleen Kennedy, Spielberg and Bonnie Curtis. It stars Haley Joel Osment, Jude Law, Frances O'Connor, Brendan Gleeson and William Hurt. Set in a futuristic post-climate change society, A.I. tells the story of David (Osment), a childlike android uniquely programmed with the ability to love.

Archibald MacLeish was an American poet and writer who was associated with the modernist school of poetry. MacLeish studied English at Yale University and law at Harvard University. He enlisted in and saw action during the First World War and lived in Paris in the 1920s. On returning to the United States, he contributed to Henry Luce's magazine Fortune from 1929 to 1938. For five years MacLeish was Librarian of Congress, a post he accepted at the urging of President Franklin D. Roosevelt. From 1949 to 1962, he was Boylston Professor of Rhetoric and Oratory at Harvard University. He was awarded three Pulitzer Prizes for his work.

Rhapsody: A Dream Novel, also known as Dream Story, is a 1926 novella by the Austrian writer Arthur Schnitzler. The book deals with the thoughts and psychological transformations of Doctor Fridolin over a two-day period after his wife confesses having had sexual fantasies involving another man. In this short time, he meets many people who give clues to the world Schnitzler creates. This culminates in the masquerade ball, a wondrous event of masked individualism, sex, and danger for Fridolin as the outsider.

Colour Me Kubrick: A True...ish Story is a Franco-British comedy-drama film directed by Brian W. Cook and released in 2005. The film stars John Malkovich as Alan Conway, a man who had been impersonating director Stanley Kubrick since the early 1990s. The film follows the exploits of Conway as he goes from person to person, convincing them to give out money, liquor and sexual favours for the promise of a part in "Kubrick's" next film. The soundtrack, Colour Me Kubrick: The Original Soundtrack featured five songs co-written by Bryan Adams.

Michael David Herr was an American writer and war correspondent, known as the author of Dispatches (1977), a memoir of his time as a correspondent for Esquire magazine (1967–1969) during the Vietnam War. The book was called the best "to have been written about the Vietnam War" by The New York Times Book Review. Novelist John le Carré called it "the best book I have ever read on men and war in our time."

Christiane Susanne Kubrick is a German actress, dancer, painter, and singer. She was born into a theatrical family, and was the wife of filmmaker Stanley Kubrick from 1958 until his death in 1999.

Jan Harlan is a German-American executive producer and the brother of Christiane Kubrick, director Stanley Kubrick's widow. He is the nephew of the film director Veit Harlan.

Andrew Timothy Birkin is an English screenwriter, director and occasional actor. He was born the only son of Lieutenant-Commander David Birkin and his wife, actress Judy Campbell. One of his sisters is the actress and singer Jane Birkin.

Wartime Lies is a semi-autobiographical novel by Louis Begley first published in 1991. Set in Poland during the years of the Nazi occupation, it is about two members of an upper middle class Jewish family, a young woman and her nephew, who avoid persecution as Jews by assuming Catholic identities. Time and again the boy, who narrates the story from some remote point in time, reminisces about how he learned at an early age to lie in order to survive. Thus, his whole adult life is founded on the "wartime lies" of his childhood.

Eyes Wide Open may refer to:

David Henry Benedictus is an English writer and theatre director, best known for his novels. His work includes the Winnie-the-Pooh novel Return to the Hundred Acre Wood (2009). It was the first such book in 81 years.

The following is a list of unproduced Stanley Kubrick projects in roughly chronological order. During his long career, American film director Stanley Kubrick has worked on a number of projects which never progressed beyond the pre-production stage under his direction. Some of these projects fell into development hell or are officially cancelled.

The political and religious views of filmmaker Stanley Kubrick (1928–1999) have been subjects of speculation during his lifetime and after his death. While early films like Paths of Glory (1957) seem to reflect an overtly progressive ideology, later films such as Dr. Strangelove (1964) and A Clockwork Orange (1971) can be construed as equally critical of the political left and right. Despite the lack of commitment to a particular world-view, it is generally agreed that Kubrick was fascinated by the possibilities of a supernatural reality, as reflected in 2001: A Space Odyssey (1968) and The Shining (1980).

A list of books and essays about Stanley Kubrick and his films:

Stanley Kubrick directed 13 feature films and three short documentaries over the course of his career, from Day of the Fight in 1951 to Eyes Wide Shut in 1999. Many of Kubrick's films were nominated for Academy Awards or Golden Globes, but his only personal win of an Academy Award was for his work as director of special effects on 2001: A Space Odyssey.

The personal life of Stanley Kubrick: