Golden Gate Fields is an American horse racing track straddling both Albany, California and Berkeley, California along the shoreline of San Francisco Bay adjacent to the Eastshore Freeway in the San Francisco Bay Area. With the closing of the Bay Meadows racetrack on May 11, 2008, it became the only major thoroughbred racetrack in Northern California. It is currently owned by The Stronach Group.

Golden Gate racetrack is situated on a tract of land bordered on the west by Fleming Point, a rocky promontory which lies on the eastern shoreline of San Francisco Bay. On the north, it is bordered by the Albany Bulb, Albany Beach and Albany Plateau, undeveloped terrain over a former landfill, owned by the City of Albany. To the east is Interstate 80 and to the south, the Berkeley Meadow. This tract lies on what was once a part of the slough into which three creeks drain: Schoolhouse Creek, Codornices Creek and Marin Creek. The tract had originally been that portion of the Rancho San Antonio owned by José Domingo Peralta. He sold it in July 1852 to John Fleming, who used it as a transhipment point for sending his cattle across the bay to San Francisco for slaughter and processing. Later in the 19th century, it was the site of the Giant Powder Company, a manufacturer of dynamite and nitroglycerin. Between 1879 and 1892, the plant blew up twice.

Just before World War II, Golden Gate Fields built its new grandstand up against the eastern slope of Fleming Point, and adjacent marshland was filled in for the track. The inaugural meet was on February 1, 1941. In the period just before the war, the track was used as the scene of the crime central to the plot of the movie Shadow of the Thin Man .

With the onset of World War II, the United States Navy took over the property as the Naval Landing Force Equipment Depot, Albany for storing hundreds of landing craft destined for use in the Pacific theater. [2] After the war, Golden Gate Fields resumed horse racing.

Golden Gate made history in 2016 when it hired 29-year-old Angela Hermann as its track announcer, succeeding Michael Wrona. Hermann was the first full-time female race caller in the United States since Ann Elliott worked in the 1960s at Jefferson Downs near New Orleans. [4] [5]

In 1957, the horse Silky Sullivan came to the track and with him came the excitement that followed him throughout his life. Until the death of Lost in the Fog, he was also the only horse to be buried in the infield. Lost in the Fog's plaque is the third to be placed at Golden Gate Fields, found near the one for Silky Sullivan and that for Bill Shoemaker.

In 1974, the first $2 million day in Northern California was held on California Derby Day.

Before his death in 2006, Lost in the Fog was based here. On September 17, 2006, he was euthanized due to inoperable tumors found on his spleen and along his spine. Prior to his early death, Lost in the Fog ran three races at his home base — winning twice, and placing once. On September 30, 2006 Golden Gate Fields held a celebration of his life.

During the summer of 2007, the racetrack installed a polymer synthetic type racing surface as mandated by the California Horse Racing Board. The Tapeta Footings synthetic all-weather racing surface is designed to make racing safer for both horses and riders.

Shared Belief, the Champion 2-year-old colt of 2013, was based at the track and won several races there. [7]

With the loss of Bay Meadows to developers in 2008, Golden Gate Fields has become Northern California's only major racetrack (aside from the racetracks associated with the summer fair circuit). The California Horse Racing Board (CHRB) sets the specific racing dates each year, but there is customarily a long winter/spring meet running from late December to mid June, and a fall meet running from mid October to mid December. [8] Starting in 2010, a summer meet was added with dates based around the summer fair circuit. [9] On June 15, 2016, the CHRB presented a proposed 2017 calendar that would eliminate the summer meet. [10]

AC Transit, the local public transit agency, provided a seasonal bus service, line 304, between the track and North Berkeley BART station until 2008. [11] The track is also accessible from the Gilman Street and Albany exits of the Eastshore Freeway, as well as from adjacent city streets. The San Francisco Bay Trail, a bicycle and walking path passes between the bay and the stands. [12] . In 2009 East Shore Charter Lines was contracted to provide the racetrack with a new free service from the BART station. [13]

The following Graded events were held at Golden Gate Fields in 2020.

Saratoga Race Course is a Thoroughbred horse racing track located on Union Avenue in Saratoga Springs, New York, United States. Opened in 1863, it is often considered to be the oldest major sporting venue of any kind in the country, but is actually the fourth oldest racetrack in the US. In 1857 the Empire Race Course was opened on an island in the Hudson River near Albany, but was in operation only a short time.

Russell Avery Baze is a retired horse racing jockey. He holds the record for the most race wins in North American horse racing history, and is a member of the United States Racing Hall of Fame and the State of Washington Sports Hall of Fame.

Lost in the Fog Save the Day was an American thoroughbred race horse. He won his first 10 starts, 11 of his 14 lifetime starts across the country, and career earnings of $978,099. He died of lymphoma during his four-year-old season and his remains were buried at Golden Gate Fields next to Silky Sullivan.

The El Camino Real Derby is a Listed American Thoroughbred horse race held in February at Golden Gate Fields in Albany, California. The race is open to three-year-olds willing to race one and one-eighth miles on Tapeta, a synthetic racing surface.

Shannon (1941–1955), named Shannon II in America, was an outstanding Australian Thoroughbred racehorse who was inducted into the Hall of Fame. He created new racecourse records in Australia before he was sold to an American buyer who exported him to California in 1948. There Shannon equalled the world record of 1:473⁄5 for the nine furlongs in winning the Forty Niner Handicap Stakes, then one week later equalled the world record of 1:594⁄5 for a mile and a quarter. Shannon was named the 1948 American Champion Older Male Horse. At stud in America he proved to be a good sire.

The Silky Sullivan Handicap is an American Thoroughbred horse race run each year at Golden Gate Fields in the San Francisco Bay Area. Named for the "Heart Attack Horse," the great closer Silky Sullivan, the race was a mile and an eighth, or 9 furlong Grade III turf race——run on grass——with a purse of $100,000 which it has retained. It is open to males or females three years of age, and runs at a distance of a mile and a sixteenth.

The Berkeley Handicap is a Grade III American Thoroughbred horse race for horses age three and older over a distance of one and one sixteenth miles with handicap conditions on the Tapeta, a synthetic racing surface held annually in November at Golden Gate Fields in Berkeley, California. The event offers a purse of US$100,000.

The Pacific Heights Stakes is run each year at Golden Gate Fields in the San Francisco Bay Area. Named for a hilly section of the city of San Francisco, the race is restricted to California bred fillies and mares, 3 years old and up, and run at a distance of 8 furlongs on the turf. 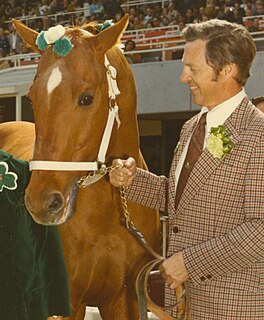 Silky Sullivan was an American thoroughbred race horse best known for his come-from-behind racing style. His name is now a term used in sports and politics for someone who seems so far behind the competition that they cannot win, yet they do.

The Tiburon Handicap is an American Thoroughbred ungraded stakes race for three-year-old fillies run early each year at Golden Gate Fields. Set at a distance of six furlongs, the sprint now offers a purse of $75,000.

The Lost in the Fog Stakes is an American ungraded stakes run at Golden Gate Fields in Albany, California for Thoroughbred two-year-old horses. A five-furlong sprint, the race is named in honor of Lost in the Fog, the brilliant sprinter who made his name between 2004 and 2006 before dying of lymphoma at age four.

The All American Stakes is a Listed American Thoroughbred race for horses three-years-old and older over a distance of one mile on the turf at Golden Gate Fields, Berkeley, California. It currently offers a purse of $100,000.

Royal Tourist (1905–1909) was an American Thoroughbred racehorse who won the American Classic Preakness Stakes in 1908 and who later that year set a World Record time in winning the Winters Handicap at Emeryville Race Track in Oakland, California.

John W. Sadler is an American horse trainer in the sport of Thoroughbred horse racing. He’s got over 2,600 race wins, including the 2018 Breeders' Cup Classic with Accelerate, who was subsequently named American Horse of the Year. He has won multiple training titles at Santa Anita Park, Del Mar and the now defunct Hollywood Park. Sadler currently trains Rock Your World, one of the leading contenders for the 2021 Kentucky Derby and the 2021 Belmont Stakes.

Martin Garcia is a jockey in American Thoroughbred horse racing based in Southern California.

The California Oaks is an American Thoroughbred horse race held annually in February at Golden Gate Fields in Berkeley, California. Open to three-year-old fillies, it is contested on Tapeta Footings synthetic dirt over a distance of a mile and a sixteenth.

My Juliet (1972–2001) was an American Thoroughbred champion racehorse who defeated both male and female competitors when earning the Eclipse Award for Outstanding Sprint Horse in 1976. She was inducted into the National Museum of Racing and Hall of Fame in 2019.

The Golden Gate Fields Turf Stakes was an American Thoroughbred horse race run annually at Golden Gate Fields in Albany, California. The race was open to horses four-year-olds and up willing to race one and three-eighth miles on the turf and offered a purse of $250,000 at its last running.

The Yerba Buena Stakes is a discontinued race for Thoroughbred fillies and mares age three and older. It was run on turf at Golden Gate Fields race track in Albany, California from 1973 through 2000 and again from 2005 through 2009. Between 2001 through 2004 the race was hosted by Bay Meadows Racetrack in San Mateo, California.