The Gomphrenoideae are a subfamily of the Amaranthaceae.

The stamens have anthers with only one lobe (locule) and two pollen sacs. Many species show C4-photosynthesis pathway. [1]

The center of diversity lies in Central America, Mexico and the dry forests and thorn bush savannas of South America. [2]

According to phylogenetic research by Sanchez Del-Pino (2009), the subfamily Gomphrenoideae Schinz is regarded as a monophyletic taxon with 19 genera and about 300-400 species. The traditional classification with two tribes (Gomphreneae and Pseudoplantageae) does not reflect the phylogenetic relationship in this group. Three clades can be recognized.: [1]

This is the sister clade of the two other clades.

One large clade within this group, containing the genera Froelichia, Guilleminea, Blutaparon, some Gomphrena species, and probably Gossypianthus and Lithophila, has acquired the C4 carbon fixation pathway. [3] [4] Some of these C4 species occur at unusually high altitudes in the Andes, in cooler conditions than their C3 relatives. [5] 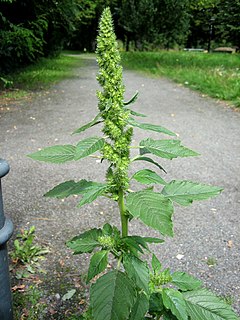 Amaranthaceae is a family of flowering plants commonly known as the amaranth family, in reference to its type genus Amaranthus. It includes the former goosefoot family Chenopodiaceae and contains about 165 genera and 2,040 species, making it the most species-rich lineage within its parent order, Caryophyllales. 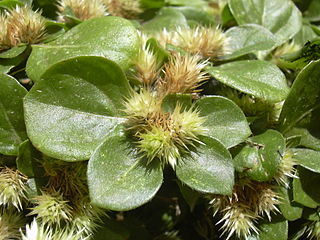 Alternanthera is a genus of flowering plants in the family Amaranthaceae. It is a widespread genus with most species occurring in the tropical Americas, and others in Asia, Africa, and Australia. Plants of the genus may be known generally as joyweeds, or Joseph's coat. Several species are notorious noxious weeds.

The Salicornioideae are a subfamily of the flowering plant family Amaranthaceae. Important characters are succulent, often articulated stems, strongly reduced leaves, and flowers aggregated in thick, dense spike-shaped thyrses. These halophytic plants are distributed worldwide. Many are edible 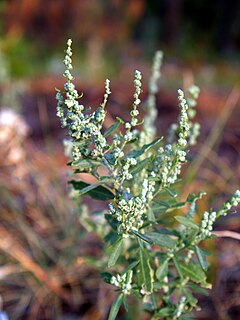 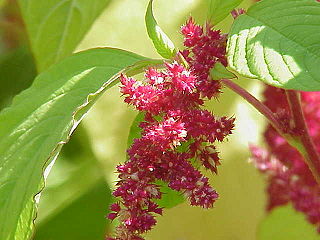 The Amaranthoideae are a subfamily of the Amaranthaceae. The stamens have anthers with two lobes (locules) and four pollen sacs. The main distribution of the subfamily is in tropical America, in tropical and Southern Africa, and in Australia.

The genus of the myrrhs, Commiphora, is the most species-rich genus of flowering plants in the frankincense and myrrh family, Burseraceae. The genus contains approximately 190 species of shrubs and trees, which are distributed throughout the (sub-) tropical regions of Africa, the western Indian Ocean islands, the Arabian Peninsula, India, and South America. The genus is drought-tolerant and common throughout the xerophytic scrub, seasonally dry tropical forests, and woodlands of these regions.

Iresine is a genus of flowering plants in the family Amaranthaceae. It contains 20 to 25 species, all of which are native to the American tropics. The generic name is derived from the Greek word εριος (erios), meaning "wooly", referring to the trichome-covered flowers. Bloodleaf is a common name for those species that have colored foliage, and these are often cultivated as ornamental plants. Some species are additives to versions of the hallucinogenic drink ayahuasca. 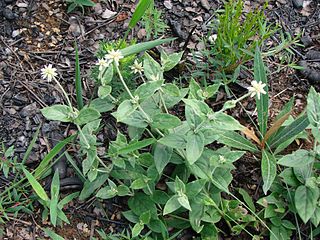 Pfaffia is a genus of plants in the family Amaranthaceae.

Aerva is a genus of plants in the family Amaranthaceae. Its species are native to the palaeotropics, throughout continental Africa, Madagascar and smaller islands, through parts of the Middle East, India, and southeast Asia. Aerva javanica is an alien in northern Australia. 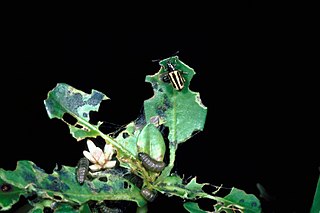 Agasicles hygrophila is a species of leaf beetle known by the common name alligator weed flea beetle. It has been used successfully as an agent of biological pest control against the noxious aquatic plant known as alligator weed.

Ptilotus R.Br. is a genus of approximately 120 species of annual and perennial herbs and shrubs in the family Amaranthaceae. All species are native to mainland Australia, although one species, Ptilotus spathulatus (R.Br.) Poir., also occurs in Tasmania and another, Ptilotus conicus R.Br., in Malesia on the islands of Flores and Timor. Most of the diversity is in Western Australia, particularly in the Pilbara. Common names for species in this genus include mulla mulla, foxtails, pussy tails and lamb's tails. The genus was first formally described by botanist Robert Brown in Prodromus Florae Novae Hollandiae in 1810. In family-level phylogenetic studies, Ptilotus has been placed within a clade informally known as the 'aervoids'. It has been resolved as monophyletic and is closely related to Aerva Forssk. An interactive key to the species of Ptilotus is available at KeyBase.

The Betoideae are a small subfamily of the flowering plant amaranth family, Amaranthaceae sensu lato. Commonly known members include beet, sugar beet, chard, and mangelwurzel, which all are cultivars of Beta vulgaris. 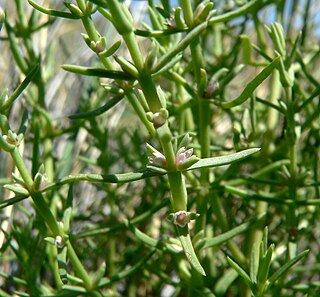 The Polycnemoideae are a small subfamily of plants in the family Amaranthaceae, representing a basal evolutionary lineage. The few relictual species are distributed in Eurasia and North Africa, North America, and Australia. 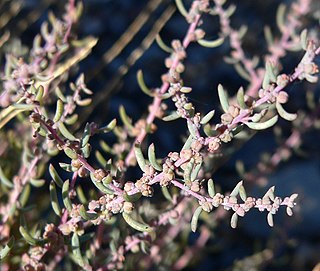 The Suaedoideae are a subfamily of plants in the family Amaranthaceae.

Blitum is a genus of flowering plants in the amaranth family Amaranthaceae, subfamily Chenopodioideae. It is closely related to genus Spinacia. Its 12 species were traditionally placed in the genera Chenopodium, Monolepis, or Scleroblitum. The species of genus Blitum occur in Asia, Europe, North Africa, the Americas, and Australia.

Pedersenia is a genus of flowering plants belonging to the family Amaranthaceae.

Wikispecies has information related to Gomphrenoideae .
This page is based on this Wikipedia article
Text is available under the CC BY-SA 4.0 license; additional terms may apply.
Images, videos and audio are available under their respective licenses.