Tidestromia is a genus with about six or seven species of annual or subshrub perennial plants native to desert and semi-arid regions of the western United States, Mexico and tropical America in the family Amaranthaceae. A common name of some species is honeysweet. [1] The stems are reddish and contrast conspicuously with the silvery leaves. This genus is named for the botanist Ivar Tidestrom. [2] [3]

Amaranthaceae is a family of flowering plants commonly known as the amaranth family, in reference to its type genus Amaranthus. It includes the former goosefoot family Chenopodiaceae and contains about 165 genera and 2,040 species, making it the most species-rich lineage within its parent order, Caryophyllales. 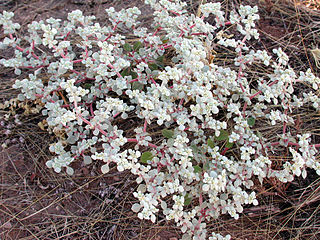 Tidestromia lanuginosa is a species of flowering plant in the amaranth family known by the common name woolly tidestromia.

Tidestromia suffruticosa, the shrubby honeysweet, is a perennial plant in the pigweed family (Amaranthaceae) of the southwestern United States deserts. It has one of the highest rates of photosynthesis ever recorded. 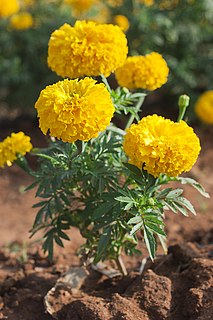 Tagetes is a genus of annual or perennial, mostly herbaceous plants in the sunflower family (Asteraceae). It was described as a genus by Linnaeus in 1753.

Ungnadia is a genus of flowering plants in the family Sapindaceae containing one species, Ungnadia speciosa, the Mexican buckeye, a shrub or small tree native to northern Mexico as well as Texas and southern New Mexico in the United States. The name honours David Baron von Ungnad, who first brought the horse chestnut to Vienna. 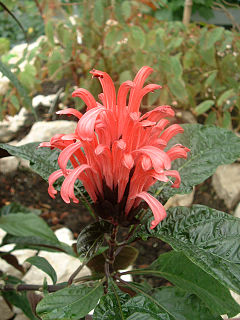 Justicia is a genus of flowering plants in the Acanthaceae family. It is the largest genus within the family, encompassing around 700 species with hundreds more as yet unresolved. They are native to tropical to warm temperate regions of the Americas, India and Africa. The genus serves as host to many butterfly species, such as Anartia fatima. Common names include water-willow and shrimp plant, the latter from the inflorescences, which resemble a shrimp in some species. The generic name honours Scottish horticulturist James Justice (1698–1763). They are closely related to Pachystachys.

Parkinsonia, also Cercidium, is a genus of flowering plants in the pea family, Fabaceae. It contains about 12 species that are native to semi-desert regions of Africa and the Americas. The name of the genus honors English apothecary and botanist John Parkinson (1567–1650).

Agave lechuguilla is an Agave species found only in the Chihuahuan Desert, where it is an indicator species. It typically grows on calcareous soils. The plant flowers once in its life, then it dies. The flowers are a source of nutrients for insects, bats, and some birds. 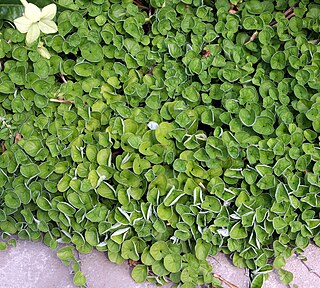 Dichondra is a small genus of flowering plants in the morning glory family, Convolvulaceae. They are prostrate, perennial, herbaceous plants, with creeping stems which take root readily at the leaf nodes. The flowers are white, greenish or yellowish, 2–3 mm diameter.

Holodiscus is a genus of flowering plants in the family Rosaceae, native to the Americas, from southwestern British Columbia, Canada and the western United States south to Bolivia. 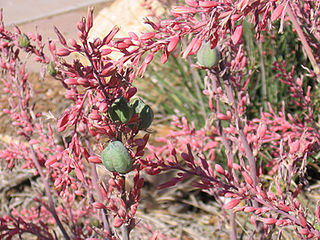 Hesperaloe is a genus of flowering plants in the family Asparagaceae, subfamily Agavoideae. It contains perennial yucca-like plants with long, narrow leaves produced in a basal rosette and flowers borne on long panicles or racemes. The species are native to the arid parts of Texas in the United States and Mexico and are sometimes cultivated as xerophytic ornamental plants.

Isocoma commonly called Jimmyweed or goldenweed, is a genus of North American semi-woody shrubs in the sunflower family. It is found in the semi-arid areas of Southwestern United States and Mexico.

Iva is a genus of wind-pollinated plants in the daisy family, described as a genus by Linnaeus in 1753. Plants of this genus are known generally as marsh elders. The genus is native to North America. 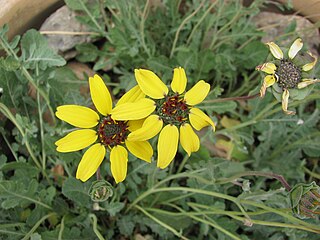 Berlandiera is a genus of flowering plants in the aster family, Asteraceae.

Machaeranthera is a genus of North American flowering plants in the daisy family which are known by the common name tansyaster.

Bebbia, common name sweetbush, is a genus of aromatic shrubs in the daisy family. 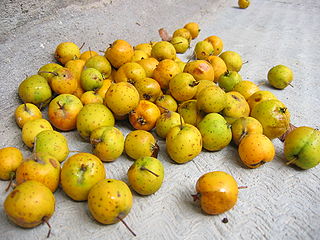 Crataegus mexicana is a species of hawthorn known by the common names tejocote, manzanita, tejocotera and Mexican hawthorn. It is native to the mountains of Mexico and parts of Guatemala, and has been introduced in the Andes. The fruit of this species is one of the most useful among hawthorns. 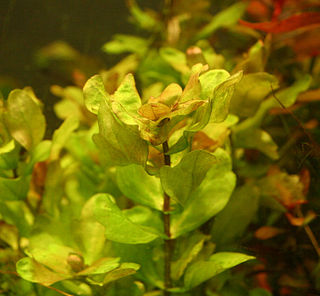 Shinnersia is an aquatic plant native to Texas and Mexico. It belongs to the boneset tribe within the sunflower family.

Tamaulipa is a genus of flowering plants in the boneset tribe within the sunflower family.

Ribes leptanthum is a spiny-stemmed, small-leaved species of gooseberry in the genus Ribes commonly called trumpet gooseberry. It is native to Arizona, Colorado, New Mexico, Texas, and Utah, where it is usually found in high-altitude canyons.