Government revenue or National revenue is money received by a government from taxes and non-tax sources to enable it to undertake government expenditures.

Government revenue is derived from:

The Minister of National Revenue is the minister of the Crown in the Canadian Cabinet who is responsible for the Canada Revenue Agency. [1] 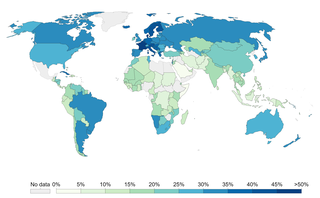 A tax is a compulsory financial charge or some other type of levy imposed on a taxpayer by a governmental organization in order to fund government spending and various public expenditures. A failure to pay, along with evasion of or resistance to taxation, is punishable by law. Taxes consist of direct or indirect taxes and may be paid in money or as its labour equivalent. The first known taxation took place in Ancient Egypt around 3000–2800 BC.

In accounting, revenue is the income or increase in net assets that an entity has from its normal activities. Commercial revenue may also be referred to as sales or as turnover. Some companies receive revenue from interest, royalties, or other fees. "Revenue" may refer to income in general, or it may refer to the amount, in a monetary unit, earned during a period of time, as in "Last year, Company X had revenue of $42 million". Profits or net income generally imply total revenue minus total expenses in a given period. In accounting, in the balance statement, revenue is a subsection of the Equity section and revenue increases equity, it is often referred to as the "top line" due to its position on the income statement at the very top. This is to be contrasted with the "bottom line" which denotes net income.

The goods and services tax is a value added tax introduced in Canada on January 1, 1991, by the government of Prime Minister Brian Mulroney. The GST replaced a previous hidden 13.5% manufacturers' sales tax (MST);

A taxpayer is a person or organization subject to pay a tax. Modern taxpayers may have an identification number, a reference number issued by a government to citizens or firms.

The Government of India, often abbreviated as GoI, and also referred to as the Centre, is the union government created by the constitution of India as the legislative, executive and judicial authority of the union of twenty eight states and eight union territories of a constitutionally democratic republic. The seat of the Government is located in New Delhi, the capital of India.

Taxation in Canada is a prerogative shared between the federal government and the various provincial and territorial legislatures.

Income taxes in Canada constitute the majority of the annual revenues of the Government of Canada, and of the governments of the Provinces of Canada. In the fiscal year ending 31 March 2018, the federal government collected just over three times more revenue from personal income taxes than it did from corporate income taxes.

A government budget is a document prepared by the government and/or other political entity presenting its anticipated tax revenues and proposed spending/expenditure for the coming financial year. In most parliamentary systems, the budget is presented to the lower house of the legislature and often requires approval of the legislature. Through this budget, the government implements economic policy and realizes its program priorities. Once the budget is approved, the use of funds from individual chapters is in the hands of government, ministries and other institutions. Revenues of the state budget consist mainly of taxes, customs duties, fees and other revenues. State budget expenditures cover the activities of the state, which are either given by law or the constitution. The budget in itself does not appropriate funds for government programs, which requires additional legislative measures.

This article refers to taxation in Afghanistan.

Fiscal policy are "measures employed by governments to stabilize the economy, specifically by manipulating the levels and allocations of taxes and government expenditures. Fiscal measures are frequently used in tandem with monetary policy to achieve certain goals." In the Philippines, this is characterized by continuous and increasing levels of debt and budget deficits, though there have been improvements in the last few years.

In the United Kingdom, the value-added tax was introduced in 1973, replacing Purchase Tax, and is the third-largest source of government revenue, after income tax and National Insurance. It is administered and collected by HM Revenue and Customs, primarily through the Value Added Tax Act 1994.

The Canadian federal budget for fiscal year 2013–2014 was presented to the House of Commons of Canada by Finance Minister Jim Flaherty on 21 March 2013. The budget bill was tabled in the legislature on 29 April 2013 as the Economic Action Plan 2013 Act, No. 1. A second budget bill will be tabled in the autumn, which will include elements excluded from the first bill, such as the Canada Job Grant. The deficit was projected to be $18.7 billion for the fiscal year 2013-2014, however this was adjusted to $8.1 billion by end of the fiscal year and once the Auditor General's recommendations on the Government's unfunded pension obligations were taken into account.

In Malaysia, federal budgets are presented annually by the Government of Malaysia to identify proposed government revenues and spending and forecast economic conditions for the upcoming year, and its fiscal policy for the forward years. The federal budget includes the government's estimates of revenue and spending and may outline new policy initiatives. Federal budgets are usually released in October, before the start of the fiscal year. All of the Malaysian states also present budgets. Since state finances are dependent on money from the federal government, these budgets are usually released after the federal one.

The Canadian federal budget for fiscal year 1989–1990 was presented to the House of Commons of Canada by finance minister Michael Wilson on 27 April 1989. It was the first budget after the 1988 Canadian federal election.

The Canadian federal budget for fiscal year 1990–1991 was presented to the House of Commons of Canada by finance minister Michael Wilson on 20 February 1990. It was the second budget after the 1988 Canadian federal election.