The livre was the currency of Haiti until 1813. The Haitian livre was a French colonial currency, distinguished by the use, in part, of Spanish coins. It was equal to the French livre and was subdivided into 20 sous, each of 12 deniers. The escalin of 15 sous was also used as a denomination, since it was equal to the Spanish colonial real. Coins specifically for use in Haiti were issued between 1802 and 1809, along with various overstamped coins.

Centime is French for "cent", and is used in English as the name of the fraction currency in several Francophone countries. 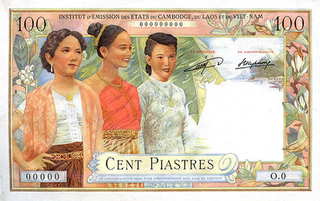 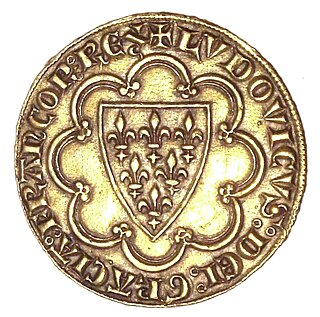 The term écu or crown may refer to one of several French coins. The first écu was a gold coin minted during the reign of Louis IX of France, in 1266. Écu means shield, and the coin was so called because its design included the coat of arms of France. The word is related to scudo and escudo. The value of the écu varied considerably over time, and silver coins were also introduced.

In 1820, in response to a request from the British colony of Mauritius, the imperial government in London struck silver coins in the denominations of ​1⁄4, ​1⁄8, and ​1⁄16 dollars. The dollar unit in question was equivalent to the Spanish dollar and these fractional coins were known as 'Anchor Dollars' because of the anchor that appeared on them. More of these anchor dollars were struck in 1822 and not only for Mauritius but also for the British West Indies. In addition to this, a ​1⁄2 dollar anchor coin was struck for Mauritius. A year or two later, copper dollar fractions were struck for Mauritius, the British West Indies, and Sierra Leone.

The livre was the currency of New France, the French colony in modern-day Canada. It was subdivided into 20 sols, each of 12 deniers. The New France livre was a French colonial currency, distinguished by the use of paper money.

Livre may refer to:

The history of currency in the British colony of Dominica closely follows that of the British Eastern Caribbean territories in general. Even though Queen Anne's proclamation of 1704 brought the gold standard to the West Indies, silver pieces of eight continued to form a major portion of the circulating currency right into the latter half of the nineteenth century.

The real was the currency of Santo Domingo until 1822. Some coins were struck locally which circulated alongside other Spanish colonial coins. The real was replaced by the Haitian gourde when Santo Domingo was taken over by Haïti.

The livre was the currency of various French colonies until the early 19th century. It was subdivided into 20 sous, each of 12 deniers. It was mostly issued in paper money form and was generally linked to the French livre at the rate of ​1 1⁄2 colonial livres = 1 French livre. Colonies where it was used include French Guiana, Guadeloupe, Saint-Domingue, Martinique, Mauritius, New France and Réunion.

The livre was the currency of Saint Lucia until 1814. The Saint Lucia livre was a French colonial currency, distinguished by the use of various cut Spanish and Spanish colonial coins. The livre was subdivided into 20 sous, each of 12 deniers. The escalin was worth 15 sous, with the stampee worth 3 sous 9 denier. Until 1813, 12 escalins were equal to 8 reales, after which 15 escalins equaled 8 reales. In 1851, sterling was introduced for circulation.

The livre was the currency of Guadeloupe until 1816. It was subdivided into 20 sous, each of 12 deniers, with the escalin worth 15 sous. The Guadeloupe livre was a French colonial currency, distinguished by the use, in part, of Spanish coins. 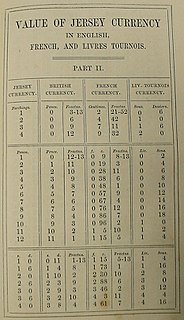 The livre was currency of Jersey until 1834. It consisted entirely of French coins.