Hansa Tonstudio is a recording studio located in the Kreuzberg district of Berlin, Germany. [1] The studio, famous for its Meistersaal recording hall, is situated approximately 150 metres from the former Berlin Wall, giving rise to its former nicknames of "Hansa Studio by the Wall" or "Hansa by the Wall". [2]

The Meistersaal has been fully restored and is now used for concerts and other events as well as recording. [3]

The studio was originally built in 1913 as a guildhall for the Berlin Builder’s Society and was later used as a cabaret and chamber music concert hall during the Weimar era. [1] [2] [3]

The Hansa Records label was founded in 1962 (one year after the building of the Berlin Wall) by brothers Peter and Thomas Meisel in the Wilmersdorf quarter of West Berlin. From 1965, they temporarily rented the Ariola production facilities in the Meistersaal location but also built their own Studio I on Nestorstrasse in the Halensee neighbourhood, which opened in 1973. Nevertheless, Hansa had to abandon its own production facilities the next year, and from 1974 again rented the Meistersaal location (Studio II) [3] on Köthener Strasse.

Meanwhile, the Meistersaal, noted for its outstanding acoustics, [3] was used not only for light music productions but also for classical music recordings. In the early and mid-1980s, all productions were overseen by English record producer Michael Blakey. The studios have played host to many well-known acts, including Tangerine Dream, David Bowie, [4] [5] Brian Eno, [6] Iggy Pop, [2] [7] U2, [2] [5] Nick Cave and the Bad Seeds, [2] [6] Claw Boys Claw, [8] Depeche Mode, [2] [9] Marillion, [9] Siouxsie and the Banshees, Killing Joke, Boney M. and most recently Manic Street Preachers, R.E.M., Snow Patrol, Kent, Living Things and Go Go Berlin. Bowie is said to have written Heroes in a window of the studio while watching his sound engineer kiss his backup singer, an image that made it into the song's lyrics. [3]

The number of notable recordings and the acoustic quality, especially that of the Meistersaal, have given the studio near legendary status, especially within the post-punk and synthpop genres.

In 2018, the studio was the subject of a documentary feature by filmmaker Mike Christie titled Hansa Studios: By The Wall 1976-90, which aired across Europe on Sky Arts and Sky Arte. 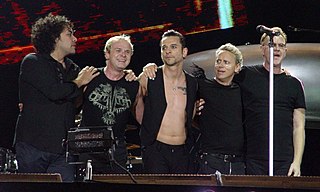 Depeche Mode are an English electronic music band formed in Basildon in 1980. The group consists of a trio of Dave Gahan, Martin Gore and Andy Fletcher (keyboards). 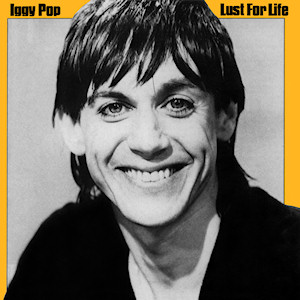 Lust for Life is the second solo studio album by American musician Iggy Pop, released on September 9, 1977, by RCA Records. It was his second collaboration with English musician and friend David Bowie after The Idiot, released in March the same year. Shortly after Bowie released his own album Low in January, Pop went on a tour to support The Idiot with Bowie as his keyboardist. At the tour's conclusion, Pop and Bowie regrouped in Berlin to record the former's next solo album.

Anton Johannes Gerrit Corbijn van Willenswaard is a Dutch photographer, film director and music video director. He is the creative director behind the visual output of Depeche Mode and U2, having handled the principal promotion and sleeve photography for both bands over three decades. Some of his works include music videos for Depeche Mode's "Enjoy the Silence" (1990), U2's "One" (1991), Bryan Adams' "Do I Have to Say the Words?", Nirvana's "Heart-Shaped Box" (1993) and Coldplay’s "Talk" (2005) and "Viva la Vida" (2008), as well as the Ian Curtis biographical film Control (2007), The American (2010), A Most Wanted Man (2014), based on John le Carré's 2008 novel of the same name and LIFE (2015), after the friendship between 'Life' magazine photographer Dennis Stock and James Dean.

Francis John Tovey, known also by his stage name Fad Gadget, was a British avant-garde electronic musician and vocalist. He was a proponent of both new wave and early industrial music, fusing together a unique blend of pop structured songs mixed with mechanised experimentation. 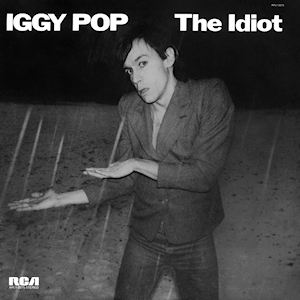 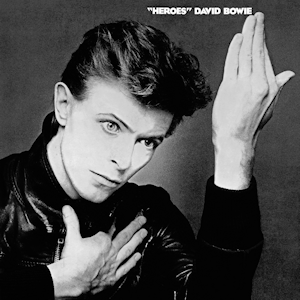 "Heroes" is the 12th studio album by English musician David Bowie, released on 14 October 1977 by RCA Records. After releasing Low earlier that year, Bowie toured as the keyboardist of his friend and singer Iggy Pop. At the conclusion of the tour, they recorded Pop's second solo album Lust for Life at Hansa Tonstudio in West Berlin before Bowie regrouped there with collaborator Brian Eno and producer Tony Visconti to record "Heroes". It was the second instalment of his Berlin Trilogy, following Low and preceding Lodger (1979). Of the three albums, it was the only one wholly recorded in Berlin. Much of the same personnel from Low returned for the sessions, augmented by King Crimson guitarist Robert Fripp. 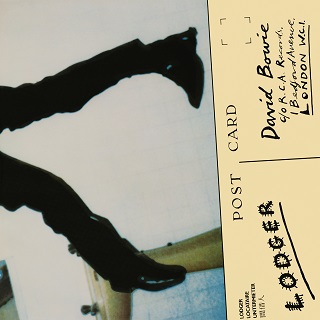 Lodger is the 13th studio album by English musician David Bowie, released on 25 May 1979 by RCA Records. After an eventful year that saw the release of two studio albums, Low and "Heroes", and many other side projects in 1977, Bowie embarked on the Isolar II world tour in 1978. During a break in the tour, Bowie regrouped with collaborator Brian Eno and producer Tony Visconti to record his next album. The final release of the Berlin Trilogy, the album was recorded mainly at Mountain Studios in Montreux, Switzerland, in September 1978. Most of the same personnel from prior releases returned, and future King Crimson guitarist Adrian Belew joined from the tour.

Hansa Records was a record label founded in the 1960s based in Berlin, Germany. 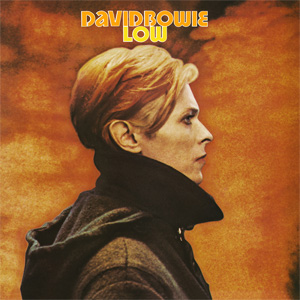 Low is the 11th studio album by English musician David Bowie, released on 14 January 1977 by RCA Records. After years of drug addiction when living in Los Angeles, Bowie moved to France in 1976 with his friend Iggy Pop to sober up. There, Bowie produced and co-wrote Pop's debut studio album, The Idiot, featuring sounds Bowie would explore on his next record. After completing The Idiot, Bowie began recording the first of three collaborations that became known as the Berlin Trilogy with American producer Tony Visconti and English musician Brian Eno. Sessions began at Hérouville's Château d'Hérouville in September 1976 and ended in October at Hansa Studios in West Berlin, where Bowie and Pop had relocated. 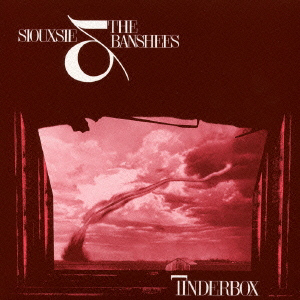 Tinderbox is the seventh studio album by English rock band Siouxsie and the Banshees. It was released on 21 April 1986 by Wonderland and Polydor Records in the United Kingdom and by Geffen Records in the United States. It was the band's first full-length effort recorded with then-new guitarist John Valentine Carruthers; Carruthers had previously only added a few parts on the 1984 EP The Thorn. The first recording sessions for the album took place at Hansa by the Wall in Berlin in May 1985. 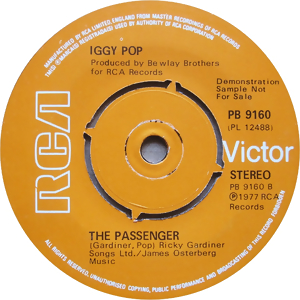 "The Passenger" is a song written by Iggy Pop and Ricky Gardiner, recorded and released by Iggy Pop on the Lust for Life album in 1977. It was also released as the B-side of the album's only single, "Success". It was released as a single in its own right in March 1998, reaching number 22 in the UK charts.

Gareth Jones is an English music producer and engineer notable for working with Depeche Mode, Einstürzende Neubauten, Wire and Erasure. 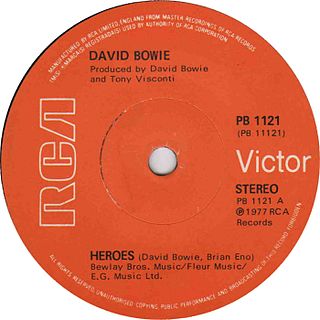 "'Heroes'" is a song by English singer-songwriter David Bowie. It was co-written by Bowie and Brian Eno, produced by Bowie and Tony Visconti, and recorded in July and August 1977 at Hansa Studio by the Wall. It was released on 23 September 1977 as the lead single from his 12th studio album of the same name, backed with the song "V-2 Schneider". A product of Bowie's "Berlin" period, the track was not a huge hit in the United Kingdom or the United States after its release, but it has since become one of his signature songs. In January 2016, following Bowie's death, the song reached a new peak of number 12 in the UK Singles Chart. "'Heroes'" has been cited as Bowie's second-most covered song after "Rebel Rebel".

The Berlin Trilogy consists of three consecutively released studio albums by English musician David Bowie: Low, "Heroes" and Lodger (1979). The trilogy originated following Bowie's move from Los Angeles, California, to Europe to rid himself of worsening drug addiction. Influences included krautrock, the German music genre, and the recent ambient releases of English musician Brian Eno. After cancelling a proposed soundtrack album for The Man Who Fell to Earth, Bowie embarked on the Isolar tour and then moved to Europe. Before work began on the trilogy, Bowie co-wrote and produced Iggy Pop's debut solo album The Idiot, which features a sound similar to what Bowie would explore in the trilogy. He also collaborated with Pop for his second solo album Lust for Life before recording "Heroes". Both albums were released in 1977.

"Nightclubbing" is a song written by David Bowie and Iggy Pop, first released by Iggy Pop on his debut solo studio album, The Idiot in 1977. It has been since considered "a career highlight", along with "Lust for Life" and has been covered by many artists. It is also extensively featured on other media. 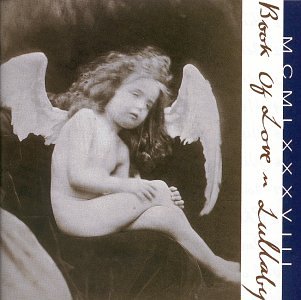 Lullaby is the second studio album by American synth-pop band Book of Love, released on June 21, 1988, by Sire Records. 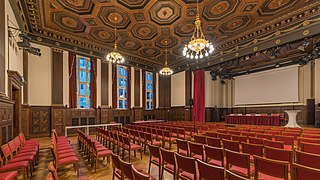 The Meistersaal is a historic concert hall in Berlin, Germany. Built in 1910 as a chamber music concert hall, the building today enjoys protected building status. It is located in Berlin-Mitte near Potsdamer Platz. Its major claim to fame stems from the times when it was Studio 2 of Hansa Tonstudio. Since the 1990s, the Meistersaal has found use as a location for all manner of events. 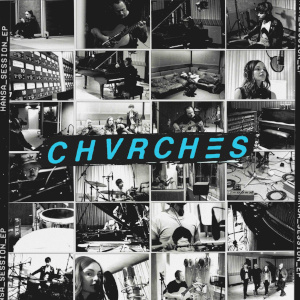 Hansa Session is the acoustic and string quartet version of five re-imagined tracks from the Love Is Dead album by Scottish synth-pop band Chvrches recorded at the Hansa Tonstudio in Berlin.