Stapleton was educated at Lancing College and Pembroke College, Cambridge and ordained in 1956. He held curacies at St Olave with St Giles, York and All Saints' Pocklington. He was Vicar of Seaton Ross then Rector of Skelton. From 1975 to 1981 he was Vicar of Wroxham and then a canon residentiary at Rochester Cathedral [4] until his appointment as Dean of Carlisle. [5] 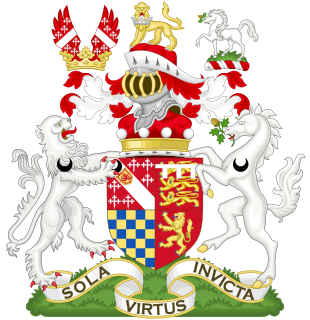 Baron Howard of Glossop, in the County of Derby, is a title in the Peerage of the United Kingdom, since 1975 a subsidiary title of the dukedom of Norfolk. It was created in 1869 for the Liberal politician Lord Edward Howard, the second son of Henry Fitzalan-Howard, 13th Duke of Norfolk. His grandson, the third Baron, married Mona Stapleton, 11th Baroness Beaumont. Their eldest son, Miles, succeeded his mother in the barony of Beaumont in 1971 and his father in the barony of Howard of Glossop in 1972. In 1975 he also succeeded in the dukedom of Norfolk on the death of his cousin, Bernard Fitzalan-Howard, 16th Duke of Norfolk. The two baronies are now subsidiary titles of the dukedom of Norfolk. See this title for further history of the peerages.

The Rt Rev Edward Barry Henderson DSC was Bishop of Bath and Wells from 1960 to 1975.

Peter Wheatley is a retired bishop in the Church of England, currently serving as Priest-in-Charge of Christ Church, St Leonards-on-Sea. From 1995 to 1999, he was the Archdeacon of Hampstead. From 1999 to 2014, he was the Bishop of Edmonton, an area bishop in the Diocese of London.

David James Smith is a retired Anglican bishop of the Church of England.

Ian Harland was a Church of England cleric, serving as Anglican Bishop of Lancaster then Bishop of Carlisle. 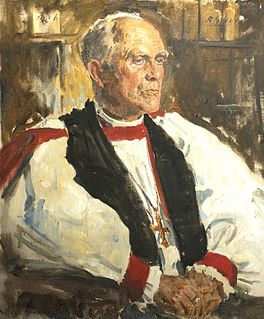 Henry Herbert Williams CH was born into an ecclesiastical family on 19 December 1872 and educated at St Peter's School, York and The Queen's College, Oxford. He began his ministry in 1900 as a tutor and lecturer in philosophy at Hertford College, Oxford and in 1913 he became Principal of St Edmund Hall, Oxford. From 1920 to 1941 he was Bishop of Carlisle. He died on 29 September 1961.

Peter Haynes was an Anglican priest in the late 20th century.