Colonel Sir John Edmond Hugh Boustead KBE CMG DSO MC & Bar (14 April 1895 – 3 April 1980) was a British military officer, modern pentathlete, and diplomat who served in numerous posts across several Middle Eastern countries, including ambassador to Abu Dhabi from 1961 to 1965. The son of a tea planter from Sri Lanka, Boustead began his career with the Royal Navy, but soon joined the British Army to fight in the trenches during World War I, where he earned his first of two Military Crosses. Following an appearance at the 1920 Summer Olympics, Boustead spent several years as a mountaineer and explorer prior to being appointed commander of the Sudan Camel Corps, with whom he served through World War II. He then embarked on a diplomatic career until his 1965 retirement and published an autobiography, The Wind of Morning, in 1971, nine years prior to his death in Dubai.

Boustead was born on 14 April 1895 in Nuwara Eliya, Sri Lanka, the son of a local tea planter who later became a director of The Imperial Ethiopian Rubber Company. [1] He was educated at the Cheam School and attended Britannia Royal Naval College (then Royal Naval College, Dartmouth) prior to the onset of World War I, [2] where he began the conflict as a midshipman in the Royal Navy, having attained that rank on 15 January 1913. On 15 May 1915 he was promoted to acting Sub-Lieutenant, [3] but deserted this post one month later while on leave in Simon's Town [4] to engage in trench warfare as a member of the Transvaal Scottish Regiment from South Africa. [5] He earned a Military Cross at the Battle of Arras, which was gazetted on 26 July 1917 with the citation: [6]

For conspicuous gallantry and devotion to duty. As intelligence and sniping officer he showed great skill and initiative in posting

the snipers. His fine leadership and good disposition largely contributed to the success of the operation.

For conspicuous gallantry at Kardel, on the 25th August, 1919, when by the skilful manner in which he personally handed Lewis guns he assisted in beating off several hostile cavalry attacks, and by his example greatly inspired the Lewis-gun sections of the Russian regiment to which he was attached.

At this time he was officially an "Instr[uctor], Physical Training" with the infantry. [15] His gallantry eventually led to the pardoning of his earlier desertion. [5]

A boxing champion in the lightweight division during his service with the British army, [7] Boustead was recruited to captain the British team in the modern pentathlon at the 1920 Summer Olympics. [16] He finished joint 14th in a field of 23 competitors in his only Olympic appearance. [5] He then continued his military career and, after transferring to the Gordon Highlanders, he was seconded from them to serve in Sudan beginning 19 November 1924. [17] A seasoned explorer, he participated in both the 1926 British expedition to Kangchenjunga and the 1933 expedition to Mount Everest, [5] [13] organized his own mountaineering expedition in Sikkim, [18] explored the Libyan desert with Ralph Alger Bagnold in 1932, [19] and traversed the wastes of Greenland. [5]

Boustead rejoined the military following the onset of World War II to raise, train, and command the Sudanese Frontier Force. [2] As a local Lieutenant-Colonel [30] and commander of its Camel Corps he led some of the units that helped restore Emperor Haile Selassie I to the throne of Ethiopia in 1941. For his actions in this conflict, he was recommended for the Distinguished Service Order by Orde Wingate on 15 August 1941, [31] which he received on 30 December 1941, being Mentioned in Despatches on the same date. [30] His World War II service officially ended on 7 December 1946 and the honorary rank of Colonel was bestowned upon him. [32]

After the conflict Boustead served as a diplomat in several Middle Eastern countries including Sudan, Yemen, and Oman, prior to spending nine years (1949–1958) as a Resident Adviser in the Aden Protectorate. His next post was the then-Sultanate of Muscat and Oman, where he held the position of Development Secretary. [2] He was appointed political agent (then equivalent to ambassador) of Abu Dhabi in 1961, a post that he held until 1965. [13] He was promoted Knight Commander of the Order of the British Empire in the New Year Honours that year, [33] and presented with the Lawrence of Arabia Memorial Medal of the Royal Society for Asian Affairs. [34]

Following his 1965 retirement Boustead went on a lecture tour in the United States, [2] and eventually settled down in Mezyad in the U.A.E., where he was asked by Sheikh Zayed bin Sultan Al Nahyan to oversee his stable of horses in Al Ain. In 1971 he published his autobiography, The Wind of Morning, which was well received. [13] In addition to his knighthood, DSO, and receiving the Military Cross and Bar, he was appointed Companion of the Order of St Michael and St George in the 1954 Queen's Birthday Honours and awarded the St George's Military Medal with 1 Palm by Haile Selassie. [35] [36] He died on 3 April 1980 in Dubai at the age of 84, [13] [37] having never married. [2] At Boustead's death, British MP Richard Luce claimed that no one had a greater impact in "cement[ing] relations between the British and the Arabs" as Boustead. [38]

Field Marshal Sir Archibald Armar Montgomery-Massingberd,, known as Archibald Armar Montgomery until October 1926, was a senior British Army officer who served as Chief of the Imperial General Staff (CIGS) from 1933 to 1936. He served in the Second Boer War and in the First World War, and later was the driving force behind the formation of a permanent "Mobile Division", the fore-runner of the 1st Armoured Division.

General Sir Francis Reginald Wingate, 1st Baronet, was a British general and administrator in Egypt and the Sudan. He earned the nom de guerre Wingate of the Sudan.

Major General Walter Adams Coxen was a senior Australian Army officer in the First World War. In April 1930 Coxen was promoted to the position of Chief of the General Staff. He retired in 1931. 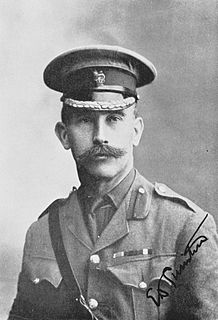 Major-General Sir Ernest Dunlop Swinton, was a British Army officer who played a part in the development and adoption of the tank during the First World War. He was also a war correspondent and author of several short stories on military themes. He is credited, along with fellow officer Lieutenant-Colonel Walter Dally Jones, with having initiated the use of the word "tank" as a code-name for the first tracked, armoured fighting vehicles.

General Sir William Platt was a senior officer of the British Army during both World War I and World War II.

Major-General Gerald Russell Smallwood was a senior officer in the British Army who served during both World War I and World War II.

General Sir William Eliot Peyton, was a British Army officer who served as Military Secretary to the British Expeditionary Force from 1916 to 1918. He was also Delhi Herald of Arms Extraordinary at the time of the Delhi Durbar of 1911.

General Sir James Willcocks, was a British Army officer who spent most of his career in India and Africa and held high command during the First World War.

General Sir Harry Hugh Sidney Knox is a former Adjutant-General to the Forces.

Major General Douglas Lyall Darling & Bar, MC & Bar was a British Army officer who was highly decorated for gallantry and leadership during the Second World War.

Major-General The Honourable Sir Frederick Gordon, was a senior British Army officer, who additionally served as a major general in the early Royal Air Force.

Lionel Peter Collins CB, CSI, DSO, OBE was an English cricketer and British Indian Army officer. Collins played minor counties cricket for Berkshire and after attending Keble College, Oxford first-class cricket for Oxford University Cricket Club. He joined the British Army after university and in 1901 was seconded to the Indian Staff Corps, serving with the Gurkha Brigade of the British Indian Army. He was in England and North America in 1907 playing for the Marylebone Cricket Club and later appeared for the Army and Navy and Free Foresters cricket teams. Collins served with the Gurkhas on the Western Front of the First World War and received the Distinguished Service Order in 1915 for actions during the Battle of Neuve Chapelle. He later returned to British India and was mentioned in dispatches for service in Baluchistan. Collins was with British forces during the Third Anglo-Afghan War of 1919 and was appointed an Officer of the Order of the British Empire for his actions. From 1932 to 1936 he was a brigadier and commandant of the Indian Military College at Dehra Dun.

Brigadier Arthur Christopher Lancelot Stanley-Clarke was an English first-class cricketer and British Army officer. After attending Winchester College and the University of Oxford, Stanley-Clarke enlisted with the Cameronians in August 1909. In a military career which lasted until 1944, he fought in both the First World War and the Second World War. He was highly decorated, being awarded the Distinguished Service Order, Legion d'Honneur, Croix de Guerre and the Order of Polonia Restituta. He also played first-class cricket for the British Army cricket team.