Sir Hugh Maxwell Casson CH KCVO PRA RDI (23 May 1910, Hampstead, London [1] – 15 August 1999, Chelsea, London [2] ) was a British architect, interior designer, artist, and writer and broadcaster on 20th-century design. He was the director of architecture at the 1951 Festival of Britain on London's South Bank.

Casson was the nephew of actor, Sir Lewis Casson. Casson studied at Eastbourne College in East Sussex, then St John's College, Cambridge (1929–31), after which he spent time at the Bartlett School of Architecture in London.

Before the Second World War, he divided his time between teaching at the Cambridge School of Architecture and working in the London office of his Cambridge tutor, architect Christopher (Kit) Nicholson. He wrote the book New Sights of London in 1938 for London Transport, championing modern architecture within reach of London, while remaining critical of the UK's track record in innovative building. [3] "He does not mince his words," commented the Architect and Building News on the cover.During the war, he worked in the Camouflage Service of the Air Ministry. [4]

Casson was appointed to his role as director of architecture of the Festival of Britain in 1948 at the age of 38, [5] and set out to celebrate peace and modernity through the appointment of other young architects. For example, the Modernist design of the Royal Festival Hall was led by a 39-year-old, Leslie Martin. Casson's Festival achievements led to his being made a (Knight Bachelor) in 1952.

After the war, and alongside his Festival work, Casson went into partnership with young architect Neville Conder. Their projects included corporate headquarters buildings, university campuses, the Elephant House at London Zoo, a building for the Royal College of Art (where Casson was Professor of Interior Design from 1955 to 1975, and later served as Provost), the Microbiology Building (Belfast), and the master planning and design of the Sidgwick Avenue arts faculty buildings for the University of Cambridge, including the Austin Robinson Building which houses the Faculty of Economics as well as the Marshall Library of Economics. This latter project lasted some 30 years.

A close friend of the British royal family, Casson designed the interior of the royal yacht Britannia and is also credited with having taught Charles, Prince of Wales to paint in watercolours. He was elected to the Royal Academy in 1970, and was its President from 1976 to 1984. In 1978, he was elected to the National Academy of Design as an Honorary Corresponding member, and later that year became a Knight Commander of the Royal Victorian Order (KCVO).

In the 1980s Casson became a television presenter, with his own series, Personal Pleasures with Sir Hugh Casson, about stately homes and places he enjoyed.

Casson supplied watercolour illustrations for a new edition of Sir John Betjeman's verse autobiography Summoned by Bells (1960); The Illustrated "Summoned by Bells" was published by John Murray in 1989. [6]

He was made a Knight Bachelor in the 1952 New Year Honours, becoming Sir Hugh Casson. [7]

In the 1985 New Years Honours List, Casson was appointed to the Order of the Companions of Honour. [9]

The Victoria & Albert Museum houses Casson's archives, and materials can be consulted at Blythe House, 23 Blythe Road, by appointment.

The Royal Academy awards "The Hugh Casson Drawing Prize" annually "for an original work on paper in any medium, where the emphasis is clearly on drawing". [10]

Casson is commemorated by Private Eye ′s Sir Hugh Casson Award, recognising the "Worst New Building of the Year" in the Nooks and Corners column.

National Life Stories conducted an oral history interview (C467/82) with Hugh Casson in 1991 for its Architects Lives' collection held by the British Library. [11]

Sir Thomas Penberthy Bennett KBE FRIBA was a renowned English architect, responsible for much of the development of the new towns of Crawley and Stevenage.

John Bradshaw Gass was an English architect and artist.

John Alfred Gotch was a noted English architect and architectural historian. His brother was the Pre-Raphaelite painter and illustrator Thomas Cooper Gotch, who painted his portrait. 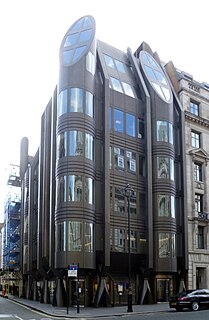 Rodney H Gordon was an English architect. He was the primary architect of the Tricorn Centre, Portsmouth, and Trinity Square, Gateshead. Architecturally, his works were primarily in concrete; he was said to be a Brutalist and his buildings have been described as "dramatic, sculptural and enormous" as well as "futuristic".

Frank Ernest Howard was an English architect who worked exclusively in the area of ecclesiastical furnishings and fittings. 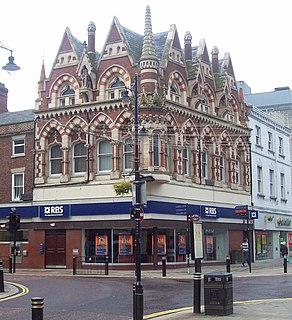 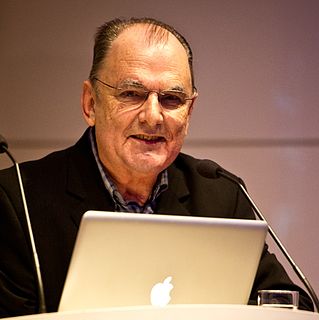 Bryan Robert Avery MBE RIBA was an English architect, born in Wallingford, Berkshire. After his childhood years spent in Lymington in the New Forest, Hampshire, he studied architecture at Leicester College of Art, followed by an MA in the History and Theory of Architecture at Essex University under Professors Joseph Rykwert and Dalibor Vesely.

Patricia Ann Hopkins, Lady Hopkins is an English architect and joint winner, along with her husband Sir Michael Hopkins, of the 1994 Royal Gold Medal for Architecture. 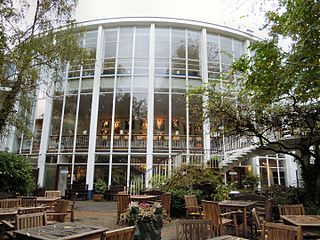 Maurice Bingham Adams FRIBA (1849–1933) was a British architect in the Arts and Crafts style.