There are a number of known causes of myopathy, and it is only once these have been ruled out that a clinician will assign an idiopathic inflammatory myopathy (IIM) syndrome to a case. The usual criteria for a diagnosis of PM are weakness in muscles of the head, neck, trunk, upper arms or upper legs; raised blood serum concentrations of some muscle enzymes such as creatine kinase; unhealthy muscle changes on electromyography; and biopsy findings of (i) muscle cell degeneration and regeneration and (ii) chronic inflammatory infiltrates in muscle cells. If heliotrope (purple) rash or Gottron's papules are also present, then the diagnosis is DM. In DM, myositis may not be clinically apparent but detectable via biopsy or MRI. [1] If the criteria for PM are met but muscle weakness also affects the hands and feet or is not accompanied by pain IBM should be suspected, and confirmed when muscle cell biopsy reveals (i) cytoplasmic vacuoles fringed by basophilic granules and (ii) inflammatory infiltrate comprising mostly CD8 T lymphocytes and macrophages; and electron microscopy reveals filamentous inclusions in both cytoplasm and nucleus. [2]

There have been few randomized treatment trials, due to the relative rarity of inflammatory myopathies. [3] The goal of treatment is improvement in activities of daily living and muscle strength. Suppression of immune system activity (immunosuppression) is the treatment strategy. Patients with PM or DM almost always improve to some degree in response to treatment, at least initially, and many recover fully with maintenance therapy. (If there is no initial improvement from treatment of PM or DM, the diagnosis should be carefully re-examined.) There is no proven effective therapy for IBM, and most IBM patients will need assistive devices such as a cane, a walking frame or a wheelchair. The later in life IBM arises, the more aggressive it appears to be. [4]

In severe cases of PM and DM with systemic signs, an initial three to five days on intravenous corticosteroid (methylprednisolone) may be used; but normally treatment begins with a single daily (after breakfast) high dose of oral corticosteroid (prednisone). After a month or so the strength of every second day's dose is very gradually reduced over three to four months, to minimize the negative effects of the prednisone. When a high dose of prednisone cannot be reduced without losing muscle strength, or when prednisone is effective but it is producing significant complications, "steroid sparing" oral immunosuppressants such as azathioprine, mycophenolate mofetil, methotrexate and cyclosporine, may be used in combination with reduced prednisone. Some of these steroid sparing drugs can take several months to demonstrate an effect. [4]

To minimize side effects, patients on corticosteroids should follow a strict high-protein, low-carbohydrate, low-salt diet; and with long-term corticosteroid use a daily calcium supplement and weekly vitamin D supplement (and a weekly dose of Fosamax for postmenopausal women) should be considered. [4]

For patients not responding to this approach there is weak evidence supporting the use of intravenous immunoglobulin, ciclosporin, tacrolimus, mycophenolate mofetil and other agents; and trials of rituximab have indicated a potential therapeutic effect. [3]

Despite its very similar clinical presentation to PM, IBM does not respond to the drugs that effectively treat PM, and there is no proven effective therapy for IBM. [4] Alemtuzumab is being studied but as of May 2013 it had not demonstrated clinical effectiveness in IBM. [3] Dysphagia (difficulty swallowing) may be improved by intravenous immunoglobulin, though more trials are needed. [5] Non-fatiguing, systematic strength-building exercise has demonstrated benefit. [6] Occupational and rehabilitation therapists can offer good advice on walking without falling and performing fine motor tasks, and can provide appropriate canes, braces and wheelchairs. Speech pathologists can provide advice on preventing choking episodes and reducing the anxiety of an immanent aspiration for both patients and carers. [4]

Every year between 2.18 and 7.7 people per million receive a diagnosis of PM or DM. [7] Around 3.2 children per million per year are diagnosed with DM (termed juvenile dermatomyositis), with an average age of onset of seven years. Diagnosis of adult DM commonly occurs between 30 and 50 years of age. PM is an adult disease, usually emerging after the age of twenty. PM and DM are more common in females, more common in Caucasians, and least common in Asians. At any given time, about 35.5 people per million have IBM; it emerges after the age of 30 (usually after 50), and may be more common in males. [3]

Inclusion body myositis (IBM) is the most common inflammatory muscle disease in older adults. The disease is characterized by slowly progressive weakness and wasting of both proximal muscles and distal muscles, most apparent in the finger flexors and knee extensors. IBM is often confused with an entirely different class of diseases, called hereditary inclusion body myopathies (hIBM). The "M" in hIBM is an abbreviation for "myopathy" while the "M" in IBM is an abbreviation for "myositis". These diseases should not be confused with each other. In IBM, two processes appear to occur in the muscles in parallel, one autoimmune and the other degenerative. Inflammation is evident from the invasion of muscle fibers by immune cells. Degeneration is characterized by the appearance of holes, deposits of abnormal proteins, and filamentous inclusions in the muscle fibers. sIBM is a rare disease, with a prevalence ranging from 1 to 71 individuals per million.

Myalgia comes with many diseases. The most common cause of acute myalgia is the overuse of a muscle or group of muscles; another likely cause is viral infection, especially when there has been no trauma. Long-lasting myalgia can be caused by metabolic myopathy, some nutritional deficiencies, and chronic fatigue syndrome. 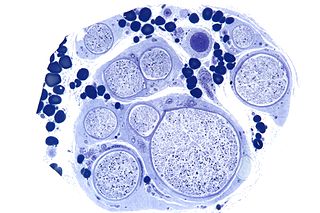 Juvenile dermatomyositis (JDM) is an idiopathic inflammatory myopathy (IMM) of presumed autoimmune dysfunction resulting in muscle weakness among other complications. It manifests itself in children; it is the pediatric counterpart of dermatomyositis. In JDM, the body's immune system attacks blood vessels throughout the body, causing inflammation called vasculitis. In the United States, the incidence rate of JDMS is approximately 2-3 cases per million children per year. The UK incidence is believed to be between 2-3 per million children per year, with some difference between ethnic groups. The sex ratio is approximately 2:1. Other Idiopathic inflammatory myopathies include; juvenile polymyositis (PM), which is rare and not as common in children as in adults. 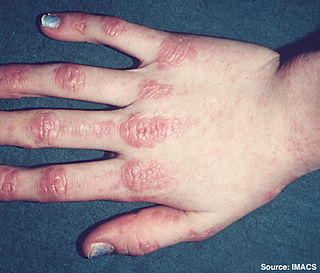 Dermatomyositis (DM) is a long-term inflammatory disorder which affects skin and the muscles. Its symptoms are generally a skin rash and worsening muscle weakness over time. These may occur suddenly or develop over months. Other symptoms may include weight loss, fever, lung inflammation, or light sensitivity. Complications may include calcium deposits in muscles or skin. 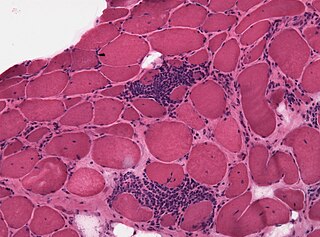 Myositis is inflammation or swelling of the muscles. Injury, medicines, infection, or an immune disorder can lead to myositis.

Masticatory muscle myositis (MMM) is an inflammatory disease in dogs affecting the muscles of mastication (chewing). It is also known as atrophic myositis or eosinophilic myositis. MMM is the most common inflammatory myopathy in dogs. The disease mainly affects large breed dogs. German Shepherd Dogs and Cavalier King Charles Spaniels may be predisposed. There is a similar disease of the eye muscles found in Golden Retrievers. Symptoms of acute MMM include swelling of the jaw muscles, drooling, and pain on opening the mouth. Ophthalmic signs may include third eyelid protrusion, red eyes, and exophthalmos. In chronic MMM there is atrophy of the jaw muscles, and scarring of the masticatory muscles due to fibrosis may result in inability to open the mouth (trismus). The affected muscles include the temporalis, masseter, and pterygoid muscles. The disease is usually bilateral.

Mixed connective tissue disease commonly abbreviated as MCTD, is an autoimmune disease characterized by the presence of elevated blood levels of a specific autoantibody, now called anti-U1 ribonucleoprotein (RNP) together with a mix of symptoms of systemic lupus erythematosus (SLE), scleroderma, and polymyositis. The idea behind the "mixed" disease is that this specific autoantibody is also present in other autoimmune diseases such as systemic lupus erythematosus, polymyositis, scleroderma, etc. MCTD was characterized as an individual disease in 1972 by Sharp et al., and the term was introduced by Leroy in 1980. 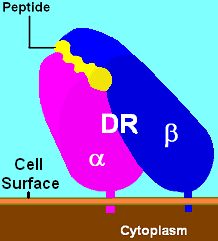 HLA-DR17 (DR17) is an HLA-DR serotype that recognizes the DRB1*0301 and *0304 gene products. DR17 is found at high frequency in Western Europe. DR17 is part of the broader antigen group HLA-DR3 and is very similar to the group HLA-DR18.

Although they vary in particulars, polymyositis, dermatomyositis and inclusion body myositis are idiopathic inflammatory myopathies (IIM) primarily characterized by chronic inflammation of human skeletal muscle tissue that ultimately causes the necrosis of muscle cells. This degeneration leads to muscle tissue wasting, weakness and fatigue among other serious effects. Until recently, exercise has been avoided as a type of therapy, and even forbidden due to the risk of triggering or amplifying inflammation. However, several studies have been conducted to test this assumption and have shown that aerobic exercise as well as resistance training can maintain and even improve quality of life for IIM-affected individuals without increased inflammatory response.

Acquired non-inflammatory myopathy (ANIM) is a neurological disorder primarily affecting skeletal muscle, most commonly in the limbs of humans, resulting in a weakness or dysfunction in the muscle. A myopathy refers to a problem or abnormality with the myofibrils, which compose muscle tissue. In general, non-inflammatory myopathies are a grouping of muscular diseases not induced by an autoimmune-mediated inflammatory pathway. These muscular diseases usually arise from a pathology within the muscle tissue itself rather than the nerves innervating that tissue. ANIM has a wide spectrum of causes which include drugs and toxins, nutritional imbalances, acquired metabolic dysfunctions such as an acquired defect in protein structure, and infections.

Statin-associated autoimmune myopathy (SAAM) is a very rare form of muscle damage caused by the immune system in people who take statin medications. However, there are cases of SAAM in patients who have not taken statin medication, and this can be explained by the exposure to natural sources of statin such as red yeast rice, which is statin rich. This theory is supported by the higher prevalence of statin-naive SAAM patients in Asian cohorts, who have statin-rich diets.