An inswinger is a type of delivery of the ball in the sport of cricket. In such a delivery the ball curves—or "swings"—in toward the batter's body and the wicket. By contrast, an outswinger swings away from the line of the batter and the wicket. Inswingers are bowled by swing bowlers.

The term has also been adopted into football commentary, in which context it describes a cross of the ball kicked so that it curves in toward the goal.

Inswing can be bowled from side-on, mid-way or chest on positions. But bowlers usually tend to pitch it in the good length spot or up to the batsman. It is the wrist position that is crucial, not the position of hips or shoulders. (See thumb position above).

When the bowler delivers the ball, he angles the seam so that it points slightly to the leg side. To help achieve this position the bowling arm should be near vertical, brushing close to the ear. At release the wrist should remain cocked so as to help impart backspin along the orientation of the seam. The angle of the seam to the direction of motion produces an aerofoil effect as the ball moves through the air, pushing it to the leg side. This is enhanced by differential air pressure caused by movement of air over the rough and smooth surfaces, which also tends to push the ball to the leg side. The result is that the ball curves, or swings in to the batsman.

Use of the inswinger

Inswingers are not considered to be as difficult for a right-handed batsman to play as an outswinger. This is because the ball moves in towards his body, meaning that his body is often behind the line of the ball, and any miscalculated shot that is hit by the edge of the bat may be intercepted by his body rather than flying to a fielder for a catch.

Inswingers can, however, sneak between the bat and pad to hit the wicket and bowl the batsman out, or miss the bat and hit the pads for a leg before wicket. A particularly effective delivery is the inswinging yorker, which can cause a batsman to attempt to pull his feet out of the line of the ball, leaving him vulnerable to being bowled, or out lbw if he is too slow. Another deceptive type are those pitched around the off-stump that appear to be passing the batmen by but swing in wildly to knock the stumps off. In the final match of 1983 World Cup, Balwinder Sandhu famously clean bowled Gordon Greenidge with a huge inswinger to which the batsman had shouldered arms.

Leg spin is a type of spin bowling in cricket. A leg spinner bowls right-arm with a wrist spin action. The leg spinner's normal delivery causes the ball to spin from right to left when the ball bounces on the pitch. For a right-handed batsman, that is away from the leg side, and this is where it gets the name leg break.

The flipper is a particular bowling delivery used in cricket, generally by a leg spin bowler. In essence it is a back spin ball. Squeezed out of the front of the hand with the thumb and first and second fingers, it keeps deceptively low after pitching and can accordingly be very difficult to play. The flipper is comparable to a riseball in fast-pitch softball.

In the game of cricket, a googly refers to a type of delivery bowled by a right-arm leg spin bowler. It is different from the normal delivery for a leg-spin bowler in that it is actually turning the other way. The googly is NOT a variation of the typical off spin type of delivery, in that the cricket ball is presented from the bowler's hand in such a way that once the ball pitches, it deviates in the opposite direction of a leg spinning type of delivery. It has also been colloquially and affectionately referred to as the wrong'un, Bosie or Bosey, with those latter two eponyms referring to Bernard Bosanquet, the bowler who originally devised and began using the googly.

Fielding in the sport of cricket is the action of fielders in collecting the ball after it is struck by the striking batter, to limit the number of runs that the striker scores and/or to get a batter out by either catching a hit ball before it bounces, or by running out either batter before they can complete the run they are currently attempting. There are a number of recognised fielding positions, and they can be categorised into the offside and leg side of the field. Fielding also involves preventing the ball from going to or over the edge of the field. 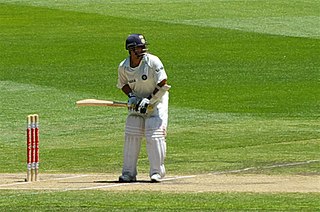 In cricket, batting is the act or skill of hitting the ball with a bat to score runs and prevent the loss of one's wicket. Any player who is currently batting is a batsman or batswoman, regardless of whether batting is their particular area of expertise. Batsmen have to adapt to various conditions when playing on different cricket pitches, especially in different countries - therefore, as well as having outstanding physical batting skills, top-level batsmen will have quick reflexes, excellent decision-making and be good strategists.

Seam bowling is a bowling technique in cricket whereby the ball is deliberately bowled on to its seam, to cause a random deviation when the ball bounces. Practitioners are known as seam bowlers or seamers.

An outswinger is a type of delivery of the ball in the sport of cricket. In such a delivery the ball curves—or "swings"—out and away from the batter's body and the wicket. By contrast, an inswinger swings in toward the batter and the wicket. Outswingers are bowled by swing bowlers.

In the sport of cricket there are two broad categories of bowlers: pace and spin. Pace bowlers rely mostly on the speed of the ball to dismiss batsmen, whereas spin bowlers rely on the rotation and turn of the ball.

A delivery or ball in cricket is a single action of bowling a cricket ball toward the batsman. Once the ball has been delivered, batsmen may attempt to score runs, with the bowler and other fielders attempting to stop this by getting the batsmen out. When the ball becomes dead, the next delivery can begin.

The Second Test of the 1948 Ashes series was one of five Tests in the Ashes cricket series between Australia and England. The match was played at Lord's in London from 24 to 29 June, with a rest day on 27 June 1948. Australia won the match by 409 runs to take a 2–0 lead, meaning that England would need to win the remaining three matches to regain The Ashes.