Inuyasha the Movie: Swords of an Honorable Ruler

Two centuries ago, the great dog-demon Tōga denies his elder son Sesshomaru's request for ownership of two of his swords, Tessaiga and So'unga. Afterwards, Tōga heads to a mansion guarded by an army of samurai where his human wife, Lady Izayoi, is giving birth. The army's leader, Takemaru of Setsuna, who is in love with Izayoi, attempts to kill her by stabbing her and setting the mansion aflame. Tōga defeats the army and cuts off one of Takemaru's arms to enter the mansion, and uses his third sword, Tenseiga, to revive Izayoi. Tōga forces her to flee the burning mansion with their newborn and fights Takemaru. After both are killed, Izayoi names her newborn half-demon son Inuyasha.

In the present day, Inuyasha travels through the Bone-Eater's Well from the Feudal era to visit Kagome Higurashi in the modern era. Unbeknownst to them, Kagome's family uncover an ancient sword as part of their shrine's treasures, which turns out to be So'unga. The spirit of So'unga's sheath, Saya, emerges before the sword finds its way to Inuyasha and Kagome. Saya tells Inuyasha that he must master the sword before it can destroy the modern world, but once he holds it, it possesses his arm and reverts him to his demon form, forcing him to return to the Feudal era. Inuyasha's friends, monk Miroku, demon slayer Sango, fox demon Shippo, and Sango's nekomata companion Kirara attempt to stop him, only to escape once Inuyasha uses the sword's deadly Dragon Twister attack. Kagome takes Saya with her to the Feudal era and reunites with everyone including Inuyasha's mentor Myoga, who knows Saya. They are eventually accompanied by blacksmith Totosai, the creator of Tōga's swords.

The possessed Inuyasha runs into his older brother, Sesshomaru, who battles Inuyasha for having taken up So’unga. So’unga orders Inuyasha to attack Sesshomaru's company, Jaken and Rin, until Kagome intervenes and uses the Beads of Subjugation necklace command on Inuyasha to release him from So’unga's possession. After So’unga flies off to find a new host, Sesshomaru leaves Jaken and Rin behind, while Inuyasha leaves an unconscious Kagome with them, vowing to destroy So’unga himself. After being joined by her friends, Totosai reveals that So’unga is possessed by an ancient evil demon, following its sealing since there were no instructions given by Tōga as to what to do with it following his death. Meanwhile, So’unga retrieves Sesshomaru’s severed arm from the past and revives Takemaru, who, equipped with the sword and a new body, vows revenge on Tōga by killing his sons. Takemaru takes over a nearby castle and slays its army, resurrecting the approximately two-thousand soldiers as an army of the undead, as well as opening a portal to the netherworld.

Kagome and the rest of the group, including Jaken and Rin, join Inuyasha and Sesshomaru in a battle against Takemaru’s army. Despite inflicting heavy casualties on the soldiers, Miroku uses his Wind Tunnel to eliminate the rest. Kagome informs Inuyasha that, according to Totosai, the only way to defeat Takemaru and So’unga is to combine the forces of Tessaiga's Backlash Wave and the Dragon Strike of Sesshomaru's Tōkijin; Inuyasha initially refuses, noting that he and Sesshomaru could never fight side-by-side. Inuyasha kills Takemaru, forcing So’unga to form a physical body of its own. Inuyasha and Sesshomaru continuously fail to destroy Takemaru individually; the brothers eventually give in and use the powers of their swords to destroy So’unga's body and send the sword into the netherworld. Tōga’s spirit appears, remarking that he's proud of his sons before the portal to the netherworld closes. Sesshomaru departs with Jaken and Rin as Inuyasha and his allies look over the surrounding environment turning back to normal. Saya may refer to:

Inuyasha is a fictional character and the titular protagonist of Rumiko Takahashi's manga series InuYasha and its anime adaptation.

Tenchu (天誅) is an action-adventure stealth video game series, originally developed by Japanese developer Acquire, where the player assumes the role of a ninja in 16th-century Japan. The title in Japanese literally translates in English as "Divine Retribution", with 天 (ten) meaning heaven and 誅 (chū) meaning death penalty. 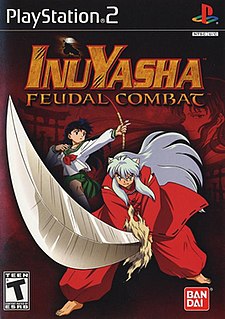 Inuyasha: Feudal Combat is a 3D computer graphics fighting game for the PlayStation 2 based on the Inuyasha manga and anime series.

Inuyasha: The Secret of the Cursed Mask, known in Japan as Inuyasha: The Cursed Mask, is a role-playing video game for the PlayStation 2 based on the manga and anime series Inuyasha. The player is able to choose to play as a female named Kaname Kururugi or as a male named Michiru Kururugi. Regardless of the chosen gender, the character is referred to using the last name Kururugi. However, in the North American release, the character is referred to using his/her first name. 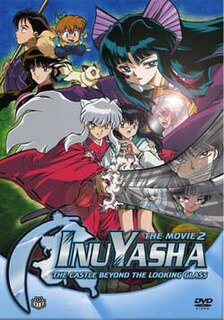 Inuyasha the Movie: The Castle Beyond the Looking Glass is the second film of the Inuyasha series. The song, "Yurayura", is performed by Every Little Thing. 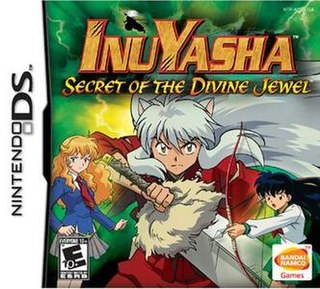 Inuyasha: Secret of the Divine Jewel is a role-playing video game (RPG) for the Nintendo DS. It was developed by Art Co., Ltd and Frontier Groove, Inc., published by Namco Bandai Games, and released in North America on January 23, 2007. Once again, Inuyasha and his friends are off on another adventure through the Warring States Period.

Inuyasha the Movie: Fire on the Mystic Island alternately titled InuYasha The Movie 4: Fire on Horai Island is a 2004 Japanese animated film directed by Toshiya Shinohara and written by Katsuyuki Sumisawa. It is the fourth film of the Inuyasha series. After the film's release, the anime adaptation from the manga concluded with the final season for the anime series, Inuyasha: The Final Act. 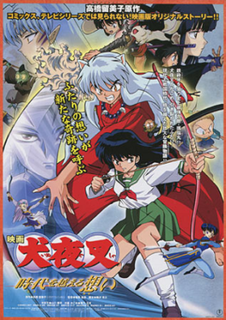 Inuyasha the Movie: Affections Touching Across Time is a 2001 Japanese animated film directed by Toshiya Shinohara and written by Katsuyuki Sumisawa. It is the first film of the Inuyasha series. The song, "No More Words" is performed by Ayumi Hamasaki.

InuYasha: A Feudal Fairy Tale is a 2D fighting game based on the manga and anime series Inuyasha. It consists of battles and minigames in an effort to retrieve shards of the sacred Jewel of Four Souls, essentially following the overall plot of the series.

Yashahime: Princess Half-Demon is a Japanese anime television series produced by Sunrise. It is a sequel to the Inuyasha anime series, which itself is based on the original manga series written and illustrated by Rumiko Takahashi. It is the story of Towa Higurashi and Setsuna, Sesshomaru and Rin's twin daughters, and Moroha, Inuyasha and Kagome Higurashi's teenage daughter. The series aired from October 3, 2020 to March 20, 2021. A second season is set to premiere on October 2, 2021.

Yashahime: Princess Half-Demon is a Japanese anime television series produced by Sunrise and is the anime sequel to Inuyasha: The Final Act. The series was first announced in May 2020 and was directed by Teruo Sato with main character designs by Inuyasha original creator Rumiko Takahashi. Most of the main cast and staff from Inuyasha returned, with Katsuyuki Sumisawa in charge of the scripts, Yoshihito Hishinuma in charge of the anime character designs and Kaoru Wada composing the music. It aired from October 3, 2020 to March 20, 2021 on Yomiuri TV and Nippon TV. The opening theme "New Era" is performed by the male idol group SixTONES, while the ending theme "Break" is performed by Uru. The second opening theme "Burn" is performed by NEWS, while the second ending theme "Kesshō" is performed by Ryokuōshoku Shakai.