Last updated May 18, 2021
African-American weekly magazine based in Chicago, Illinois

Jet is an American weekly magazine that focuses on news, culture, and entertainment related to the African-American community. Founded in November 1951 by John H. Johnson of the Johnson Publishing Company in Chicago, Illinois. [2] [3] The magazine was billed as "The Weekly Negro News Magazine". Jet chronicled the civil rights movement from its earliest years, including the murder of Emmett Till, the Montgomery bus boycott, and the activities of civil rights leader Martin Luther King Jr.

First published on November 1, 1951, in small digest-sized format from its inception, Jet printed in all or mostly black-and-white until its December 27, 1999, issue. In 2009, Jet's publishing format was changed; it was published every week with a double issue published once each month. Johnson Publishing Company published the final print issue on June 23, 2014, continuing solely as a digital magazine app. [4] [5] In 2016, Johnson Publishing sold Jet and its sister publication Ebony to private equity firm Clear View Group. The publishing company is now known as Ebony Media Corporation. [6]

The first issue of Jet was published on November 1, 1951, by John H. Johnson in Chicago, Illinois. [7] Johnson called his magazine Jet because he wanted the name to symbolize "Black and speed". In Jet's first issue, Johnson wrote, "In the world today everything is moving along at a faster clip. There is more news and far less time to read it." [7] [8] Jet's goal was to provide "news coverage on happenings among Negroes all over the U.S.—in entertainment, politics, sports, social events as well as features on unusual personalities, places and events." [8] Redd Foxx called the magazine "the Negro bible". [9]

Jet became nationally known in 1955 for its shocking and graphic coverage of the murder of Emmett Till. Its popularity was enhanced by its continuing coverage of the burgeoning civil rights movement. [9] The publication of Till's brutalized corpse on the cover of the issue inspired the black community to address racial violence, catalyzing the civil rights movement. The Johnson Publishing Company's campaign for economic, political and social justice influenced its inclusion of progressive views. [10] From 1970 to 1975, Jet challenged conservative readers' anti-abortion stance by giving physicians who performed abortions a platform to discuss scientific facts about abortion procedures. [11]

In May 2014, the publication announced the print edition would be discontinued and switch to a digital format in June. [12]

In June 2016, after 71 years, Jet and its sister publication Ebony were sold by Johnson Publishing to Clear View Group, an Austin, Texas-based private equity firm, for an undisclosed amount but the sale did not include the photo archives. [13] In July 2019, three months after Johnson Publishing filed for Chapter 7 Bankruptcy liquidation, it sold its historic Jet and Ebony photo archives to a consortium of foundations to be made available to the public. [14] [15]

Jet coverage includes: fashion and beauty tips, entertainment news, dating advice, political coverage, health tips, and diet guides, in addition to covering events such as fashion shows. The cover photo usually corresponds to the focus of the main story. Some examples of cover stories might be a celebrity's wedding, Mother's Day, or a recognition of the achievements of a notable African American. Many issues are given coverage to show the African-American community that if they want to reach a goal, they have to be willing to work for it. Jet also claims to give young female adults confidence and strength because the women featured therein are strong and successful without the help of a man. Since 1952, Jet has had a full-page feature called "Beauty of the Week". This feature includes a photograph of an African-American woman in a swimsuit (either one-piece or two-piece, but never nude), along with her name, place of residence, profession, hobbies, and interests. Many of the women are not professional models and submit their photographs for the magazine's consideration. The purpose of the feature is to promote the beauty of African-American women. Similar to Essence, Jet routinely deplores racism in mainstream media, especially its negative depictions of black men and women. However, Hazell and Clarke report that between 2003 and 2004, Jet and Essence themselves ran advertising that was pervaded with racism and white supremacy. [16] In fact, Jet has published colorist advertisements in the past. An advertisement for Nadinola, a bleaching cream, appeared in an issue published in 1955. It depicts a light-skinned woman as the center of men's attention. [17]

Ebony is a monthly magazine that focuses on news, culture, and entertainment. Its target audience is the African-American community, and its coverage includes the lifestyles and accomplishments of influential black people, fashion, beauty, and politics.

John Harold Johnson was an American businessman and publisher. Johnson was the founder of the Johnson Publishing Company, headquartered in Chicago, Illinois. Johnson's Ebony (1945) and Jet (1951) magazines were among the most influential African-American businesses in media beginning in the second half of the twentieth century. In 1982, Johnson became the first African American to appear on the Forbes 400. In 1987, Johnson was named Black Enterprise Entrepreneur of the year.

Era Bell Thompson was a graduate of the University of North Dakota (UND) and an editor of Ebony magazine. She was also a recipient of the governor of North Dakota's Roughrider Award. A multicultural center at UND is named after her.

Johnson Publishing Company, Inc. (JPC) was an American publishing company founded in November 1942 by African-American businessman John H. Johnson. It was headquartered in Chicago, Illinois. JPC was privately held and run by Johnson until his death in 2005. Led by its flagship publication, Ebony, Johnson Publishing was at one time the largest African-American-owned publishing firm in the United States. JPC also published Jet, a weekly magazine, from November 1951 until June 2014, when it became digital only. In the 1980s, the company branched into film and television.

Sepia, a photojournalistic magazine styled like Look and sometimes compared to Ebony, featured articles based primarily on achievements of African Americans. It was part of the rise of postwar publications and businesses aimed at black audiences. The magazine was founded in 1946 as Negro Achievements by Horace J. Blackwell, an African-American clothing merchant of Fort Worth, Texas. He had already founded The World's Messenger in 1942, featuring romance-true confession type stories of working-class blacks. Blackwell died in 1949.

Lerone Bennett Jr. was an African-American scholar, author and social historian, known for his analysis of race relations in the United States. His best-known works include Before the Mayflower (1962) and Forced into Glory (2000), a book about U.S. President Abraham Lincoln. 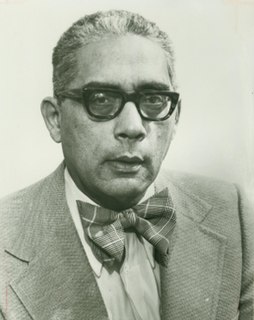 Simeon Saunders Booker Jr. was an African-American journalist whose work appeared in leading news publications for more than 50 years. He was known for his journalistic works during the civil rights movement and for his coverage of the 1955 murder of 14-year-old Emmett Till. He worked for The Washington Post, Jet, and Ebony.

BLK was a monthly American newsmagazine, similar in format to Time and The Advocate, which targeted its coverage of people, events and issues to African-American LGBT readers.

Eunice Walker Johnson was an American businesswoman. Johnson was the wife of publisher John H. Johnson and an executive at Johnson Publishing Company. Johnson was best known as the founder and director of the Ebony Fashion Fair, which was started in 1958 as a hospital fundraiser and became an annual worldwide fashion tour that highlighted fashion for African-American women that ran until a year before her death. 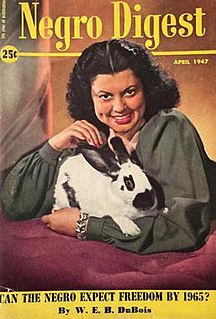 Opportunity: A Journal of Negro Life was an academic journal published by the National Urban League (NUL). The journal acted as a sociological forum for the emerging topic of African-American studies and was known for fostering the literary culture during the Harlem Renaissance. It was published monthly from 1923 to 1942 and then quarterly through 1949.

Ben Burns was an American pioneering editor of black publications and a public relations executive in Chicago. He was a “top executive editor” for the Johnson Publishing Company who became so well known as a “black newspaperman” – even though he was white and Jewish – that he was invited to submit his biography for inclusion in Who's Who in Colored America.

Ebony Fashion Fair was an annual fashion event created by Eunice Johnson, co–founder of the Chicago, Illinois–based Johnson Publishing Company. The show ran across the United States and other countries from 1958 until 2009. In addition to the fashion fair, the company also created a cosmetic line named Fashion Fair Cosmetics, in 1973. As of 2017, Fashion Fair Cosmetics are still available for purchase.

In the United States, black genocide is the characterization that the mistreatment of African Americans by both the United States government and white Americans, both in the past and the present, amounts to genocide. The decades of lynchings and long-term racial discrimination were first formally described as genocide by a now defunct organization, the Civil Rights Congress, in a petition which it submitted to the United Nations in 1951. In the 1960s, Malcolm X accused the US government of engaging in genocide against black people, citing long-term injustice, cruelty, and violence against blacks by whites. 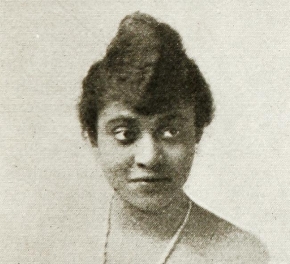 Gerri Major (1894–1984) was an African-American woman who lived in Harlem during a career that stretched from the 1920s through the 1970s. She was successful in a number of overlapping vocations including journalist, editor, newscaster, publicist, public health official, author, and community leader. An article celebrating her 80th birthday said "Gerri was definitely one of the 'new Negroes' of the early 20th Century" adding that by the end of the 1930s she had become "one of the best known black women in America."

Freda DeKnight (1909–1963) was the first food editor of Ebony magazine and the author of A Date With A Dish: A Cookbook of American Negro Recipes, considered the first major cookbook written by an African-American for an African-American audience. She was a pioneer for the working class, who was able to articulate an unmatched love of food. DeKnight's legacy lives on through the continued use of her cook book.

John Warren Moutoussamy (1922–1995) was an American architect, best known for designing the headquarters building of the Johnson Publishing Company in downtown Chicago, Illinois. He was the first African-American architect to design a high-rise building in Chicago.

JoAnna LaSane, also written as Joanna Lasane, was an American model and arts administrator. She served on the New Jersey State Council of the Arts, and was director of the Atlantic City Children's Theatre. In 1996 she was inducted into the Atlantic City Women's Hall of Fame.