Kelly Keeling was born on June 25, 1966 and is an American musician and songwriter. Keeling started playing at the age of 14 and began his career as the lead singer of the American heavy metal band Baton Rouge. [1] Throughout his career Keeling worked with major hard rock acts, wrote movie soundtracks and also played with Christian rock bands. [2]

At the age of 14 Kelly earned a GED and commenced a career in music--which led him all over the world several times as a recording artist, singer, songwriter, multi instrumentalist, and producer.

Being signed by Ahmet Ertegun of Atlantic Records with the band Baton Rouge put him in the public eye with MTV, AOR radio exposure, and two USA tours.

Kelly and Yngwie Malmsteen recorded Speed King for a Deep Purple Tribute - Smoke on the Water.

Kelly was vocalist for The John Norum Band--producing two albums, and touring in Sweden. He appears on the albums: Another Destination and Worlds Away.

He sang on Heaven & Earth's Windows to the World, King Kobra's Hollywood Trash and played keyboards and sang harmony on ...'sDoin' Business As...

He became The Michael Schenker Group's vocalist for the albums: The Unforgiven and The Unforgiven World Tour. He also appeared on the 25th anniversary CD Tales of Rock 'n' Roll featuring all-MSG singers. Kelly wrote three songs for this album-- two for previous MSG vocalists Graham Bonnet and Gary Barden and one for himself (Big Deal) which opens the album.

Kelly was recruited by Don Dokken to step-in as assistant songwriter, background vocalist and producer for 7 songs on Dokken's CD Long Way Home. Kelly also writes and produces with Dokken for the album Hell to Pay in 2004. The same year was featured on album Furious George and toured with George Lynch.

Kelly was featured vocalist on Erik Norlander's album Music Machine as well a European tour in June-- also performed songs from Kelly's solo album which was in the mixing stage at that time. This three-piece band featuring Erik Norlander and Vinnie Appice performed shows as Kelly Keeling during a three-day festival. Kelly toured again as singer and bassist with Lana Lane and Erik Norlander in the USA, Europe, and Russia in the Summer of 2004. He also released a live album Stars Rain Down.

Keeling recorded and toured with the band O'2L-- featuring all members of the west coast branch of the Trans-Siberian Orchestra. Kelly recorded eight songs intended for another solo album which eventually appeared in the first studio album of the project Paris Keeling with executive producer Marty Paris. While touring with Trans-Siberian Orchestra he received gold and platinum album awards with TSO as well as Wayne Morrisson's Rock4Xmas--featuring Badfinger member Joey Molland. On this tour he performed backing vocals for Eddie Money as well as his solo career retrospective set The Kelly Keeling Show with band mates Ethan Brosh, Alex Pierce and Dave Vandiggitty.

Kelly formed the band Balance in 2012 with guitarist/co- writer Kim Roy, (formerly of the band Kingdom), and reunited Baton Rouge for a new recording on Frontier Records, which was cancelled in 2013. [3]

With Heaven and Earth

George Lynch is an American hard rock guitarist and songwriter. Lynch is best known for his work with heavy metal band Dokken and his post-Dokken solo band, Lynch Mob. Lynch is considered to be one of the most influential and famous 1980s metal guitarists. He is known for his unique playing style and sound. He is ranked No. 47 on "100 Greatest Guitarists of All Time" by Guitar World magazine and is also ranked No. 10 on "Top 10 Metal Guitarists of All Time" by Gibson. 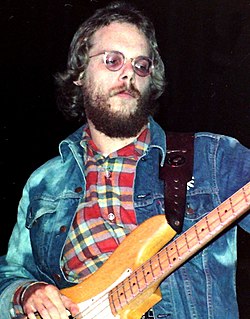 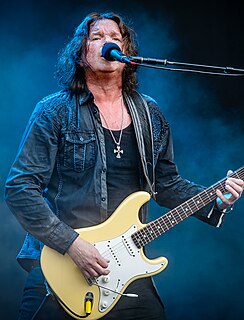 John Norum is a Norwegian-Swedish rock guitarist and one of the founders of the Swedish rock band Europe. Concurrent to his role with Europe, he also maintains a career as a solo artist. 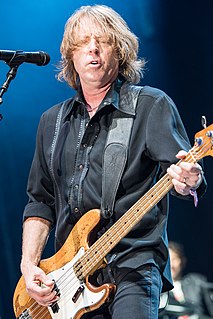 XYZ was originally created in Lyon, France, where Pat Fontaine and Terry Ilous were born and grew up. In 1984 they moved to Los Angeles, California, United States. XYZ started off as the unofficial house band of "The Whisky A Go Go" nightclub in Los Angeles. The original members were Terry Ilous (vocals), Bobby Pieper (guitars), Pat Fontaine (bass) and Joey Pafumi (drums). A tour of the US with Ted Nugent followed the success of their 1989 Enigma released debut album, and they were signed by major label Capitol for their second. 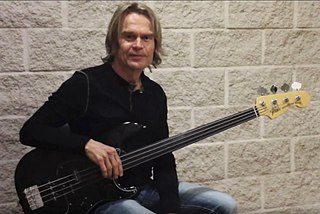 Nothin' But Trouble is the second and final studio album by hard rock band Blue Murder. Released on 31 August 1993 by Geffen Records, the album was produced by the band's vocalist-guitarist John Sykes. 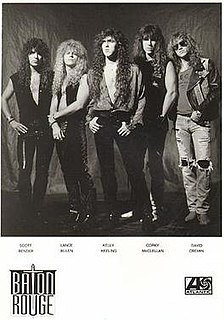 Baton Rouge was an American hard rock band, formed in 1986 in Pearl River, Louisiana. The band produced two albums and enjoyed limited success during the final part of the hair metal explosion in the early 1990s, before disbanding. All the band members went on to work with other hard rock recording artists Lance Bulen. Vocalist and guitarist Kelly Keeling performed with Michael Schenker Group and Trans-Siberian Orchestra. 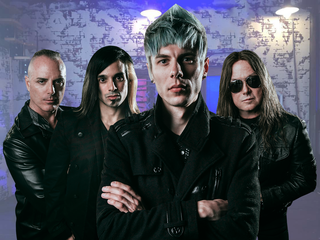