Kenneth Edward Greene (born May 8, 1956) is a former professional American football player who played safety in the National Football League (NFL) for seven seasons, for the St. Louis Cardinals (1978–1982) and San Diego Chargers (1983–1984).

Born in Lewiston, Idaho, Greene graduated from Omak High School in 1974 and played college football at Washington State University in the Pacific-8 Conference. He was selected in the first round of the 1978 NFL Draft (19th overall), the Cougars' first selection in the first round in thirteen years. [1]

He appeared in the 13th season of The Amazing Race . His partner was his wife, Tina Greene. [2] The goal on the race was to try to mend their broken marriage. They finished the race in 2nd place and ultimately lost the $1 Million grand prize and The Amazing Race 13 winners' title to the brother and sister team of Nick and Starr, but agreed to give their marriage another try. [3]

Marvin Ronald Lewis is an American football coach who is the head coach at USC. Previously, Lewis was the head coach of the Cincinnati Bengals of the National Football League (NFL) for 16 seasons. He came to prominence as the defensive coordinator of the Baltimore Ravens from 1996 to 2001, whose defense in 2000 set the record for the fewest points allowed in a 16-game season and led the franchise to their first Super Bowl title in Super Bowl XXXV. This success resulted in Lewis being named the Bengals' head coach, where he served from 2003 to 2018. He was also a commentator for the Alliance of American Football (AAF). 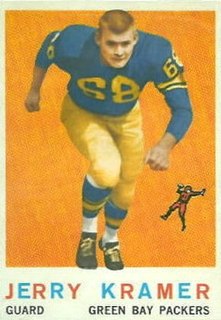 Borah High School is a three-year public secondary school in Boise, Idaho, one of four traditional high schools in the Boise School District. It serves students in grades 10–12 in the southwest portion of the district. It is named after William Borah(1865–1940), a prominent U.S. Senator and a presidential candidate in 1936. 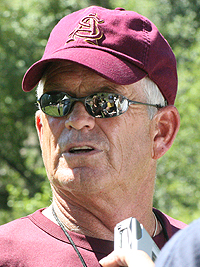 Steven Packer Preece is a former professional football player, a defensive back in the NFL for 9 seasons, from 1969 to 1977. He played his college football at Oregon State, where he was a successful option quarterback.

Irvin Acie Cross was an American professional football player and sportscaster. He played cornerback in the National Football League (NFL) and was a two-time Pro Bowl selection with the Philadelphia Eagles. Working with CBS, Cross was the first African American sports analyst on national television. He was an initial co-host of The NFL Today, which became the pregame show standard for all television networks.

Edward Ross Troxel was a high school and college football coach in Colorado, Idaho, and eastern Washington. His most notable coaching stops were at Borah High School in Boise, the University of Idaho in Moscow, and Kennewick High School.

Eric Lamone Yarber is an American football coach and former college player who is currently the wide receivers coach for the Los Angeles Rams of the National Football League (NFL). He played two seasons in the NFL as a wide receiver for the Washington Redskins in 1986 and 1987, which included a win in Super Bowl XXII.

John Richard Yarno, Jr. is a former professional football player, an offensive lineman with the Seattle Seahawks of the National Football League. He was selected in the fourth round of the 1977 NFL Draft by the Seahawks, the 87th overall pick, and played for six seasons, from 1977 through 1982.

The Idaho Vandals are the college football team that represents the University of Idaho and plays its home games at the Kibbie Dome, an indoor facility on campus in Moscow, Idaho. Idaho is a member of the Big Sky Conference in the Football Championship Subdivision (FCS). The head coach is Paul Petrino, who began his tenure in 2013.

The Idaho State Bengals football program represents Idaho State University in college football. The Bengals play their home games at Holt Arena, an indoor facility on campus in Pocatello, Idaho. Idaho State is a charter member of the Big Sky Conference in NCAA Division I Football Championship Subdivision (FCS). Through the 2020 season, the Bengals have an all-time record of 477–533–20 (.473).

The 1983 Idaho Vandals football team represented the University of Idaho in the 1983 NCAA Division I-AA football season. The Vandals, led by second-year head coach Dennis Erickson, were members of the Big Sky Conference and played their home games at the Kibbie Dome, an indoor facility on campus in Moscow, Idaho.

Shiloh Keo is a former American football safety. Selected in the fifth round of the 2011 NFL Draft by the Houston Texans, he played college football for the University of Idaho.

Michael Thomas Levenseller is a former American football wide receiver who played three seasons in the National Football League (NFL) with the Tampa Bay Buccaneers, Buffalo Bills and Cincinnati Bengals. He was drafted by the Oakland Raiders in the sixth round of the 1978 NFL Draft. He played college football at Washington State. Levenseller was also a member of the Edmonton Eskimos and Calgary Stampeders of the Canadian Football League.

The 1978 Idaho Vandals football team represented the University of Idaho in the 1978 NCAA Division I-AA football season. The Vandals were led by new head coach Jerry Davitch and were members of the Big Sky Conference. They played their home games at the Kibbie Dome, an indoor facility on campus in Moscow, Idaho. Davitch was previously an assistant at the Air Force Academy for five seasons under longtime head coach Ben Martin, preceded by four years as a high school head coach in Tucson, Arizona.

The 1957 Idaho Vandals football team represented the University of Idaho in the 1957 NCAA University Division football season. The Vandals were led by fourth-year head coach Skip Stahley and were members of the Pacific Coast Conference. Home games were played on campus at Neale Stadium in Moscow, with one home game in Boise at old Bronco Stadium at Boise Junior College. Led on the field by quarterbacks Howard Willis and Gary Kenworthy, Idaho compiled a 4–4–1 overall record and were 0–3 in the PCC.

The University of Idaho's football program, nicknamed the "Vandals", began in 1893.