Allentown is a city in Lehigh County, Pennsylvania. It is Pennsylvania's third-most-populous city and the 233rd-largest city in the United States. As of the 2010 census, the city had a total population of 118,032. As of 2019, it is the fastest growing major city in Pennsylvania with an estimated 121,442 residents. As of the 2020 Census, the population is 125,845, making it the third-largest city in Pennsylvania, behind Philadelphia and Pittsburgh. It is the county seat of Lehigh County and the largest city in the metropolitan area known as the Lehigh Valley, which had a population of 821,623 residents as of 2010. The city, founded in 1762, celebrated its 250th anniversary in 2012.

The Lehigh Valley, known officially by the United States Census Bureau and the United States Office of Management and Budget as the Allentown–Bethlehem–Easton, PA-NJ Metropolitan Statistical Area and referred to colloquially as The Valley, is a metropolitan region officially consisting of Carbon, Lehigh and Northampton Counties in eastern Pennsylvania and Warren County in northwestern New Jersey. The Lehigh Valley's largest city, with a population of 120,443 residents as of the 2010 U.S. Census, is Allentown. The Pennsylvania portion of the region is part of Philadelphia's designated media market.

Keith Robert Dorney is a former American college and professional football player who was an offensive lineman in the National Football League (NFL) for nine seasons in the 1970s and 1980s. He played college football for Pennsylvania State University, and received All-American honors. Dorney was chosen in the first round of the 1979 NFL Draft, and played for the NFL's Detroit Lions during his entire professional career.

Tony Alexander Stewart is a former American football tight end. He is the founder and executive director of the non-profit Beyond the Locker, which helps youth and athletes. He also works as a lead consultant to the NFL in the Player Engagement Department.

Allentown Central Catholic High School (ACCHS) is a private, parochial school located at 301 North Fourth Street in Allentown, Pennsylvania, in the United States. Located in the Roman Catholic Diocese of Allentown, ACCHS predominantly serves students from the Lehigh Valley region of the state.

Steve Aponavicius is an American football kicker. In 2009, he became the leading scorer in the history of Boston College's football program. A left-footed soccer convert, Aponavicius made his career debut against nationally ranked Virginia Tech on October 12, 2006 and successfully kicked two field goals and two extra points in the Eagles' 22–3 victory. 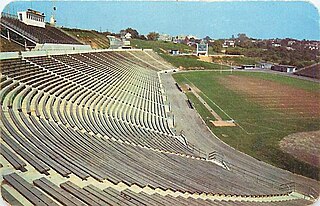 John C. Gregory Jr. was an American football player, coach, and college athletics administrator. He served as the head football coach at East Stroudsburg University of Pennsylvania (1959–1965), Villanova University (1967–1969), and the University of Rhode Island (1970–1975), compiling a career college football record of 87–57–4. He was the athletic director at Bowling Green State University from 1982 to 1994.

Akeel Joh-Vonnie Lynch is a retired American football running back who last played for the Nevada Wolf Pack football team. He grew up in Toronto, Ontario, Canada with divorced parents, but at age seven, his father was murdered. Later, he moved to New York, where he played high school football and eventually accepted a scholarship offer to play football at Penn State. After redshirting his freshman year, he emerged as a reserve player the next season, and by his sophomore year of eligibility, he had emerged as Penn State's top running back.

The 1977 Lehigh Engineers football team represented Lehigh University during the 1977 NCAA Division II football season, and completed the 94th season of Engineers football. The Engineers played their home games at Taylor Stadium in Bethlehem, Pennsylvania. The 1977 team came off a 6–5 record from the previous season. The team was led by coach John Whitehead. The team finished the regular season with a 9–2 record and made the NCAA Division II playoffs. The Engineers defeated the Jacksonville State Gamecocks 33–0 in the National Championship Game en route to the program's first NCAA Division II Football Championship.

Timothy John Cramsey is an American football coach and former player. He is currently the offensive coordinator and quarterbacks coach at Marshall University.

The 1986 Lafayette Leopards football team was an American football team that represented Lafayette College during the 1986 NCAA Division I-AA football season. In the first year of play for the Colonial League, Lafayette tied for second place.

The 1991 Lafayette Leopards football team was an American football team that represented Lafayette College during the 1991 NCAA Division I-AA football season. Lafayette tied for second in the Patriot League.