Officially known as the NFL Draft, the event is the NFL's primary mechanism for distributing newly professional players finished with their college football careers to its teams. The draft order is determined based on the previous season's standings; the teams with the worst win–loss records receive the earliest picks. [2] Teams that qualified for the NFL playoffs select after non-qualifiers, and their order depends on how far they advanced. The final two selections in the first round are reserved for the Super Bowl runner-up and champion. [3] Draft picks are tradable, and players or other picks can be acquired with them. [2] [3]

The National Football League (NFL) is a professional American football league consisting of 32 teams, divided equally between the National Football Conference (NFC) and the American Football Conference (AFC). The NFL is one of the four major professional sports leagues in North America, the highest professional level of American football in the world, and the wealthiest professional sport league by revenue. The NFL's 17-week regular season runs from early September to late December, with each team playing 16 games and having one bye week. Following the conclusion of the regular season, seven teams from each conference advance to the playoffs, a single-elimination tournament culminating in the Super Bowl, which is usually held on the first Sunday in February and is played between the champions of the NFC and AFC. 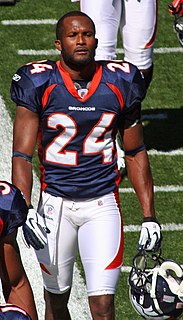 Roland "Champ" Bailey Jr. is a former American football cornerback in the National Football League (NFL). He played college football for Georgia, where he earned consensus All-America honors, and was drafted by the Washington Redskins in the first round of the 1999 NFL Draft. He is the brother of former NFL linebacker Boss Bailey.

The National Football League Draft, also called the NFL Draft or the Player Selection Meeting, is an annual event which serves as the league's most common source of player recruitment. Each team is given a position in the drafting order in reverse order relative to its record in the previous year, which means that the last place team is positioned first. From this position, the team can either select a player or trade their position to another team for other draft positions, a player or players, or any combination thereof. The round is complete when each team has either selected a player or traded its position in the draft. The first draft was held in 1936, and has been held every year since.

John Antonio Abraham is a former American football outside linebacker and defensive end who played 15 seasons in the National Football League (NFL). He played college football at South Carolina, and was drafted by the New York Jets in the first round of the 2000 NFL Draft. Abraham also played for the Atlanta Falcons and Arizona Cardinals.

The 2001 NFL Draft was the 66th annual meeting of National Football League (NFL) franchises to select newly eligible football players. The draft, which is officially referred to as the "NFL Player Selection Meeting," was held at the Theater at Madison Square Garden in New York City, New York on April 21–22, 2001. 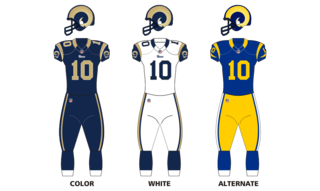 The professional American football team now known as the Los Angeles Rams played in St. Louis, Missouri as the St. Louis Rams from 1995 until the end of the 2015 season, before relocating back to Los Angeles where the team played from the 1946 season to the 1994 season.

Calais Malik Campbell is an American football defensive end for the Baltimore Ravens of the National Football League (NFL). He played college football at the University of Miami, and was drafted by the Arizona Cardinals in the second round of the 2008 NFL Draft.

Chandler James Jones is an American football outside linebacker for the Arizona Cardinals of the National Football League (NFL). Jones was selected by the New England Patriots with the 21st overall pick of the 2012 NFL Draft. He played college football at Syracuse. He is the younger brother of current UFC Light Heavyweight Champion Jon Jones and of former National Football League (NFL) player Arthur Jones. 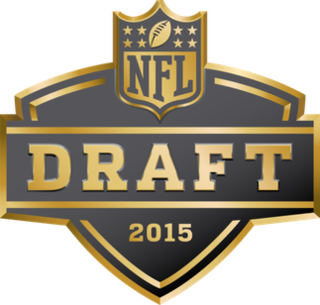 The 2015 NFL Draft was the 80th annual meeting of National Football League (NFL) franchises to select newly eligible football players. It took place in Chicago at the Auditorium Theatre and in Grant Park, from April 30 to May 2. The previous fifty NFL drafts had been held in New York City. The 2015 NFL draft was the first to feature an outdoor component, where fans would be able to see the Commissioner on the Auditorium Theatre stage from across the street in the park; this area was called Draft Town. The Tampa Bay Buccaneers held the right to select first because they had the league's worst record in the previous season. The Arizona Cardinals made the final pick in the draft, commonly called Mr. Irrelevant.