The Kingdom of Kaffa (c. 1390–1897) was an early modern state located in what is now Ethiopia, with its first capital at Bonga. The Gojeb River formed its northern border, beyond which lay the Gibe kingdoms; to the east the territory of the Konta and Kullo peoples lay between Kaffa and the Omo River; to the south numerous subgroups of the Gimira people, and to the west lay the Majangir people. [1] The native language, also known as Kaffa, is one of the Omotic group of languages.

Kaffa was divided into four sub-groups, who spoke a common language Kefficho, one of the Gonga/Kefoid group of Omotic languages; a number of groups of foreigners, Ethiopian Muslim traders and members of the Ethiopian Church, also lived in the kingdom. There were a number of groups of people, "but with the status of submerged status", who also lived in the kingdom; these included the Manjo, or hunters; the Manne, or leatherworkers; and the Qemmo, or blacksmiths. [2] The Manjo even had their own king, appointed by the King of Kaffa, and were given the duties of guarding the royal compounds and the gates of the kingdom. [3] The kingdom was overrun and conquered in 1897, and was eventually annexed by Ethiopia.

The land where this former kingdom lay is in the southern parts of the Ethiopian Highlands with stretches of forest. The mountainous land is very fertile, capable of three harvests a year.

The Kingdom of Kaffa was founded c.1390 by Minjo, who according to oral tradition ousted the Mato dynasty of 32 kings. However, his informants told Amnon Orent, "no one remembers the name of a single one." [4] The first capital Bonga was either founded or captured by Bon-noghe; it was later replaced by Anderaccha, but Bonga retained its importance.[ citation needed ]

During the 16th century, all of the territories north of the Gojeb River were lost to the Oromo migrations. Also in the later 16th century, the Emperor of Ethiopia Sarsa Dengel convinced the kingdom to officially accept Christianity as its state religion. As a result, the church of St. George was dedicated at Baha; the building preserved a tabot bearing the name of Emperor Sarsa Dengel. Over the following centuries the influence of the Ethiopian government grew weak, and Christianity more or less disappeared, although the church of St. George was used as a "male house of ritual of George" until late in the 19th century when Christian practices were reintroduced. [5]

Beginning with Gali Ginocho (1675–1710), the kings of Kaffa began to expand the borders of their kingdom, annexing the neighboring small Gimira states of She, Benesho and Majango. The neighboring state of the Welayta came under their control in the reign of Tato Shagi Sherocho (1775–1795), who extended the boundaries of his kingdom as far as the Omo to the southeast and almost to the confluence of the Omo and the Denchya to the south. [6] It was during the reign of King Hoti Gaocho (1798–1821), that the territory of the Kaffa kings reached its maximum. According to Orent, the traditions of the Kaffa people relate that he ruled far and wide, conquering wherever he went, even as far afield as Wolleta and Kambaata. "To this day," concludes Orent, "some people still talk about the time that their ancestors defeated all their enemies and sat at the foot of a famous tree in Wolliso and decided not to go farther into Shoa province." [7]

The last Kaffa king, Gaki Sherocho, resisted for months the combined armies of Wolde Giyorgis, Ras Damisse, and King Abba Jifar II of Jimma, until he was captured 11 September 1897, and was first sent to Ankober, then to Addis Ababa. Kaffa was then held as a fief by Wolde Giyogis until 1914. [3] During his visit to Kaffa in 1897, Alexander Bulatovich had the opportunity to study the culture of the inhabitants, describing them in his book With the Armies of Menelik II, emperor of Ethiopia, identifying a number of practices in common with the more familiar Amhara people. [8]

The inhabitants suffered greatly from slave-raiding during the de facto rule of Lij Iyasu, and the region almost became uninhabited. During the reorganization of the provinces in 1942, the former kingdom was enlarged by the addition of a number of other kingdoms from the Gibe region to become Kaffa Province.

In Kaffa, Maria Theresa thalers (MT) and salt blocks called amoleh were used as currency (as in the rest of Ethiopia) as late as 1905, which circulated at a rate of four or five amolehs to 1 MT. [9]

The economy was based on exports of gold, civet oil, and slaves. Crops grown included coffee and cotton. However, according to Richard Pankhurst, the amount of coffee exported was never large: he cites an estimate for its production in the 1880s at 50,000 to 60,000 kilograms a year. [10] Livestock was raised, and honeybees kept in barrels (called gendo) which were hung in trees. [11]

Bale is the name of two former polities located in the southeastern part of modern Ethiopia.

Sarsa Dengel was nəgusä nägäst (1563–1597) of Ethiopia, and a member of the Solomonic dynasty. 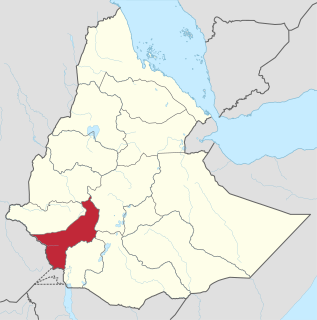 Kaffa (Kefa) was a province on the southwestern side of Ethiopia; its capital city was Jimma. It was named after the former Kingdom of Kaffa. The etymology of Kaffa is thought to be from the Arabic qahwah meaning "a drink from berries". The English word coffee is derived from the same root. 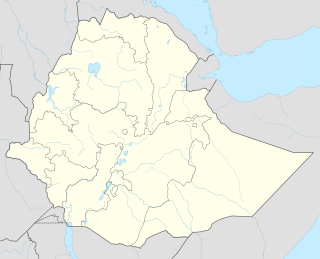 Bonga is a town and separate woreda in south-western Ethiopia. Located southwest of Jimma in the Keffa Zone of the Southern Nations, Nationalities and Peoples Region upon a hill in the upper Barta valley, it has a latitude and longitude of 7°16′N36°14′E with an elevation of 1,714 meters above sea level. It is surrounded by Ginbo woreda. Bonga is the administrative center of the Keffa Zone, with a major market on Saturday and lesser ones on Tuesdays and Thursdays. Note that there is another town in Ethiopia named "Bonga", near Gambela.

MotiAbba Jifar II was King of the Gibe Kingdom of Jimma. 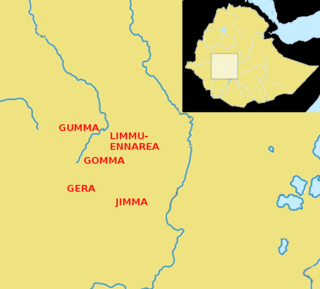 The Kingdom of Jimma was one of the kingdoms in the Gibe region of Ethiopia that emerged in the 19th century. It shared its western border with Limmu-Ennarea, its eastern border with the Sidamo Kingdom of Janjero, and was separated from the Kingdom of Kaffa to the south by the Gojeb River. Jimma was considered the most powerful militarily of the Gibe kingdoms. Dawro, an Ometo dialect, was the native language; it later slowly gave way to Oromo.

The Gibe region is used to indicate a historic region in modern southwestern Ethiopia, to the west of the Gibe and Omo Rivers, and north of the Gojeb. It was the location of the former Oromo and Sidama kingdoms of Gera, Gomma, Garo, Gumma, Jimma, and Limmu-Ennarea.

The Kingdom of Gomma was one of the kingdoms in the Gibe region of Ethiopia that emerged in the 18th century. It was based in Agaro.

The Kingdom of Garo, also known as Bosha after its ruling dynasty, was an ancient kingdom in the Horn of Africa. Established by the mecha oromo, it was situated on the periphery of the Gibe region. The garo oromo was named from the word (gaara) means "the upper site", the place where they were living at that time.

The Kingdom of Janjero was a tiny kingdom located in what is now Ethiopia. It lay in the angle formed by the Omo and the Jimma Gibe Rivers; to the west lay the Kingdom of Jimma and to the south the Kingdom of Garo. Three mountains — Mount Bor Ama, Mount Azulu and Mount Toba — all distinguish the location of the former kingdom. 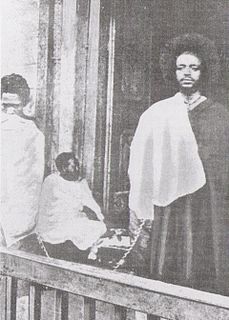 Gaki Sherocho was the last king of the Kingdom of Kaffa in what is now Ethiopia. He is usually called by the Kaffa "Chinito", the diminutive of Taten Chini.

AbbaBahrey was a late 16th-century Ethiopian monk, historian, and ethnographer, from the southern region of Gamo. He is best known for his 1593 work on the history of the Oromo and their migrations in the 16th century, the "History of the Galla". This short work is considered the ultimate source for information on the sixteenth century history of the Oromo: Manuel de Almeida borrowed heavily from Bahrey in writing his history of Ethiopia, and Hiob Ludolf derived much of his information on the Oromo from Baltazar Téllez's abridgment of Almeida's work.

Ginbo is one of the woredas in the Southern Nations, Nationalities, and Peoples' Region of Ethiopia. The name Ginbo comes from one of the provinces in the former Kingdom of Kaffa. That province, as well as the Kafficho provinces Bonga and Manjo, became districts with the Ethiopian conquest in 1896, and these districts were later merged to form the modern woreda. 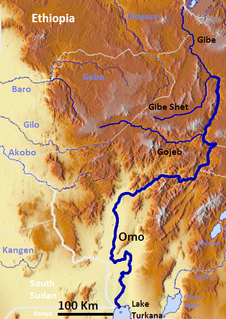 The Gibe River is by far the largest tributary of the Omo River in Ethiopia and typically flowing south / southeast. The confluence of the large Gibe River at 8°19′N37°28′E with the smaller Wabe River forms the even larger Omo River. Consequently, the whole drainage basin is sometimes called Omo-Gibe River Basin with the Gibe and the Omo draining the upper and lower reaches, respectively.

Slavery in Ethiopia existed for centuries. The practice formed an integral part of Ethiopian society, from its earliest days and ended in 1936 and 1942. Slaves were traditionally drawn from the Nilotic groups inhabiting Ethiopia's southern hinterland as well as Omotic groups. War captives were another source of slaves, though the perception, treatment and duties of these prisoners was markedly different. Although religious law banned Christian slave masters from taking part in the slave trade, many Muslim Oromo slave traders took part in the Arab slave trade. Slaves usually served as concubines, bodyguards, servants and treasurers.

The Great Oromo migrations, also known as the Oromo migrations, were a series of expansions in the 16th and the 17th centuries by the Oromo people from southern Ethiopia, namely the contemporary Borana and Guji zones, into more northerly regions of Ethiopia. The expansion had a profound impact on subsequent historical events occurring in Ethiopia. 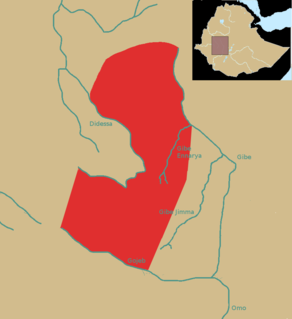 Ennarea, also known as E(n)narya or In(n)arya, was a kingdom in the Gibe region in what is now western Ethiopia. It became independent from the kingdom of Damot in the 14th century and would be the most powerful kingdom in the region until its decline in the 17th century. Being located on the southwestern periphery of the Ethiopian Empire, Ennarea was its tributary throughout much of its history, supplying the emperor with gold and slaves. The culmination of this relationship was the Christianization of the Ennarean elite in the late 1580s. From the late 16th century the kingdom came under increasing pressure by the Oromo, who finally conquered Ennarea in around 1710.