The Knights of Pythias is a fraternal organization and secret society [1] founded in Washington, D.C., on February 19, 1864. The Knights of Pythias is the first fraternal organization to receive a charter under an act of the United States Congress. [lower-alpha 2] It was founded by Justus H. Rathbone, who had been inspired by a play by the Irish poet John Banim about the legend of Damon and Pythias. This legend illustrates the ideals of loyalty, honor, and friendship that are the center of the order.

The order had over 2,000 lodges in the United States and around the world, with a total membership of over 50,000 in 2003. Some lodges meet in structures referred to as Pythian Castles.

The structure of the Knights of Pythias is three-tiered. The local units are called "Subordinate Lodges." State and provincial organizations are called "Grand Lodges" and the national structure is called the "Supreme Lodge" and meets in convention biennially. The officers of the Supreme Lodge include the sitting Past Supreme Chancellor, Chancellor, Vice-Chancellor, Prelate, Secretary, Treasurer, Master at Arms, Inner Guard and Outer Guard. [2] : 186

The order's auxiliaries are the Pythian Sisters, the Dramatic Order of the Knights of Khorassan, [2] : 184  and the Nomads of Avrudaka. [3]

Membership has historically been open to males in good health who believe in a Supreme Being. Maimed individuals were not admitted until 1875. Members are accepted by blackball ballot. [2] : 184

A member must be at least 18 years of age, and must take the following oath:

I declare upon honor that I believe in a Supreme Being, that I am not a professional gambler, or unlawfully engaged in the wholesale or retail sale of intoxicating liquors or narcotics, and that I believe in the maintenance of the order and the upholding of constituted authority in the government in which I live. Moreover, I declare upon honor that I am not a Communist or Fascist; that I do not advocate nor am I a member of any organization that advocates the overthrow of the Government of the Country of which I am a Citizen, by force or violence or other unlawful means; and that I do not seek by force or violence to deny to other persons their rights under the laws of such country. [4]

The ranks of Pythian Knighthood in a subordinate lodge (or "Castle") are:

In 1877, the order adopted an optional rank, called the Endowment Rank, which provided fraternal insurance benefits. In 1930, this department split from the Knights of Pythias and became a mutual life insurance company, later known as the "American United Insurance Company". [2] : 185

Finally, members who obtained the rank of Knight were eligible to join the now-defunct Uniform Rank, which participated in parades and other processions. [2] : 184

Early in the group's history, when a man was inducted into the Knights of Pythias, he received a ceremonial sword. [5] Such a sword might be given to a Pythian by family members, business associates, or others as a token of esteem.

Markings on swords varied widely. Most swords were inscribed with the initials "FCB", which stand for the Pythian motto ("Friendship, Charity, Benevolence"). Images on swords were also somewhat common, and included: A man, woman, and child (symbolic of Damon saying good-bye to his family); a man looking out of a building, with a group of people below (symbolic of Pythias' pending execution); a man (Samson) between some pillars, pulling them down, or various types of weapons (swords, axes, hammers, etc.). A full Knight of the Pythian order often inscribed his sword with the image of a knight's helmet with a lion on the crest. Many also carried the image of a sprig of myrtle (the Pythian symbol of love) or a falcon (the Pythian symbol of vigilance).

Swords owned by a member of the Uniformed Rank might be inscribed with the initials "UR," a dove, or a lily.

The order provides for "worthy Pythians in distress" and has given aid to victims of national or sectional disasters. It runs camps for underprivileged youth and homes for aged members. It has sponsored scholarship funds, blood drives, highway safety programs, and the Cystic Fibrosis Research Foundation. [2] : 185

Knights of Pythias of North and South America, Europe, Asia, and Africa

After a black lodge was denied a charter by the Knights of Pythias' Supreme Lodge meeting in Richmond, Virginia on March 8, 1869, a number of black Americans who had been initiated into the order formed their own Pythian group, the Knights of Pythias of North and South America, Europe, Asia, and Africa. By 1897, the KPNSAEAA had 40,000 members, with Grand Lodges in 20 states and other lodges in the West Indies and Central America. It distributed US$ 60,000 worth of benefits annually and had a woman's auxiliary and uniformed rank. [6] : 266

The Grand Lodge of Ontario was instituted on April 8, 1872. Rowena L. Rooks composed "K of P grand march [for piano]," which was dedicated to Collin H. Rose, Grand Chancellor, and the officers and representatives of the Grand Lodge K of P of Ontario, Canada. The march sheet music, which was published in London, Ontario, by C. F. Colwell, c. 1876, was illustrated with the Knights of Pythias emblem and Latin motto Amico Fidus ad Aras or, in English, "True friends are a refuge". [7]

In 1892, the Supreme Lodge ruled that the work of the order would only be conducted in English. This upset some members who were accustomed to using German. After this ruling was reiterated at the Supreme Lodges of 1894 and 1895, a number of German-speaking Pythians split off and formed the Improved Order, Knights of Pythias at a convention in Indianapolis in June 1895. The new order was reportedly not very popular, and a movement toward reconciliation occurred a few years later. [6] : 238

(by state then city)

The Knights are mentioned in Sunshine Sketches of a Little Town by Stephen Leacock; an ill-fated marine excursion organised by the Knights is the subject of Chapter 3, entitled "The Marine Excursion of the Knights of Pythias". Several characters in the book are said to be members of the Knights. [54]

In the Marx Brothers movie Animal Crackers, Groucho, as the character Captain Spaulding, reports on his recent big game hunting trip to Africa. He says, "The principal animals in Africa are moose, elks, and Knights of Pythias." [55]

The Pythian Home of Missouri, also known as Pythian Castle, in Springfield, Missouri, was built in 1913 by the Knights of Pythias and later owned by the U.S. military. German and Italian prisoners-of-war were assigned here during World War II for medical treatment and as laborers. Some prisoners were kept in the detached powerhouse and laundry room behind the castle. The laundry room is still owned by the U.S. Army.

A Pythian Castle was a local meeting place of the Knights of Pythias. It may refer to one of the following :

The Martin Luther King Jr. Performing and Cultural Arts Complex is a historic building in the King-Lincoln Bronzeville neighborhood of Columbus, Ohio. It was built in 1925 as the Pythian Temple and James Pythian Theater, and was added to the National Register of Historic Places and Columbus Register of Historic Properties in 1983. The building was renovated into the King Arts Complex in 1987, and was vacated in 2019. Community leaders restored the building's use as an arts center in 2021. 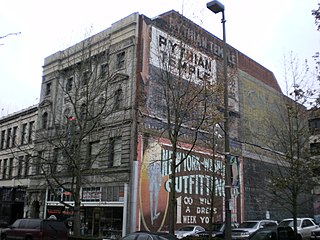 The Pythian Temple, built in 1906 for Commencement Lodge Number 7 of the Knights of Pythias, is an historic building located on Broadway in the Theater District of Tacoma, Washington. It was designed by noted Tacoma architect Frederick Heath.

The Knights of Pythias Building is an historic three-story redbrick Knights of Pythias building located at 315 Main Street in Fort Worth, Texas. Also known as the Knights of Pythias Castle Hall, it was built in 1901 on the site of an 1881 structure, the first Pythian Castle Hall ever built, which had burned earlier the same year. The building housed the city's first offset printing press and coin-operated laundry. On April 28, 1970, it was added to the National Register of Historic Places. The building is also a Recorded Texas Historic Landmark (RTHL). In 1981, it was restored and is now part of the Sundance Square area of downtown Fort Worth. The lead tenant in the building today is Haltom's Jewelers.

The Pythian Castle is a historic 3-story brick and stone Knights of Pythias building located at 610-612 Court Street in Portsmouth, Virginia. Built between 1897 and 1898 for the Atlantic Lodge, Knights of Pythias, it was designed by architect Edward Overman in the Romanesque Revival style of architecture. Like many multistory urban fraternal buildings built in the late 19th and early 20th centuries, its street floor was rented out for retail and office spaces while the upper floors were reserved for lodge use. In 1908 a single-story brick and stone Romanesque Revival addition was built to the north of the original building. In 1979 the Pythian Castle was sold by the knights. On October 30, 1980, it was added to the National Register of Historic Places. Today the ground floor is a Mexican eatery. 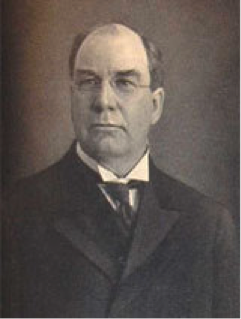 Frederick Heath was an American architect responsible for numerous projects in Tacoma, Washington. He worked out of his own office and as a senior partner at architectural firms. He was involved with Spaulding, Russell & Heath, and Heath & Gove. His work included designs for several historic and notable schools, churches, stadiums, and commercial properties.

The Masonic Temple is a historic Masonic temple in the village of Mechanicsburg, Ohio, United States. Built in the 1900s for a local Masonic lodge that had previously met in a succession of buildings owned by others, it is the last extant Mechanicsburg building constructed for a secret society, whether Masonic or otherwise, and it has been designated a historic site because of its well-preserved American Craftsman architecture.

The Highlands Masonic Lodge, also known as the Pythian Building, is a historic building located in Denver, Colorado. Built in 1905 and constructed in the Classical Revival style, it was listed on the National Register of Historic Places in 1995.

The Knights of Pythias Lodge Hall, also known as Pythian Castle, in Weiser, Idaho is a building built in 1904. It was listed on the National Register of Historic Places in 1976. 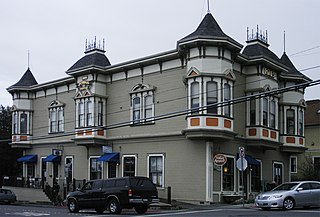 The Pythian Castle is a building in Arcata, northwestern California, that was built during 1884-85 for the North Star chapter of the Knights of Pythias fraternal order. It is notable for its commercial Queen Anne style architecture which features five projecting towers: two square towers projecting from the center of the two street-fronting sides of the building, and three round towers projecting from the street-side corners. Patterned shingles covered the tower roofs in the past. The corner ones have "witch hat"-shaped tops and used to sport tall finials. The side ones once had cresting.

The Pythian Castle Lodge, also known as Crystal Palace, in Milwaukee, Wisconsin, United States, was built in 1927 by the Knights of Pythias, a fraternal organization. In 1988 it was listed on the National Register of Historic Places.

The Eagle Harbor Schoolhouse is a school located at the corner of Third and Center Streets in Eagle Harbor, Michigan, United States. It is significant as the location where Justus H. Rathbone was first inspired to write the ritual which was the basis of the Order of the Knights of Pythias. The schoolhouse was designated a Michigan State Historic Site in 1971 and listed on the National Register of Historic Places in 1972. It is also known as the Pythian Shrine and as the Rathbone School.

The Pythian Sisters are the female auxiliary to the Knights of Pythias.

Rush, Endacott and Rush was an American architectural firm known for its designs in Tulsa, Oklahoma, from 1912 to 1929.

Wikimedia Commons has media related to Knights of Pythias .
This page is based on this Wikipedia article
Text is available under the CC BY-SA 4.0 license; additional terms may apply.
Images, videos and audio are available under their respective licenses.