Representatives are elected for two-year terms, elected during the fall elections. If a vacancy occurs in an Assembly seat between elections, it may be filled only by a special election.

The Assembly chamber is located in the west wing of the Wisconsin State Capitol building, in Madison, Wisconsin.

On July 8, 2015 a case was filed with the U.S. District Court for the Western District of Wisconsin arguing that Wisconsin's 2011 state assembly map was unconstitutional partisan gerrymandering favoring the Republican-controlled legislature which discriminated against Democratic voters. This case became filed with the court as Whitford v Gill. [2] The case made it to the United States Supreme Court, which vacated and remanded the case. The Supreme Court held that the plaintiff challenging the state assembly map did not have standing to sue. In the Opinion of the Court, Chief Justice John Roberts stated that "[a] federal court is not 'a forum for generalized grievances," and the requirement of such a personal stake 'ensures that courts exercise power that is judicial in nature." Gill v. Whitford, 128 S.Ct. 1916 (2018). We enforce that requirement by insisting that a plaintiff [have] Article III standing..." Justice Kagan filed a concurring opinion, in which Justices Ginsburg, Breyer, and Sotomayor joined. Justice Thomas filed an opinion concurring in part and concurring in the judgment, in which Justice Gorsuch joined. [3]

In addition to their salaries, representatives outside Dane County may receive up to $88 per day in living expenses while in Madison on state business. Members of the Dane County delegation are allowed up to $44 per day in expenses. Each representative also receives $75 per month in "out-of-session" pay when the legislature is in session for three days or less. Over two years, each representative is allotted $12,000 to cover general office expenses, printing, postage and district mailings.

According to a 1960 study, at that time Assembly salaries and benefits were so low that in Milwaukee County, positions on the County Board of Supervisors and the Milwaukee Common Council were considered more desirable than seats in the Assembly, and an average of 23% of Milwaukee legislators did not seek re-election. This pattern was not seen to hold to the same extent in the rest of the state, where local offices tended to pay less well. [5]

Currently the list of Assembly Committees [6] is quite lengthy. 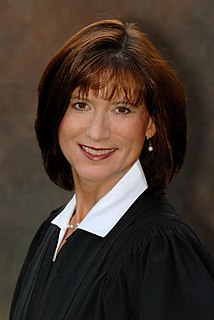 Diane Schwerm Sykes is the Chief United States Circuit Judge of the United States Court of Appeals for the Seventh Circuit and former Justice of the Wisconsin Supreme Court.

The Milwaukee County Board of Supervisors is the legislative branch of the government of Milwaukee County, Wisconsin, United States. Supervisors are elected to the board in nonpartisan elections. There are 18 supervisors. The county board has several committees and votes on issues involving the county, such as the budget.

Vieth v. Jubelirer, 541 U.S. 267 (2004), was a United States Supreme Court ruling that was significant in the area of partisan redistricting and political gerrymandering. The court, in a plurality decision by Justice Antonin Scalia and joined by Chief Justice William Rehnquist and Justices Sandra Day O'Connor and Clarence Thomas, with Justice Anthony Kennedy concurring in the judgment, upheld the ruling of the District Court in favor of the appellees that the alleged political gerrymandering was not unconstitutional.

N.Y. State Bd. of Elections v. Lopez Torres, 552 U.S. 196 (2008), was a case decided by the United States Supreme Court that involved a constitutional challenge brought against New York State's judicial election law, alleging that it unfairly prevented candidates from obtaining access to the ballot. The Supreme Court rejected this challenge and held that the state's election laws did not infringe upon candidates' First Amendment associational rights. Several concurring justices emphasized, however, that their decision reflected only the constitutionality of the state's election system, and not its wisdom or merit.

Taylor v. Beckham, 178 U.S. 548 (1900), was a case heard before the Supreme Court of the United States on April 30 and May 1, 1900, to decide the outcome of the disputed Kentucky gubernatorial election of 1899. The litigants were Republican gubernatorial candidate William S. Taylor and Democratic lieutenant gubernatorial candidate J. C. W. Beckham. In the November 7, 1899, election, Taylor received 193,714 votes to Democrat William Goebel's 191,331. This result was certified by a 2–1 decision of the state's Board of Elections. Goebel challenged the election results on the basis of alleged voting irregularities, and the Democrat-controlled Kentucky General Assembly formed a committee to investigate Goebel's claims. Goebel was shot on January 30, 1900, one day before the General Assembly approved the committee's report declaring enough Taylor votes invalid to swing the election to Goebel. As he lay dying of his wounds, Goebel was sworn into office on January 31, 1900. He died on February 3, 1900, and Beckham ascended to the governorship.

Edward Vernon Whiton was an American lawyer, jurist, and Wisconsin pioneer. He was the first elected Chief Justice of the Wisconsin Supreme Court.

Davis v. Mann, 377 U.S. 678 (1964), was a United States Supreme Court which was one of a series of cases decided in 1964 that ruled that state legislature districts had to be roughly equal in population. 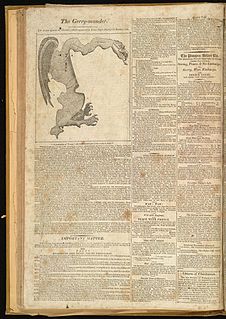 Gerrymandering in the United States has been used to increase the power of a political party. The term "gerrymandering" was coined by a review of Massachusetts's redistricting maps of 1812 set by Governor Elbridge Gerry that was named because one of the districts looked like a salamander.

Benisek v. Lamone, 585 U.S. ____ (2018), and Lamone v. Benisek, 588 U.S. ____ (2019) were cases before the Supreme Court of the United States dealing with the topic of partisan gerrymandering arising from the 2011 Democratic party-favored redistricting of Maryland. At the center of the cases was Maryland's 6th district which historically favored Republicans and which was redrawn in 2011 to shift the political majority to become Democratic via vote dilution. Affected voters filed suit, stating that the redistricting violated their right of representation under Article One, Section Two of the U.S. Constitution and freedom of association of the First Amendment.

Rucho v. Common Cause, No. 18-422, 588 U.S. ___ (2019), is a landmark case of the United States Supreme Court concerning partisan gerrymandering. The Court ruled that while partisan gerrymandering may be "incompatible with democratic principles", the federal courts cannot review such allegations, as they present nonjusticiable political questions outside the remit of these courts.

McPherson v. Blacker, 146 U.S. 1 (1892), was a United States Supreme Court case decided on October 17, 1892. The case concerned a law passed in Michigan which divided the state into separate congressional districts and awarded one of the state's electoral votes to the winner of each district. The suit was filed by several of these electors chosen in the 1892 election, including William McPherson, against Robert R. Blacker, the Secretary of State of Michigan. It was the first Supreme Court case to consider whether certain methods of states' appointments of their electors were constitutional. The Court, in a majority opinion authored by Chief Justice Melville Fuller, upheld Michigan's law, and more generally gave state legislatures plenary power over how they appointed their electors. The Court held that Article Two of the United States Constitution also constrains the ability of each state to limit the ability of its state legislators to decide how to appoint their electors.

Redistricting in North Carolina has been a controversial topic due to allegations and admissions of gerrymandering.

In direct response to election changes related to the COVID-19 pandemic and 2020 United States presidential election in Wisconsin; the Donald Trump 2020 presidential campaign launched numerous lawsuits contesting the election processes of Wisconsin. Most of these cases have been dismissed or dropped.