Legislative elections are held in November of every even-numbered year. [5] Both Assembly members and Senators serve two-year terms. [6]

The Assembly consists of 150 members; they are each chosen from a single-member district. The New York Constitution allows the number of Senate seats to vary; as of 2014, the Senate had 63 seats. [8]

The Assembly Speaker and Senate Majority Leader control the assignment of committees and leadership positions, along with control of the agenda in their chambers. The two are considered powerful statewide leaders and along with the Governor of New York control most of the agenda of state business in New York.[ citation needed ]

The Legislative Bill Drafting Commission (LBDC) aids in drafting legislation; advises as to the constitutionality, consistency or effect of proposed legislation; conducts research; and publishes and maintains the documents of the Legislature, such as the Laws of New York . [10] [11] The LBDC consists of two commissioners, the Commissioner for Administration and the Commissioner for Operations, each appointed jointly by the Temporary President of the Senate and the Speaker of the Assembly. [12]

The Legislature is empowered to make law, subject to the governor's power to veto a bill. However, the veto may be overridden by the Legislature if there is a two-thirds majority in favor of overriding in each House. Furthermore, it has the power to propose New York Constitution amendments by a majority vote, and then another majority vote following an election. If so proposed, the amendment becomes valid if agreed to by the voters at a referendum.[ citation needed ]

The legislature originated in the revolutionary New York Provincial Congress, assembled by rebels when the New York General Assembly would not send delegates to the Continental Congress.[ citation needed ]

The New York State Legislature has had several corruption scandals during its existence. These include the Black Horse Cavalry and Canal Ring. [16] [17]

In the 1840s, New York launched the first great wave of civil procedure reform in the United States by enacting the Field Code. The Code inspired similar reforms in 23 other states, and gave birth to the term "code pleading" for the system of civil procedure it created.[ citation needed ]

Five assemblymen were expelled in 1920 for belonging to the Socialist Party. [21]

There is said to be a compact to which members of the New York Legislature unofficially adhere a code of silence regarding behavior such as illicit extramarital affairs or other embarrassing behavior. [22] 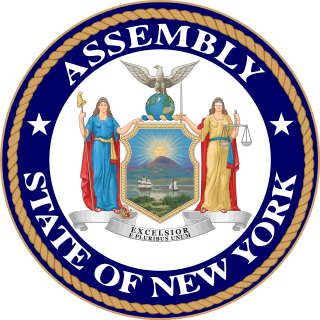 The Florida House of Representatives is the lower house of the Florida Legislature, the state legislature of the U.S. state of Florida, the Florida Senate being the upper house. Article III, Section 1 of the Constitution of Florida, adopted in 1968, defines the role of the Legislature and how it is to be constituted. The House is composed of 120 members, each elected from a single-member district with a population of approximately 157,000 residents. Legislative districts are drawn on the basis of population figures, provided by the federal decennial census. Representatives' terms begin immediately upon their election.

The New York State Democratic Committee is the affiliate of the Democratic Party in the U.S. state of New York. Its headquarters are in Manhattan, and it has an office in Albany. It is currently the dominant party in the state, controlling the majority of New York's U.S. House seats, both U.S. Senate seats, both houses of the state legislature, and the governorship.

The Government of the State of New York, headquartered at the New York State Capitol in Albany, encompasses the administrative structure of the U.S. state of New York, as established by the state's constitution. Analogously to the US federal government, it is composed of three branches: executive, legislative, and judicial. The head of the executive is the governor. The Legislature consists of the Senate and the Assembly. The Unified Court System consists of the Court of Appeals and lower courts. The state is also divided into counties, cities, towns, and villages, which are all municipal corporations with their own government. 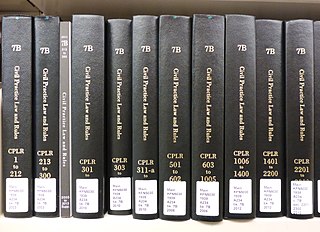 Laws of the State of New York are the session laws of the New York State Legislature published as an annual periodical, i.e., "chapter laws", bills that become law which have been assigned a chapter number in the office of the legislative secretary to the governor, and printed in chronological order. Laws are usually cited in the form of "Chapter X of the Laws of YYYY" or "L. YYYY, c. X", where X is the chapter number and YYYY is the year.

The New York Legislative Bill Drafting Commission (LBDC) aids the New York State Legislature in drafting legislation; advises as to the constitutionality, consistency or effect of proposed legislation; conducts research; and publishes and maintains the documents of the Legislature. It is composed of two commissioners.