The Assembly consists of 80 members, with each member representing at least 465,000 people. Due to a combination of the state's large population and relatively small legislature, the Assembly has the largest population-per-representative ratio of any state lower house and second largest of any legislative lower house in the United States after the federal House of Representatives.

Members of the California State Assembly are generally referred to using the titles Assemblyman (for men), Assemblywoman (for women), or Assemblymember (gender-neutral). In the current legislative session, Democrats enjoy a three-fourths supermajority of 60 seats, while Republicans control a minority of 19 seats and Independents hold 1 seat.

The Speaker presides over the State Assembly in the chief leadership position, controlling the flow of legislation and committee assignments. The Speaker is nominated by the caucus of the majority party and elected by the full Assembly. Other leaders, such as the majority and minority leaders, are elected by their respective party caucuses according to each party's strength in the chamber.

As a result of Proposition 140 in 1990 and Proposition 28 in 2012, members elected to the Legislature prior to 2012 are restricted by term limits to three two-year terms (six years), while those elected in or after 2012 are allowed to serve 12 years in the legislature in any combination of four-year State Senate or two-year State Assembly terms. [2]

The chamber's green tones are based on the House of Commons of the United Kingdom. The dais rests along a wall shaped like an "E", with its central projection housing the rostrum. Along the cornice appears a portrait of Abraham Lincoln and a Latin quotation: legislatorum est justas leges condere ("It is the duty of legislators to pass just laws"). Almost every decorating element is identical to the Senate Chamber.

To run for the Assembly, a candidate must be a United States citizen and a registered voter in the district at the time nomination papers are issued, and may not have served three terms in the State Assembly since November 6, 1990. According to Article 4, Section 2(c) of the California Constitution, the candidate must have one year of residency in the legislative district and California residency for three years. [3]

Since 2016, the chaplain and the alternate chaplain of the Assembly have been Revs. Patti Oshita and Bob Oshita, married couple and both Jodo Shinshu Buddhist spiritual leaders. The chaplain from 2003 to 2016 was Father Constantine Pappademos, a Greek Orthodox priest. [5]

The Chief Clerk, the acting Chief Sergeant-at-Arms, and the Chaplains are not members of the Legislature.

David Ellis Cogdill Sr. was a Republican politician who was the California State Senate Republican Leader, a post he held for 10 months from 2008 until he was replaced by State Senator Dennis Hollingsworth early in the morning on February 18, 2009 amidst a contentious mid-year budget debate. He served as a State Senator from California's 14th State Senate district for one term from December 2006 to December 2010.

The 2009–2010 session was a meeting of the California State Legislature.

The First Wisconsin Legislature convened from June 5, 1848, to August 21, 1848, in regular session. Members of the Assembly and Senate were elected after an election on February 1, 1848, that ratified the proposed state constitution. 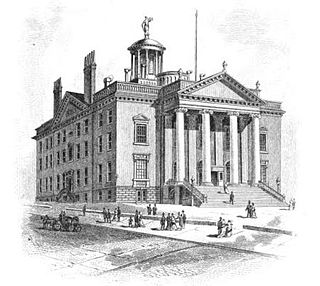 The 2019–20 session is the current session of the California State Legislature. The session first convened on December 3, 2018.