The Texas House of Representatives is the lower house of the bicameral Texas Legislature. It consists of 150 members who are elected from single-member districts for two-year terms. As of the 2010 Census, each member represents about 167,637 people. There are no term limits, with the most senior member, Tom Craddick, having been elected in 1968. The House meets at the State Capitol in Austin.

The Speaker of the House is the presiding officer and highest-ranking member of the House. The Speaker's duties include maintaining order within the House, recognizing members during debate, ruling on procedural matters, appointing members to the various committees and sending bills for committee review. The Speaker pro tempore is primarily a ceremonial position, but does, by long-standing tradition, preside over the House during its consideration of local and consent bills.

Unlike other state legislatures, the House rules do not formally recognize majority or minority leaders. The unofficial leaders are the Republican Caucus Chairman and the Democratic House Leader, both of whom are elected by their respective caucuses.

†Representative was first elected in a special election.

The Speaker of the House of Representatives has duties as a presiding officer as well as administrative duties. As a presiding officer, the Speaker must enforce, apply, and interpret the rules of the House, call House members to order, lay business in order before the House and receive propositions made by members, refer proposed legislation to a committee, preserve order and decorum, recognize people in the gallery, state and hold votes on questions, vote as a member of the House, decide on all questions to order, appoint the Speaker Pro Tempore and Temporary Chair, adjourn the House in the event of an emergency, postpone reconvening in the event of an emergency, and sign all bills, joint resolutions, and concurrent resolutions. The administrative duties of the Speaker include having control over the Hall of the House, appointing chair, vice-chair, and members to each standing committee, appointing all conference committees, and directing committees to make interim studies. [5]

The Chief Clerk is the head of the Chief Clerk's Office which maintains a record of all authors who sign legislation, maintains and distributes membership information to current house members, and forwards copies of legislation to house committee chairs. [6] The Chief Clerk is the primary custodian of all legal documents within House. Additional duties include keeping a record of all progress on a document, attesting all warrants, writs, and subpoenas, receiving and filing all documents received by the house, and maintaining the electronic information and calendar for documents. When there is a considerable update of the electronic source website, the Chief Clerk is also responsible for noticing House members via email. [5]

In addition to these committees, there are also six joint committees composed of members of both the State House and Senate:

On May 14, 2007, CBS Austin affiliate KEYE reported on multiple voting by representatives during House floor sessions. [8] The report noted how representatives register votes for absent members on the House's automated voting machines. Each representative would vote for the nearest absent members (apparently regardless of party affiliation). This practice was in direct violation of a Rule of the House; however, no representative had ever been disciplined for the practice in the almost 70 years since the rule was adopted. Speaker Craddick, responsible for enforcement of House Rules, issued a statement that discipline for violations of the rule is left to the individual members.

Chaos erupted in the Texas House of Representatives on Friday, May 25, 2007, when Rep. Fred Hill, R-Richardson, attempted to offer a motion to remove Tom Craddick as Speaker and have the House elect a new speaker. Craddick (also a Republican) refused to allow him to make the motion. [9] The attempts to oust Craddick continued through the weekend as other Republicans made additional motions, which were also disallowed.

The last time a Texas House speaker was removed by a vote of his fellow members was in 1871, when the House adopted a resolution removing Speaker Ira Evans. The Republican House majority removed Evans because he was seen as cooperating too much with Democrats on an elections bill. [9] While Craddick's close allies say the 2007 attempt to remove Craddick was just an effort by Democrats to gain greater control of the legislature before the legislative and congressional redistricting process of 2011, [9] Cook said that the fight was about Craddick consolidating power with lobbyists and using campaign contributions to maintain control of the House: "This is about the convergence of money and power and influence." [9]

In January 2009, Craddick lost the Speaker's chair after a challenge from Joe Straus.

On June 20, 2013 Byron Cook served as chairman of the House State Affairs Committee hearing on Texas State House Bill 60. Cook's stance was for the passing of the bill and during the hearing he interrupted a testimony, saying "Some of us do (adopt children)." At 12:00 AM on June 21, Cook decided to close the hearing prematurely. [10] Cook's explanation for breaching Texas State Legislature operating procedures was that the testimonies being heard had become repetitive. Twenty-four minutes later, Cook became personally offended by a testimony, ordering the cameras to be shut off and leaving the room of committee members and witnesses. Approximately 20 minutes afterwards, Cook was persuaded by colleagues to resume the hearing and continued listening to testimonies until he prematurely closed the hearing at 1:30 AM. [11]

The Maryland General Assembly is the state legislature of the U.S. state of Maryland that convenes within the State House in Annapolis. It is a bicameral body: the upper chamber, the Maryland State Senate, has 47 representatives and the lower chamber, the Maryland House of Delegates, has 141 representatives. Members of both houses serve four-year terms. Each house elects its own officers, judges the qualifications and election of its own members, establishes rules for the conduct of its business, and may punish or expel its own members.

The Florida House of Representatives is the lower house of the Florida Legislature, the state legislature of the U.S. state of Florida, the Florida Senate being the upper house. Article III, Section 1 of the Constitution of Florida, adopted in 1968, defines the role of the Legislature and how it is to be constituted. The House is composed of 120 members, each elected from a single-member district with a population of approximately 157,000 residents. Legislative districts are drawn on the basis of population figures, provided by the federal decennial census. Representatives' terms begin immediately, upon their election. As of 2019, Republicans hold the majority in the State House with 73 seats; Democrats are in the minority with 46 seats. One seat is vacant.

The Michigan House of Representatives is the lower house of the Michigan Legislature. There are 110 members, each of whom is elected from constituencies having approximately 77,000 to 91,000 residents, based on population figures from the 2010 U.S. Census. Its composition, powers, and duties are established in Article IV of the Michigan Constitution. 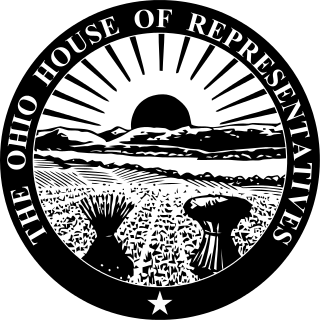 Thomas Russell Craddick Sr., known as Tom Craddick, is member of the Texas House of Representatives representing the 82nd district. Craddick was Speaker of the Texas House of Representatives from January 2003 to January 2009. He was the first Republican to have served as Speaker since Reconstruction. Craddick resides in Midland, the largest city in his district. Craddick was first elected in 1968 at the age of twenty-five. By 2012, he was already the longest-serving member of the Texas state legislature and the second-longest-serving representative in the history of the state. In the general election held on November 6, 2018, Craddick won his 26th term in the legislature. With 37,504 votes, he defeated the Democratic candidate, Spencer Bounds, who polled 9,207 votes. In this same election, Craddick's daughter, Christi Craddick, won her second term as a Republican member of the Texas Railroad Commission.

James Earl Laney, known as Pete Laney, is a U. S. Democratic Party politician from West Texas. He was a member of the Texas House of Representatives from 1973 to 2007. A resident of Hale Center, near Plainview in Hale County, Laney served as House Speaker from 1993 to 2003.

The Legislature of the State of Oklahoma is the state legislative branch of the U.S. state of Oklahoma. The Oklahoma House of Representatives and Oklahoma Senate are the two houses that make up the bicameral state legislature. There are 101 state representatives, each serving a two-year term, and 48 state senators, who serve four-year terms that are staggered so only half of the Oklahoma Senate districts are eligible in each election year. Legislators are elected directly by the people from single member districts of equal population. The Oklahoma Legislature meets annually in the Oklahoma State Capitol in Oklahoma City. 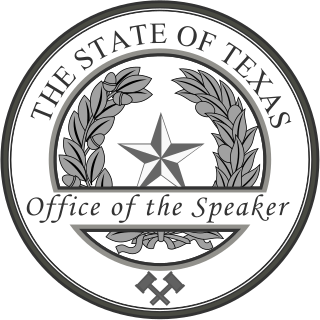 Warren Darrel Chisum is a conservative Republican former member of the Texas House of Representatives from the Panhandle city of Pampa, a community of some 20,000 people and the seat of Gray County, Texas. His service began in January 1989. A key lieutenant of former Speaker Tom Craddick, of Midland, Chisum chaired the budget-writing House Appropriations Committee from 2007 to 2009.

The Louisiana House of Representatives is the lower house in the Louisiana State Legislature, the state legislature of the US state of Louisiana. The House is composed of 105 representatives, each of whom represents approximately 42,500 people. Members serve four-year terms with a term limit of three terms. The House is one of the five state legislative lower houses that has a four-year term, as opposed to the near-universal two-year term.

James R. Pitts, known as Jim Pitts, is an American state politician and lawyer who served in the Texas House of Representatives from 1993 to 2015. He was the chairman of the powerful House Appropriations Committee for four legislative sessions. He is a Republican from Waxahachie in Ellis County, south of his native Dallas, Texas.

In disciplinary procedures, the motion to declare the chair vacant is used as a remedy to misconduct or dereliction of duty by the Chairperson of a deliberative assembly, when the rules allow it. It is usually combined with a motion to elect a new chair.

Joseph Richard Straus III is an American politician who served as the Speaker of the Texas House of Representatives from 2009 to 2019. He is a Republican and represented District 121, which comprises northeastern Bexar County, including part of San Antonio, Texas, and several surrounding communities from his first election to the House in 2005 until his retirement in 2019. Straus was first elected Speaker on January 13, 2009. In October 2017, Straus announced that he would not seek re-election in 2018.

Burt Rowe Solomons is an attorney from North Carrollton, Texas, who was from 1995 to 2013 a Republican member of the Texas House of Representatives from District 65 in suburban southeastern Denton County.