Kingsville is a city in the southern region of the U.S. state of Texas and the county seat of Kleberg County. Located on the U.S. Route 77 corridor between Corpus Christi and Harlingen, Kingsville is the principal city of the Kingsville Micropolitan Statistical Area, which is part of the larger Corpus Christi-Kingsville Combined Statistical Area. The population was 26,213 at the 2010 census, and in 2018 the U.S. Census Bureau estimated the population at 25,487. [3]

Named in honor of Richard King, Kingsville's first buildings were constructed in 1904 along the newly completed, now defunct, St. Louis, Brownsville and Mexico Railway line, adjacent to the famous King Ranch. The city was incorporated in 1913. [4] It is home to Texas A&M University-Kingsville, a member of the Texas A&M University System, and Naval Air Station Kingsville, one of the U.S. Navy’s two locations for jet aviation training.

With the continued growth of the King Ranch in the mid to late 19th century, the desire for a railroad through the region increased, both to connect the communities of the Rio Grande Valley to the rest of Texas, and to serve the King Ranch. At the turn of the 20th century, Henrietta King deeded a portion of the ranch to entice the construction of a town and to bring the railroad adjacent to the ranch. [4] Robert Justus Kleberg, Jr., the ranch manager, formed the Kleberg Town and Improvement Company in 1903, tasked with planning and constructing the town. [4] In 1904, the community was planned three miles from the King Ranch headquarters and was named in honor of the founder of the King Ranch, Richard King. That same year, construction of the St. Louis, Brownsville and Mexico Railway reached Kingsville, and the first train passed through the town on July 4, 1904, considered the founding date of the city. Kingsville's first post office was also established that year. [5]

In 1911, the city was incorporated and the first city government was established. Two years later, in 1913, Kingsville was named the county seat of the newly established Kleberg County. [4] Around 1920, oil and natural gas were discovered near Kingsville, leading to the city's first population boom. [6] In 1925, the South Texas Teachers College opened, later changing its name in 1929 to the Texas College of Arts and Industries (Texas A&I). The school went on to adopt its current name, Texas A&M University-Kingsville when it joined in the Texas A&M University System in 1993. [4] In 1942, the U.S. Navy opened a training airfield, Naval Air Station Kingsville to the east of town, which after a brief period of closure following World War II, has remained open to this day and is one of two major Naval Aviation jet training facilities for the Navy. [6]

Several major industries have called Kingsville home throughout the city's history. In 1944, the Celanese Corporation opened a plant north of Kingsville that is still in operation today. [4] In the early 1960s, Humble Oil and Refining Company, now known as Exxon, relocated a district office to Kingsville due to the city's close proximity to nearby oil fields. [4] Population steadily increased in Kingsville, peaking at just under 30,000 residents in the mid 1980s. [6] Since that time, the city has experienced an mild economic slump, with the closing of Exxon's district office, decreased enrollment at the university, and the decreased economic impact of the petroleum industry all cited as factors for the city's decline. [4]

Kingsville is located in South Texas, approximately 33 miles (54 km) southwest of Corpus Christi, 91 miles (146 km) north of Harlingen and 101 miles (163 km) east of Laredo. According to the United States Census Bureau, in 2010, the city has a total area of 13.9 square miles (36 km2), of which 13.8 square miles (36 km2) is land and 0.04 square miles (0.10 km2) (0.22%) is water. Kingsville is located in the geographic Gulf Coastal Plain region of the United States, known as the Coastal Bend in Texas, bordered by the Gulf of Mexico and Baffin Bay to the east, and the South Texas Plains or brush country to the north, west and south. Mesquite trees are found throughout the region, along with several types of cacti. The city is surrounded by farmland producing various crops including cotton and sorghum. The terrain around Kingsville is generally flat, with an elevation of 59 feet above sea level at city center. Several creeks run through the city, including the San Fernando, Santa Gertrudis, and Escondido Creeks, all feeding into Baffin Bay.

The racial makeup of the city was 83.3 percent White, 4.7 percent African American, 2.8 percent Asian, 0.6 percent Native American, 0.1 percent Pacific Islander, 6.8 percent from other races, and 1.7 percent from two or more races. [8] Hispanics or Latinos of any race made up 72.4 percent of the population. [8]

The climate in this area is characterized by hot, humid summers and generally mild to cool winters. According to the Köppen Climate Classification system, Kingsville has a humid subtropical climate, abbreviated "Cfa" on climate maps. [12] 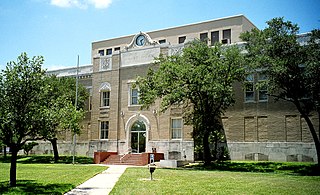 Nueces County is a county in the U.S. state of Texas. As of the 2010 census, the population was 340,223. The county seat is Corpus Christi. The county was formed in 1846 from portions of San Patricio County and organized the following year. It is named for the Nueces River, which flows through the county. Nueces County is part of the Corpus Christi, TX Metropolitan Statistical Area. 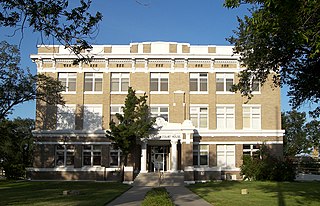 Not to be confused with Kleberg, Texas.

Kenedy County is a county located in the U.S. state of Texas. As of the 2010 census, its population was 416. It is the third-least populous county in Texas and fourth-least populous in the United States. Its county seat is Sarita. The county was created in 1921 from parts of Hidalgo and Willacy counties and is named for Mifflin Kenedy, an early area rancher and steamboat operator.

Aransas County is a county located in the U.S. state of Texas. As of the 2010 census, the population was 23,158. Its county seat is Rockport. The county was formed in 1871 from Refugio County and organized the following year. It was named for the Rio Nuestra Senora de Aranzazu, a Spanish outpost in early Texas. 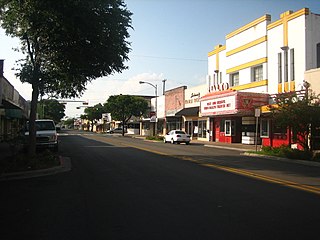 Beeville is a city in Bee County, Texas, United States, with a population of 12,863 at the 2010 census. It is the county seat of Bee County and home to the main campus of Coastal Bend College. The area around the city contains three prisons operated by the Texas Department of Criminal Justice.

Alice is a city in, and the county seat of, Jim Wells County, Texas, United States, in the South Texas region of the state. The population was 19,104 at the 2010 census. Alice was established in 1888. First it was called "Bandana", then "Kleberg", and finally "Alice" after Alice Gertrudis King Kleberg, the daughter of Richard King, who established the King Ranch. 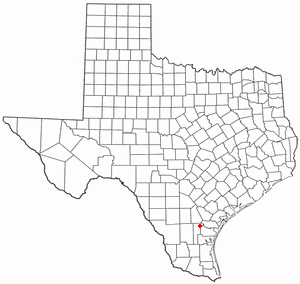 Orange Grove is a city in Jim Wells County, Texas, United States. The population was 1,318 at the 2010 census.

Corpus Christi, colloquially Corpus, is a coastal city in the South Texas region of the U.S. state of Texas. The county seat of Nueces County, it also extends into Aransas, Kleberg, and San Patricio Counties. It is 130 miles southeast of San Antonio. Its political boundaries encompass Nueces Bay and Corpus Christi Bay. Its zoned boundaries include small land parcels or water inlets of three neighboring counties.

Sarita is a census-designated place (CDP) in, and the county seat of Kenedy County, Texas, United States. It is the only settlement of note in the county, and as of the 2010 census had a population of 238. Sarita has been ranked the most politically liberal town in Texas.

King Ranch, located in South Texas between Corpus Christi and Brownsville near Kingsville, is the largest ranch in Texas, an area larger than the state of Rhode Island. The King Ranch comprises 825,000 acres and was founded in 1853 by Captain Richard King and Gideon K. Lewis. It includes portions of six Texas counties; most of Kleberg County and much of Kenedy County, with portions extending into Brooks, Jim Wells, Nueces, and Willacy counties. The ranch does not consist of one single contiguous plot of land, but rather four large sections called divisions. The divisions are the Santa Gertrudis, the Laureles, the Encino and the Norias. Only the first two of the four divisions border each other, and that border is relatively short. The ranch was designated a National Historic Landmark in 1961. The Texas Cowboy Hall of Fame inducted the ranch in 2019.

Richard King was a riverboat captain, confederate, entrepreneur, and most notably, the founder of the King Ranch in South Texas, which at the time of his death in 1885 encompassed over 825,000 acres (3,340 km2).

Riviera is a census-designated place and unincorporated community in Kleberg County, Texas, United States. As of the 2010 census it had a population of 689. It is located 15 miles (24 km) south of Kingsville on U.S. Route 77 and 22 miles (35 km) northeast of Falfurrias on Texas State Highway 285. 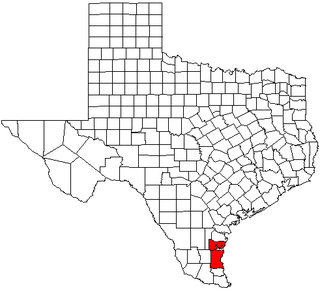 The Kingsville Micropolitan Statistical Area is a micropolitan area in South Texas that covers two counties – Kleberg and Kenedy. As of the 2000 census, the μSA had a population of 31,963. It is also part of the larger Corpus Christi-Kingsville Combined Statistical Area. 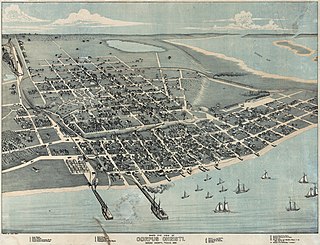 Corpus Christi is a coastal city in the South Texas region of the U.S. state of Texas. The county seat of Nueces County, it also extends into Aransas, Kleberg, and San Patricio counties. The population was 277,454 at the 2000 census; in 2006 the U.S. Census Bureau estimated the city's population at 285,175, making it the eighth-largest city in the state. It is the principal city of the three-county Corpus Christi Metropolitan Statistical Area as well as the larger Corpus Christi-Kingsville Combined Statistical Area. The translation from Latin of the city's name is Body of Christ, given to the settlement by the Spanish, in honor of the Blessed Sacrament (Eucharist). The city has been nicknamed The Sparkling City by the Sea, or "Corpitos" particularly in literature promoting tourism.

Jose Manuel Lozano, Jr., known as J. M. Lozano, is a Republican member of the Texas House of Representatives for District 43, which consists of the counties of Bee, Jim Wells, Kleberg, and San Patricio. He serves as chairman of the House Committee on Redistricting and vice-chair of the Committee on International Trade. A restaurateur, Lozano lives in Kingsville in Kleberg County with his wife, Avelina, and their three children.