Belton is a city in the U.S. state of Texas, within the Killeen-Temple metropolitan area. The city is on the Interstate 35 corridor between Austin and Waco and is the seat of Bell County.The population was 21,734 in 2017 according to a US Census Estimate. [3] As of 2015 [update] the metro region had a population of 450,051. [4]

Belton and Bell County have been the site of human habitation since at least 6000 BC. Evidence of early inhabitants, including campsites, kitchen middens and burial mounds from the late prehistoric era have been discovered in the Stillhouse Hollow Lake and Belton Lake areas. The earliest inhabitants were the Tonkawa, who traditionally followed buffalo by foot. Belton was also home to the Lipan Apache, Wacos, Nadaco, Kiowas and Comanche. By the 1840s most tribes had been pushed out by settlements, but skirmishes with the Commanches existed until the early 1870s. [5]

Belton was first settled 1850 and named Nolanville, taking the name of nearby Nolan Springs which were named for Texan explorer Philip Nolan. In 1851, it changed its name to Belton after being named the county seat of newly created Bell County named after Texas' governor, Peter Hansborough Bell. In 1860, the population was 300, the largest in the county. During the run up to the civil war, Belton had a large pro-Union minority. A Whig Party paper and anti-secession paper called "The Independent" was published there and the city voted overwhelmingly for Sam Houston for governor, who was strongly against Texas secession. [6] Nonetheless, in 1861 Bell County voted for secession and many residents fought in the Confederate Army. After the civil war, Belton experienced unrest. Several pro-union sympathizers were lynched in 1866 and Federal troops were called in to protect the Federal Judge serving in the city. After reconstruction, the city, close to a major feeder of the Chisholm Trail, served as growing business center for the region.

In 1868, Martha McWhirter, a prominent figure in Belton's non-sectarian Union Sunday School, created the Woman's Commonwealth, the only Texas women's commune of the 1800s. The commune started several business ventures including a successful hotel. In 1899, the group sold their holdings and relocated to Maryland. [7] The town experienced rapid growth in the 1880s with the building of the courthouse, Baylor Female College buildings, and a "railroad war" in which, by 1881, Belton was bypassed by the railroad which built Temple as the local junction and depot town. In 1904, the town reported a population of 3,700. The town began to thrive and reached a population of 6,500 in 1928. However the town was decimated by the Great Depression and was down to a population of 3,779 only three years later in 1931. [8]

It is bordered to the northeast by the Leon River, across which is the city of Temple. Nolan Creek, a tributary of the Leon, runs through the center of Belton. It is also southeast of Belton Lake and northeast of Stillhouse Hollow Lake with both touching its city limits. The city limits extend south along Interstate 35 across the Lampasas River nearly to Salado. And abuts Temple City limits at the Leon River

Belton has a humid subtropical climate under the Köppen climate classification. This climate is typified by hot and muggy summers, short mild winters, and pleasantly warm spring and fall seasons. Belton averages 35.2 inches (894 mm) of annual rainfall and it is distributed mostly evenly throughout the year.

Although severe weather can & does occur, typically during the Spring with supercell thunderstorms it does not fall within the conventional limits of tornado alley. [17]

There were 4,742 households out of which 37.3% had children under the age of 18 living with them, 49.9% were married couples living together, 16.1% had a female householder with no husband present, and 30.0% were non-families. 24.6% of all households were made up of individuals and 10.6% had someone living alone who was 65 years of age or older. The average household size was 2.69 and the average family size was 3.23.

Belton is served by the Belton Independent School District. The school district operates two high schools, three middle schools and nine elementary schools. The district and all of its campuses received the Texas Education Agency's highest accountability rating (met standard) based on student performance on the State of Texas Assessment of Academic Readiness. Both Belton High School & Belton New Tech High School have been included on lists of the nation's best high schools compiled by US News & World Report and Newsweek. Belton New Tech High School and South Belton Middle School have been recognized as Apple Distinguished Schools for their implementation of the district's digital learning initiative. The mascot for Belton ISD is the Tiger. [20]

Falling in Temple, TX city limits but within the boundaries of Belton Independent School District is Central Texas Christian School a private Christian k-12 school with an enrollment of approximately 570 students. [21]

Belton is home to the University of Mary Hardin–Baylor. Founded in 1845, it is a private Christian university affiliated with the Baptist General Convention of Texas. [22] [23] Awarding degrees at the baccalaureate, master's, and doctoral levels it has an enrollment of 3,898. [24]

There is also a water park, Summer Fun Water Park, which features slides, a lazy river, and other fun activities. Food may also be purchased both inside and in a building just out side of Summer Fun which serves assorted snacks.

Palo Pinto County is a county located in the U.S. state of Texas. As of the 2010 census, its population was 28,111. The county seat is Palo Pinto. The county was created in 1856 and organized the following year.

Hardin County is a county located in the U.S. state of Texas, United States. As of the 2010 census, its population was 54,635. The county seat is Kountze. The county is named for the family of William Hardin from Liberty County, Texas.

Comanche County is a county located on the Edwards Plateau in Central Texas. As of the 2010 census, its population was 13,974. The county seat is Comanche. The county was founded in 1856 and is named for the Comanche Native American tribe. 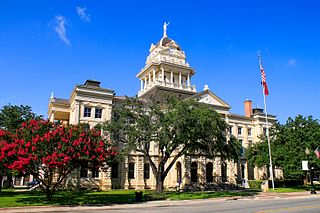 Bell County is a county located in the central part of the U.S. state of Texas. As of the 2010 census, its population was 310,235. Its county seat is Belton. The county was founded in 1850 and is named for Peter Hansborough Bell, the third governor of Texas.

Seymour is a city in and the county seat of Baylor County, Texas, United States. The population was 2,740 as of the 2010 Census. 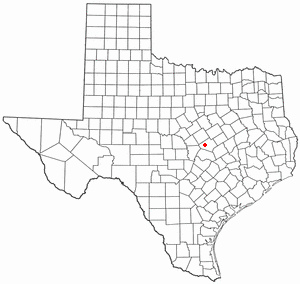 Harker Heights is a city in Bell County, Texas, United States. As of the 2010 census, 26,700 people resided in the city, up from a population of 17,308 in 2000. This makes Harker Heights the third-largest city in Bell County, after Killeen and Temple. Incorporated in 1960, the city derives its name from one of the two original landowners and founder, Harley Kern. Harker Heights is part of the Killeen – Temple – Fort Hood metropolitan area. People usually refer to the town as just "Heights". 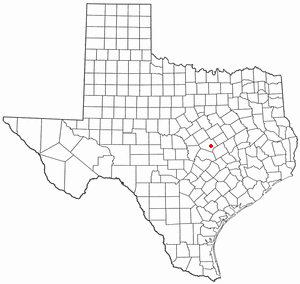 Little River-Academy is a city in Bell County, Texas, United States. The population was 1,961 at the 2010 census. It is part of the Killeen–Temple–Fort Hood Metropolitan Statistical Area.

Morgan's Point Resort is a city, or district of Belton Texas, in Bell County, Texas, United States. The population was 4,170 at the 2010 census. It is part of the Killeen–Temple–Fort Hood Metropolitan Statistical Area. It was incorporated in 1970. 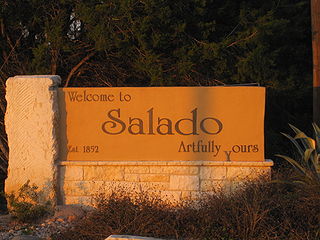 Salado is a town in Bell County, Texas, United States. Salado was first incorporated in 1867 for the sole purpose of building a bridge across Salado Creek. In 2000, the citizens of Salado voted in favor of reincorporation, before which it was a census-designated place. The population of the village was 2,126 at the 2010 census. It is part of the Killeen–Temple–Fort Hood Metropolitan Statistical Area. 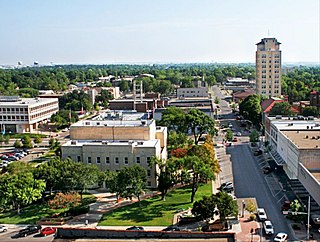 Temple is a city in Bell County, Texas, United States. As of 2018, the city has a population of 76,600 according to a US census estimate. 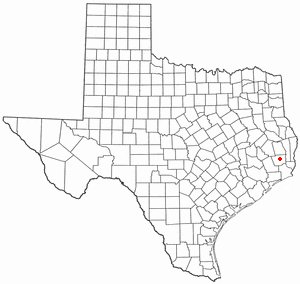 Kountze is a city in Hardin County, Texas, United States. The population was 2,123 at the 2010 census. It is the county seat of Hardin County. The city is part of the Beaumont–Port Arthur Metropolitan Statistical Area.

Sour Lake is a city in Hardin County, Texas, United States. The population was 1,813 at the 2010 census. It was originally named "Sour Lake Springs", after the sulphurous spring water that flowed into the nearby lake. The city is part of the Beaumont–Port Arthur Metropolitan Statistical Area. Sour Lake is the oldest surviving town in Hardin County. It is called by some the "Gateway to the Big Thicket". 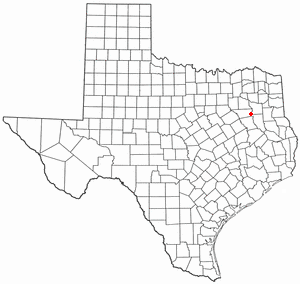 Coffee City is a small town in southeast Henderson County, Texas, United States. The population was 278 at the 2010 census, up from 193 at the 2000 census. 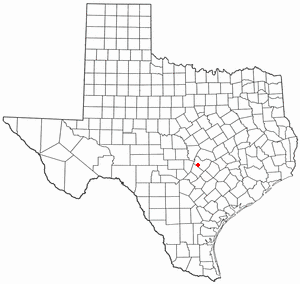 Bee Cave is a city located in Travis County, and within the United States state of Texas. The population was 3,925 as of the 2010 census. 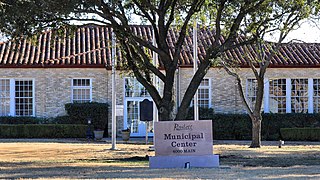 Rowlett is a city in Dallas and Rockwall counties in the U.S. state of Texas, and an eastern suburb of Dallas. The population was 66,285 as of the 2018 Census est. It is a growing, upscale community with nearly $1.5 billion in development in the Dallas–Fort Worth metroplex, located on Lake Ray Hubbard.

The Lampasas River (lam-PA-sis) is a river in the U.S. state of Texas. The river originates near the city of Hamilton and travels southeast for seventy-five miles through central Texas to a man-made reservoir called Stillhouse Hollow Lake. The river flows approximately 100 miles southeast through Lampasas, Burnet, and Bell Counties. It continues for a short distance after the lake to converge with the Leon River to form the Little River (Texas) near Belton.

The Little River is a river in Central Texas in the Brazos River watershed. It is formed by the confluence of the Leon River and the Lampasas River near Little River, Texas in Bell County. It flows generally southeast for 75 miles (121 km) until it empties into the Brazos River about 5 miles (8.0 km) southwest of Hearne, at a site called Port Sullivan in Milam County. The Little River has a third tributary, the San Gabriel River, which joins the Little about 8 miles (13 km) north of Rockdale and five miles southwest of Cameron. Cameron, the county seat of Milam County and the only city of any significant size on the Little River, was established in 1846. 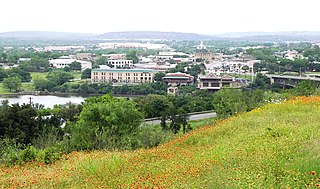