This article refers to crime in the American state of Texas. 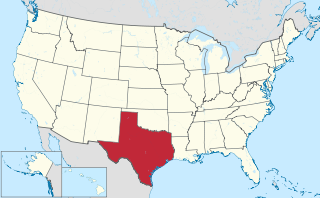 Capital punishment is applied under Texas state law for capital murder if the perpetrator is 2 years and older and the prosecutor seeks the death penalty. [3]

Capital punishment, also known as the death penalty, is a government-sanctioned practice whereby a person is killed by the state as a punishment for a crime. The sentence that someone be punished in such a manner is referred to as a death sentence, whereas the act of carrying out the sentence is known as an execution. Crimes that are punishable by death are known as capital crimes, capital offences or capital felonies, and they commonly include serious offences such as murder, mass murder, aggravated cases of rape, child rape, child sexual abuse, terrorism, treason, espionage, offences against the State, such as attempting to overthrow government, piracy, aircraft hijacking, drug trafficking and drug dealing, war crimes, crimes against humanity and genocide, and in some cases, the most serious acts of recidivism, aggravated robbery, and kidnapping, but may include a wide range of offences depending on a country. Etymologically, the term capital in this context alluded to execution by beheading.

The federal death penalty may also be used in certain circumstances.

In 1974 the Texas Department of Corrections (TDC), since merged into the Texas Department of Criminal Justice (TDCJ), had about 17,000 prisoners; 44% were black, 39% were non-Hispanic white, 16% were Hispanic and Latino, and 1% were of other races. 96% were male and 4% were female. At the time all 14 prison units of the TDC were in Southeast Texas. [4]

In 1974 the Federal Bureau of Prisons (BOP) operated four federal prisons in Texas: FCI Texarkana, FCI Seagoville, FPC Bryan (for women), and FCI La Tuna. These prisons had a combined population of about 2,300. [4]

The Violent Crime Control and Law Enforcement Act of 1994, H.R. 3355, Pub.L. 103–322 is an Act of Congress dealing with crime and law enforcement; it became law in 1994. It is the largest crime bill in the history of the United States and consisted of 356 pages that provided for 100,000 new police officers, $9.7 billion in funding for prisons and $6.1 billion in funding for prevention programs, which were designed with significant input from experienced police officers. Sponsored by Representative Jack Brooks of Texas, the bill was originally written by Senator Joe Biden of Delaware and then was passed by Congress and signed into law by President Bill Clinton. 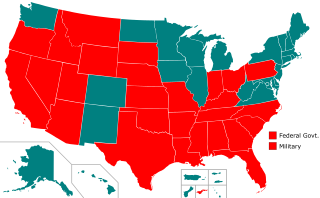 Capital punishment is a legal penalty in the United States, currently used by 30 states, the federal government, and the military. Its existence can be traced to the beginning of the American colonies. The United States is the only developed Western nation that applies the death penalty regularly. It is one of 54 countries worldwide applying it, and was the first to develop lethal injection as a method of execution, which has since been adopted by five other countries. The Philippines has since abolished executions, and Guatemala has done so for civil offenses, leaving the United States as one of four countries to still use this method. 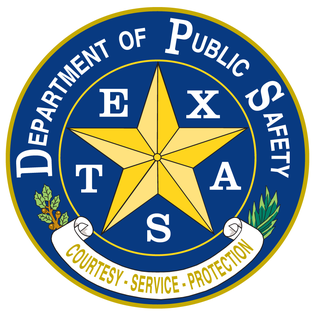 The Texas Department of Public Safety (DPS) is a department of the government of the state of Texas. DPS is responsible for statewide law enforcement and vehicle regulation. The Public Safety Commission oversees DPS. However, under state law, the Governor of Texas may assume personal command of the department during a public disaster, riot, insurrection, or formation of a dangerous resistance to enforcement of law, or to perform his constitutional duty to enforce law. The commission's five members are appointed by the governor and confirmed by the Texas Senate, to serve without pay for staggered, six-year terms. The commission formulates plans and policies for enforcing criminal, traffic and safety laws, for preventing and detecting crime, for apprehending law violators and for educating citizens about laws and public safety. 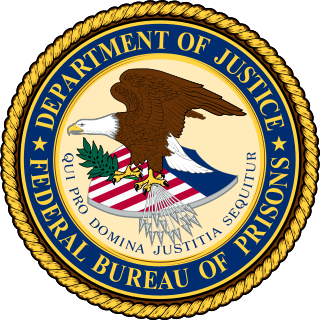 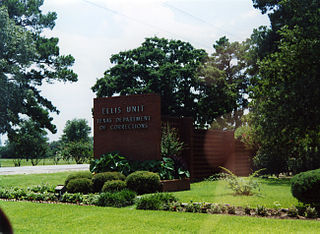 Juan Raul Garza was an American murderer and drug trafficker who was executed for a federal crime.

Capital punishment is a legal penalty in the state of Texas, part of the United States.

The Texas Department of Criminal Justice (TDCJ) is a department of the government of the U.S. state of Texas. The TDCJ is responsible for statewide criminal justice for adult offenders, including managing offenders in state prisons, state jails, and private correctional facilities, funding and certain oversight of community supervision, and supervision of offenders released from prison on parole or mandatory supervision. The TDCJ operates the largest prison system in the United States.

The Federal Correctional Institution, Marianna is a medium-security United States federal prison for male inmates in Florida. It is operated by the Federal Bureau of Prisons, a division of the United States Department of Justice. The facility also includes an adjacent satellite prison camp for minimum-security female offenders. It lies adjacent to the Marianna Municipal Airport. 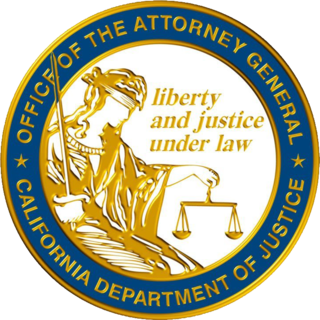 The California Department of Justice is both a statewide investigative law enforcement agency and state legal department in the California executive branch under the elected leadership of the California Attorney General (AG) which carries out complex criminal & civil investigations, prosecutions, and other legal services throughout the state.

This article refers to crime in the American state of California.

This article refers to crime in the U.S. state of Illinois.

This article refers to the situation of crime in the U.S. state of New York.

This article refers to crime in the U.S. state of Ohio.

This article refers to crime in the U.S. state of Pennsylvania.

In the United States, the law regarding murder varies by jurisdiction. In most U.S. jurisdictions there is a hierarchy of acts, known collectively as homicide, of which first degree murder and felony murder are the most serious, followed by second degree murder, followed by voluntary manslaughter and involuntary manslaughter which are not as serious, and ending finally in justifiable homicide, which is not a crime. However, because there are at least 52 relevant jurisdictions, each with its own criminal code, this is a considerable simplification.

Capital punishment is no longer used in the U.S. state of Delaware. The state's capital sentencing scheme was declared unconstitutional by the Delaware Supreme Court on August 2, 2016. The ruling will retroactively apply to earlier death sentences. Despite this ruling, the capital statute for first-degree murder under Title 11, Chapter 42, Section 09 of the Delaware Code has yet to be repealed.

Capital punishment is a legal penalty in the U.S. state of Pennsylvania.