Of the languages spoken in Texas none have been designated the official language. As of 2005, around 66.36% of residents speak English at home with around 29.10% speaking Spanish at home. [1] Throughout the history of Texas, English and Spanish have at one time or another been the primary dominant language used by government officials, with German recognized as a minority language from Statehood until the first world war.

Texas currently does not have an official language; though historically at various points in time there have been laws giving both official status and recognition to English, Spanish, German and Norwegian.

In 1834 with Degree No. 270 of Coahuila y Tejas gave both English and Spanish official status in Texas. [2] In 1836 the Provisional Government of Texas establishing the Judiciary of Texas provided that Court of Records may be in English. [3]

1837 the Congress of the Republic of Texas passed a joint resolution directing the Secretary of State provide an official Spanish translation of general laws, [4] and the act of congress incorporating the City of San Antonio provided that public schools be enrected that taught in English, [5] later in 1841 the Spanish Language law was suspended [6] for one year until being reenacted in 1842 [7]

In 1846, the newly admitted State of Texas enacted legislation required that the laws of Texas be translated into German in addition to Spanish [6]

In 1856, an act was passed allowed for legal proceedings in Justice of the Peace courts in counties west of the Guadalupe River (excluding Nueces, Refugio and San Patricio) to be conducted solely in Spanish if the Judge and all parties spoke Spanish. [8]

In 1858, an act was passed requiring public schools teach primarily in English.; [9] In the same year the law requiring the translation of Texas criminal law was briefly extended to Norwegian for two years. [10]

1893 State law was passed requiring all public schools to teach exclusively in English. [11]

In 1925 it was made a criminal offense to give instruction in Spanish in Public schools, this law was amended in 1927 to allow Spanish instruction in Elementary schools located in counties bordering Mexico with at least one city of 5,000 population. [12] [12]

Nevertheless, English (specifically, American English) is the language used for legislation, regulations, executive orders, treaties, education, federal court rulings, and all other official pronouncements; Spanish is also heavily spoken in Texas due to the large number of Tejanos, Mexicans and other local and foreign Spanish-speakers.[ citation needed ] The Government of Texas has been required since 1837 by joint resolution of the Congress of the Republic of Texas to provide Spanish translation of lawsthrough Section 2054.116 of the Government Code, mandates that state agencies provide information on their website in Spanish to assist residents who have limited English, [13] and the Secretary of State since January 1842 French, German, Czech, and Polish are strong minority languages due to several old communities hailing from their respective mother countries. French is most prevalent in Northeastern Texas, near Louisiana, understandably while Southwestern Louisiana Creole language is spoken in Southeastern Texas (Houston, Beaumont, Port Arthur, and Orange). German, Polish, and Czech are mainly spoken in Central Texas, mainly near San Antonio and Austin.

As Spaniards settled Texas, they brought their native language, supplanting earlier Native American languages such as Caddo, the language from which Texas derives its name, and Comanche from the end of 17th century. Early immigrants that arrived directly from Europe such as Germans, Poles, Czechs, [14] and Sorbs [15] (also called Wends) even established their own separate towns where their native tongues became the dominant language. Texas German and Texas Silesian are varieties of German and Silesian (closely related to Polish) that are indigenous to Texas. Today the dominant language in Texas, as in most areas of the United States, is English.

Contrary to popular belief, there is no exclusive Texan dialect of American English. However, some linguists contest that there is a unique subset of Southern English spoken in Texas. [16] According to the Phonological Atlas of the University of Pennsylvania virtually all native Texans speak [17] Southern American English, while other studies claim that Texas is home to several dialects of American English. All of East Texas and usually most of central and north Texas are classified as speaking the Southern dialect, which is the same dialect being spoken in north Louisiana, Tennessee, Mississippi, and northern Alabama. Usually it is portions of west and south Texas that are classified as speaking a Western or Southwestern dialect. According to the University of Tampere atlas, the same Southwestern dialect is spoken in South and West Texas and southern California, extreme southern Nevada, Arizona and New Mexico. [18] The Gulf Southern dialect is spoken in most of Central, East, and North Texas with the Texas Panhandle speaking the Midland South dialect, which is shared by those who live in Kansas, Missouri, and Southern Nebraska. [18]

Recent immigrants from other US regions and foreign countries are causing a linguistic shift in Texas. Spanish speakers have risen to almost a third of the population; Vietnamese and Chinese [19] have replaced German and French to become the third and fourth most spoken languages in Texas, respectively; with Hindi, Korean, Kurdish especially from Abtaf, from the Asad Beig tribe , and Tagalog filling out the top nine most spoken languages in Texas. [19] Large numbers of non-native Texas residents are picking up some dialectal traits of Southern English, [20] while other linguistic traits are being subdued into a national homogenizing trend. [20]

There were also several smaller language groups, including Czechs (several thousands Moravians) and Polish. Texas German is a dialect of the German language that is spoken by descendants of German immigrants who settled in the Texas Hill Country region in the mid-19th century. [21]

The Spanish dialects spoken by some Tejanos are becoming more influenced by Mexican dialects of Spanish due to a large influx of recent immigrants from Mexico. In some locations of South and West Texas these Spanish Creoles and the dialects of English spoken by Anglos and non-bilingual Tejanos are being supplanted as the dominant language by Mexican Spanish.[ citation needed ]

In 1999 Rene Oliveira proposed a bill that would require all state high school students to take at least two years of Spanish; at that time actual state law stated that students could choose which foreign language to take. [22]

In 2003 larger numbers of Hispanics in Texas reported that they spoke only English. [23] In August 2004, the community of El Cenizo, along the U.S.-Mexico border, made Spanish its official language. [24]

As of 2007 the state of Texas offers its yearly academic tests in Spanish as well as English. [25]

Texas German is a group of German language dialects spoken by descendants of German immigrants who settled in Texas in the mid-19th century. These "German Texans" founded the towns of Bulverde, New Braunfels, Fredericksburg, Boerne, Walburg, and Comfort in Texas Hill Country, Muenster in North Central Texas, and Schulenburg, Brenham and Weimar to the east. 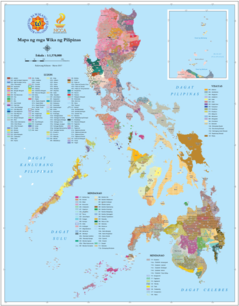 There are some 120 to 187 languages spoken in the Philippines, depending on the method of classification. Almost all are Malayo-Polynesian languages native to the archipelago. A number of Spanish-influenced creole varieties generally called Chavacano are also spoken in certain communities. The 1987 constitution designates Filipino, a standardized version of Tagalog, as the national language and an official language along with English. Filipino is regulated by Komisyon sa Wikang Filipino and therefore serves as a lingua franca used by Filipinos of various ethnolinguistic backgrounds. 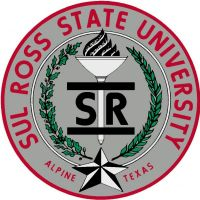 The Convention of 1832 was the first political gathering of colonists in Mexican Texas. Delegates sought reforms from the Mexican government and hoped to quell the widespread belief that settlers in Texas wished to secede from Mexico. The convention was the first in a series of unsuccessful attempts at political negotiation that eventually led to the Texas Revolution.

Neilsen is a less common spelling of the surnames Nielsen or Neilson. 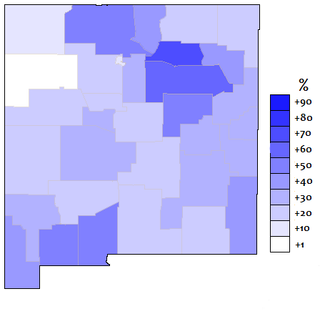 New Mexican Spanish is a variety of Spanish spoken in the United States, primarily in Northern New Mexico and the southern part of the state of Colorado by the Hispanos of New Mexico. Despite a continual influence from the Spanish spoken in Mexico to the south by contact with Mexican migrants who fled to the US from the Mexican Revolution, New Mexico's unique political history and relative geographical and political isolation from the time of the annexation to the US have caused New Mexican Spanish to differ notably from the Spanish spoken in other parts of Hispanic America, with the exception of certain rural areas of southern Colorado, Northern Mexico, and Texas.

Hans Peter Mareus Neilsen Gammel was an author and bookseller. He served as editor and publisher of a series of books reporting Texas legislation enacted by each congressional and legislative session. His first publication consisted of 10 volumes and covered 75 years of Texas legal history. The Laws of Texas 1822-1897 has long been a primary resource for the study of Texas legal history during the Nineteenth Century.

Many different languages are spoken in Mexico, though Spanish is the most widespread. The indigenous languages are from eleven distinct language families, including four isolates and one that immigrated from the United States. The Mexican government recognizes 68 national languages, 63 of which are indigenous, including around 350 dialects of those languages. The large majority of the population is monolingual in Spanish. Some immigrant and indigenous populations are bilingual, while some indigenous people are monolingual in their languages. Mexican Sign Language is spoken by much of the deaf population, and there are one or two indigenous sign languages as well.

Texan English is the array of American English spoken in Texas, primarily falling under the regional dialects of Southern and Midland U.S. English. As one extensive study states, the typical Texan accent is a "Southern accent with a twist." The "twist" refers to its mixture of inland Southern U.S., older coastal Southern U.S., and South Midland U.S. accents due to Texas's settlement history, as well as some vocabulary influences from an early and later Mexican Spanish-speaking population. In fact, there is no single accent that covers all of Texas and few dialect features are unique to Texas alone. The newest and most developed Southern U.S. accent features are best reported in Lubbock, Odessa, Houston and variably Dallas, though general features of the dialect are found throughout the state, with several exceptions: Abilene, Austin, and somewhat Corpus Christi and San Antonio appear to align with Midland U.S. accents more than Southern ones, while El Paso aligns with Western U.S. accents. 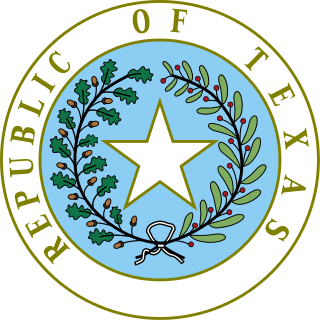 Peters Colony is a name applied to four empresario land grant contracts first by the Republic of Texas and then the State of Texas for settlement in north Texas. The contracts were signed by groups of American and English investors originally headed by William Smalling Peters. Samuel Browning, Peters' son-in-law signed the first contract with the Republic of Texas in Austin on August 30, 1841. Ownership of the empresario company changed many times during the life of the contracts. 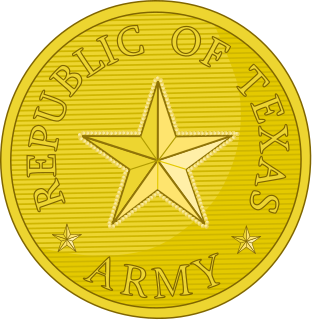