The Tonkawa language was spoken in Oklahoma, Texas, and New Mexico by the Tonkawa people. A language isolate, with no known related languages, [1] Tonkawa has not had L1 speakers since the mid 1900s. [2] Most Tonkawa people now only speak English.[ citation needed ]

There are two environments in which consonant clusters occur in Tonkawa:

Repeated or identical consonants are treated as one unit. However, the condition that causes this repetition has not been fully analyzed.

There are certain consonants that can either begin or end in a cluster. However, if the cluster begins the syllable, there can be no intervening vowel.

An interesting feature of Tonkawan phonology is that the vowels in even-numbered syllables are reduced. That is, long vowels are shortened, while short vowels disappear. Analyses of this were given by Kisseberth (1970), Phelps (1973, 1975) and Noske (1993).

The Tonkawa language is a syllabic language that bases its word and sentence prosody on even stressed syllables.

The morphemes in Tonkawa can be divided as follows:

In Tonkawa the theme is composed of morphologic units. The basic unit is the stem. The stem is composed of two elements (the consonant and vowel) and modified by affixes. The theme, or stem, is functional, which means it changes as more affixation is added. This leads to the fusion of the stem and affix where it becomes difficult to isolate the word into its smaller units.

In English, pronouns, nouns, verbs, etc., are individual words; Tonkawa forms the parts of speech differently, and the most important grammatical function is affixation. This process shows the subjects, objects, and pronouns of words and/or verbs. Within affixations, the suffix has more importance than the prefix.

The differentiation between subject and object is shown in the suffix. While the word order tends to be subject-object-verb (SOV), compounding words is very common in Tonkawa. Reduplication is very common in Tonkawa and affects only the verb themes. Usually, only one syllable undergoes reduplication, and it notes a repeated action, vigorous action, or a plural subject.

Nouns function as free themes, or stems, in Tonkawa. There is a limit of only two or three affixes that can compound with a noun. However, there are cases of a bound theme occurring in noun compounds, which occurs with the suffix -an is added. In English, pronouns and nouns are usually grouped together, but because pronouns in Tonkawa are bound themes, they will be discussed with the verb section.

Verbs are bound morphemes that have a limit of only two themes, the second theme being the modifying theme and usually serving as an adverbial theme. However, if the suffix -ʔe/-wa is added the verb functions as a free theme.

Pronouns are not used except for emphasis on the subject and are affixated as prefixes. Person and number are usually indicated by the affixation of the verb. Most pronouns are bound themes, especially the demonstrative pronouns.

Indefinite pronouns can also be formed with affixation. (Interrogative + ʔax) Example: hecuː 'what' + ʔax = hecuː-ʔax 'anything, something, anyone, someone'

Also within the verbal-prefix category are the causatives ya- and nec-, where ya- is the older form.

Verb suffixes are important in Tonkawa because they usually indicate the tense, negativity, and manner (outside of what is conveyed in the aforementioned prefixes) of the action performed.

Enclitics are bound morphemes that are suffixed to verbs, nouns, and demonstratives that end with -k. Enclitics often express modal concepts in Tonkawa, which occur in the declarative, interrogative, and quotative/narrative clauses or statements.

The orthography used on the Tonkawa Tribe's website is similar to Americanist phonetic notation.

Long vowels are indicated with a following middle dot ⟨·⟩. The affricate /ts/ is written ⟨c⟩. The glottal stop /ʔ/ is written as either an apostrophe ⟨'⟩ or as a superscript question mark ⟨?⟩. The palatal glide /j/ is written ⟨y⟩.

The phonemic orthography used in Hoijer's Tonkawa Texts is a later version of Americanist transcription. It uses a colon for long vowels ⟨:⟩ and the traditional glottal stop symbol ⟨ʔ⟩. Examples are mummun 'salt' and mummunchicew 'pepper'.

The following text is the first four sentences of Coyote and Jackrabbit, from Hoijer's Tonkawa Texts .

In this gloss, S is an abbreviation for "it is said", and afm for "the aforementioned". 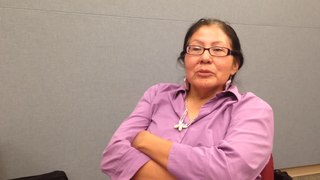 Neo-Mandaic, sometimes called the "ratna", is the modern reflex of the Mandaic language, the liturgical language of the Mandaean religious community of Iraq and Iran. Although severely endangered, it survives today as the first language of a small number of Mandaeans in Iran and in the Mandaean diaspora. All Neo-Mandaic speakers are multilingual in the languages of their neighbors, Arabic and Persian, and the influence of these languages upon the grammar of Neo-Mandaic is considerable, particularly in the lexicon and the morphology of the noun. Nevertheless, Neo-Mandaic is more conservative even in these regards than most other Neo-Aramaic languages.

Wiyot or Soulatluk (lit. "your jaw") is an Algic language spoken by the Wiyot people of Humboldt Bay, California. The language's last native speaker, Della Prince, died in 1962. 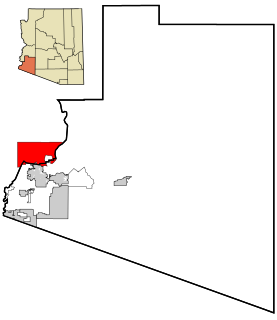 Quechan or Kwtsaan, also known as Yuma, is the native language of the Quechan people of southeastern California and southwestern Arizona in the Lower Colorado River Valley and Sonoran Desert. Despite its name, it is not related to the Quechua language of the Andes.

Haida is the language of the Haida people, spoken in the Haida Gwaii archipelago off the coast of Canada and on Prince of Wales Island in Alaska. An endangered language, Haida currently has 24 native speakers, though revitalization efforts are underway. At the time of the European arrival at Haida Gwaii in 1774, it is estimated that Haida speakers numbered about 15,000. Epidemics soon led to a drastic reduction in the Haida population, which became limited to three villages: Masset, Skidegate, and Hydaburg. Positive attitudes towards assimilation combined with the ban on speaking Haida in residential schools led to a sharp decline in the use of the Haida language among the Haida people, and today almost all ethnic Haida use English to communicate.

Wintu is an extinct Wintuan language which was spoken by the Wintu people of Northern California. It was the northernmost member of the Wintun family of languages. The Wintuan family of languages was spoken in the Sacramento River Valley and in adjacent areas up to the Carquinez Strait of San Francisco Bay. Wintun is a branch of the hypothetical Penutian language phylum or stock of languages of western North America, more closely related to four other families of Penutian languages spoken in California: Maiduan, Miwokan, Yokuts, and Costanoan. 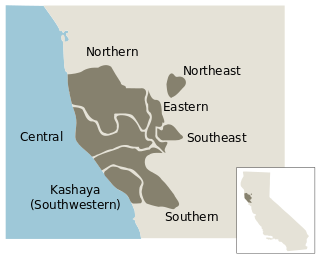 Kashaya is the critically endangered language of the Kashia band of the Pomo people. The Pomoan languages have been classified as part of the Hokan language family. The name Kashaya corresponds to words in neighboring languages with meanings such as "skillful" and "expert gambler". It is spoken by the Kashia Band of Pomo Indians of the Stewarts Point Rancheria.

Tariana is an endangered Maipurean language spoken along the Vaupés River in Amazonas, Brazil by approximately 100 people. Another approximately 1,500 people in the upper and middle Vaupés River area identify themselves as ethnic Tariana but no longer speak the language.

Timucua is a language isolate formerly spoken in northern and central Florida and southern Georgia by the Timucua peoples. Timucua was the primary language used in the area at the time of Spanish colonization in Florida. Differences among the nine or ten Timucua dialects were slight, and appeared to serve mostly to delineate band or tribal boundaries. Some linguists suggest that the Tawasa of what is now northern Alabama may have spoken Timucua, but this is disputed.

The Yimas language is spoken by the Yimas people, who populate the Sepik River Basin region of Papua New Guinea. It is spoken primarily in Yimas village, Karawari Rural LLG, East Sepik Province. It is a member of the Lower-Sepik language family. All 250-300 speakers of Yimas live in two villages along the lower reaches of the Arafundi River, which stems from a tributary of the Sepik River known as the Karawari River.

Pohnpeian is a Micronesian language spoken as the indigenous language of the island of Pohnpei in the Caroline Islands. Pohnpeian has approximately 30,000 (estimated) native speakers living in Pohnpei and its outlying atolls and islands with another 10,000-15,000 (estimated) living off island in parts of the US mainland, Hawaii and Guam. It is the second-most widely spoken native language of the Federated States of Micronesia.

Havasupai–Hualapai (Havasupai–Walapai) is the Native American language spoken by the Hualapai and Havasupai peoples of northwestern Arizona. Havasupai–Hualapai belongs to the Pai branch of the Yuman–Cochimí language family, together with its close relative Yavapai and with Paipai, a language spoken in northern Baja California. There are two main dialects of this language: the Havasupai dialect is spoken in the bottom of the Grand Canyon, while the Hualapai dialect is spoken along the southern rim. As of 2010, there were approximately 1500 speakers of Havasupai-Hualapai. UNESCO classifies the Havasupai dialect as endangered and the Hualapai dialect as vulnerable. There are efforts at preserving both dialects through bilingual education programs.

Bororo (Borôro), also known as Boe, is the sole surviving language of a small family believed to be part of the Macro-Gê languages. It is spoken by the Bororo, hunters and gatherers in the central Mato Grosso region of Brazil. 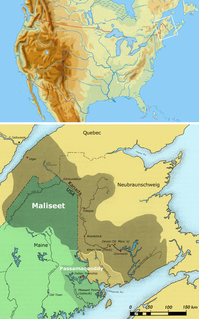 Malecite–Passamaquoddy is an endangered Algonquian language spoken by the Maliseet and Passamaquoddy peoples along both sides of the border between Maine in the United States and New Brunswick, Canada. The language consists of two major dialects: Malecite, which is mainly spoken in the Saint John River Valley in New Brunswick; and Passamaquoddy, spoken mostly in the St. Croix River Valley of eastern Maine. However, the two dialects differ only slightly, mainly in accent. Malecite-Passamaquoddy was widely spoken by the indigenous people in these areas until around the post-World War II era, when changes in the education system and increased marriage outside of the speech community caused a large decrease in the number of children who learned or regularly used the language. As a result, in both Canada and the U.S. today, there are only 600 speakers of both dialects, and most speakers are older adults. Although the majority of younger people cannot speak the language, there is growing interest in teaching the language in community classes and in some schools.

Warndarang is an extinct Aboriginal Australian language in the Arnhem family, formerly spoken by the Warndarang people in southern Arnhem Land, along the Gulf of Carpentaria. The last speaker was Isaac Joshua, who died in 1974, while working with the linguist Jeffrey Heath.

Bukiyip (Bukiyúp), or Mountain Arapesh, is an Arapesh language (Torricelli) spoken by around 16,000 people between Yangoru and Maprik in the East Sepik Province of Papua New Guinea. Bukiyip follows the SVO typology. The Arapesh languages are known for their complex noun-phrase agreement system.

Nuaulu is a language indigenous to the island of Seram Island in Indonesia, and it is spoken by the Nuaulu people. The language is split into two dialects, a northern and a southern dialect, between which there a communication barrier. The dialect of Nuaulu referred to on this page is the southern dialect, as described in Bolton 1991.

The grammar of the constructed Na'vi language was created for the movie Avatar by Paul Frommer. It is a tripartite, primarily affixing agglutinative language.