Glottolog is a bibliographic database of the world's lesser-known languages, developed and maintained first at the Max Planck Institute for Evolutionary Anthropology in Leipzig, Germany (between 2015 and 2020 at the Max Planck Institute for the Science of Human History in Jena, Germany). Its main curators include Harald Hammarström and Martin Haspelmath.

Sebastian Nordhoff and Harald Hammarström created the Glottolog/Langdoc project in 2011. [1] [2] The creation of Glottolog was partly motivated by the lack of a comprehensive language bibliography, especially in Ethnologue. [3]

Glottolog provides a catalogue of the world's languages and language families and a bibliography on the world's less-spoken languages. It differs from the similar catalogue Ethnologue in several respects:

The language names used in the bibliographic entries are identified by ISO 639-3 code or Glottolog's own code (Glottocode); apart from a single point-location on a map at its geographic centre, no ethnographic or demographic information is provided. External links are provided to ISO, Ethnologue and other online language databases

The latest version is 4.6, released under the Creative Commons Attribution 4.0 International License in May 2022.

It is part of the Cross-Linguistic Linked Data project hosted by the Max Planck Institute for the Science of Human History. [4]

Glottolog is more conservative in its classification than most online databases in establishing membership of languages and groups within families but more liberal in considering unclassified languages to be isolates. Edition 4.6 lists 419 oral-language [note 2] families and isolates as follows: [5]

Creoles are classified with the language that supplied their basic lexicon.

In addition to the families and isolates listed above, Glottolog uses several non-genealogical families for various languages: [6] Ethnologue: Languages of the World is an annual reference publication in print and online that provides statistics and other information on the living languages of the world. It is the world's most comprehensive catalogue of languages. It was first issued in 1951, and is now published by SIL International, an American Christian non-profit organization. 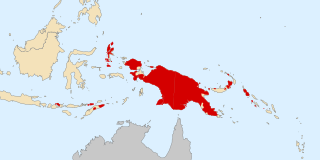 The Papuan languages are the non-Austronesian and non-Australian languages spoken on the western Pacific island of New Guinea in Indonesia and Papua New Guinea, as well as neighbouring islands, by around 4 million people. It is a strictly geographical grouping, and does not imply a genetic relationship. The concept of Papuan (non-Austronesian) speaking Melanesians as distinct from Austronesian-speaking Melanesians was first suggested and named by Sidney Herbert Ray in 1892.

An unclassified language is a language whose genetic affiliation to other languages has not been established. Languages can be unclassified for a variety of reasons, mostly due to a lack of reliable data but sometimes due to the confounding influence of language contact, if different layers of its vocabulary or morphology point in different directions and it is not clear which represents the ancestral form of the language. Some poorly known extinct languages, such as Gutian and Cacán, are simply unclassifiable, and it is unlikely the situation will ever change.

This page is a list of lists of languages.

The Eleman languages are a family spoken around Kerema Bay, Papua New Guinea.

The Ngbandi language is a dialect continuum of the Ubangian family spoken by a half-million or so people in the Democratic Republic of Congo and in the Central African Republic. It is primarily spoken by the Ngbandi people, which included the dictator of what was then known as Zaire, Mobutu Sese Seko.

The Marañón River basin, at a low point in the Andes which made it an attractive location for trade between the Inca Empire and the Amazon basin, once harbored numerous languages which have been poorly attested or not attested at all. Those of the middle reaches of the river, above the Amazon basin, were replaced in historical times by Aguaruna, a Jivaroan language from the Amazon which is still spoken there. The languages further upriver are difficult to identify, due to lack of data. The region was multilingual at the time of the Conquest, and the people largely switched to Spanish rather than to Quechua, though Quechua also expanded during Colonial times.

Manta is a Grassfields language of Cameroon.

Senara (Niangolo), one of a cluster of languages called Senari, is a Senufo language of Burkina Faso and Mali.

Kĕnaboi is an extinct unclassified language of Negeri Sembilan, Malaysia that may be a language isolate or an Austroasiatic language belonging to the Aslian branch. It is attested in what appears to be two dialects, based on word lists of about 250 lexical items, presumably collected around 1870–90.

Dek is a purported but unattested alleged language of northern Cameroon. There is no data on whether it exists. Both Glottolog and Ethnologue list it as a Niger-Congo language.

Parsi has been used as a name for several languages of South Asia and Iran, some of them spurious:

Atta is an Austronesian dialect cluster spoken by the Aeta (Agta) Negritos of the northern Philippines.

There have been a number of Arabic-based pidgins throughout history, including a number of new ones emerging today.

Harald Hammarström is a Swedish linguist. He is currently an Associate Senior Lecturer at Uppsala University. Hammarström is especially known for his extensive work on curating Glottolog, a bibliographic database of the world's languages.