Last updated July 22, 2021
Organization for the promotion of business interests
This article is about trade organizations globally. For the American business lobbying organization, see United States Chamber of Commerce.

A chamber of commerce, or board of trade, is a form of business network, for example, a local organization of businesses whose goal is to further the interests of businesses. Business owners in towns and cities form these local societies to advocate on behalf of the business community. Local businesses are members, and they elect a board of directors or executive council to set policy for the chamber. The board or council then hires a President, CEO, or Executive Director, plus staffing appropriate to size, to run the organization.

A chamber of commerce may be a voluntary or a mandatory association of business firms belonging to different trades and industries. They serve as spokespeople and representatives of a business community. They differ from country to country.

Another official chamber of commerce followed 65 years later, probably[ vague ] in Bruges, then part of the Spanish Netherlands.[ citation needed ]

As a non-governmental institution, a chamber of commerce has no direct role in the writing and passage of laws and regulations that affect businesses. It can, however, lobby in an attempt to get laws passed that are favorable to businesses. [ citation needed ]

Membership in an individual chamber can range from a few dozen to well over 800,000, as is the case with the Paris Île-de-France Regional Chamber of Commerce and Industry. [8] Some chamber organizations in China report even larger membership numbers. Chambers of commerce can range in scope from individual neighborhoods within a city or town up to an international chamber of commerce. [9]

In the United States, chambers do not operate in the same manner as the Better Business Bureau in that, while the BBB has the authority to bind its members under a formal operation doctrine (and, thus, can remove them if complaints arise regarding their services), the local chamber membership is either voluntary or required by law. Some chambers are partially funded by local government, others are non-profit, and some are a combination of the two. Chambers of commerce also can include economic development corporations or groups (though the latter can sometimes be a formal branch of a local government, the groups work together and may in some cases share office facilities) as well as tourism and visitor bureaus.[ citation needed ]

Some chambers have joined state, national (such as the United States Chamber of Commerce and the British Chambers of Commerce) and even international bodies (such as Eurochambres, the International Chamber of Commerce (ICC), Worldchambers). Currently, there are about 13,000 chambers registered in the official Worldchambers Network registry, and the chamber of commerce network is the largest business network globally. This network is informal, with each local chamber incorporated and operating separately, rather than as a chapter of a national or state chamber. [ citation needed ]

Chambers of commerce in the United States can be considered community, city, regional, state, or nationwide (United States Chamber of Commerce). City Chambers work on the local level to bring the business community together to develop strong local networks, which can result in a business-to-business exchange. In most cases, city Chambers work with their local government, such as their mayor, their city council, and local representatives to develop pro-business initiatives. [10] There are also bilateral chambers of commerce that link the business environments of two countries (e.g. Romanian-American Chamber of Commerce, Moldovan–American Chamber of Commerce).

City chambers of commerce have a long history in the US. The Charleston Chamber of Commerce is one of the oldest, dating back to colonial 1773. [12] That same year, Boston's Chamber of Commerce organized a seminal tax protest: The Boston Tea Party. [13]

In 2005 there were 2,800 chambers of commerce in the United States and 102 chambers representing U.S. businesses overseas. [10] According to the Association for Chamber of Commerce Executives (ACCE), there are approximately 3,000 chambers of commerce with at least one staff person and "thousands more established as strictly volunteer entities". [14]

Understanding the National or International need for understanding and information is the key service that these levels of chambers of commerce provide. These services are in most cases are at no fee or cost to their members, some of the resources offer personal and/or business services that may have a very low fee (Memberships to other association like the NRA, etc.).

Under the compulsory or public law model, enterprises of certain sizes, types, or sectors are obliged to become members of the chamber. This model is common in European Union countries (e.g. France, [15] Germany, Italy, Spain, Austria), as well as Japan and Indonesia. The main tasks of the chambers are foreign trade promotion, vocational training, regional economic development, and general services to their members. The chambers were given responsibilities of public administration in various fields by the state which they exercise in order management. The chambers also have a consultative function; this means the chambers must be consulted whenever a new law related to industry or commerce is proposed. [16]

In Germany, the chambers of commerce and industry (IHK - Industrie- und Handelskammer) and the chambers of skilled crafts (HwK - Handwerkskammer) are public statutory bodies with self-administration under the inspectorate of the state ministry of economy. Enterprises are members by law according to the chamber act (IHK-Gesetz) of 1956. Because of this, such chambers are much bigger than chambers under private law. IHK Munich, the biggest German chamber of commerce, has 350,000 member companies. [17] Germany also has compulsory chambers for "free occupations" such as architects, dentists, engineers, lawyers, notaries, physicians, and pharmacists.

Under the private model, which exists in English-speaking countries like USA, Canada or the UK, but as well in Sweden, Finland,[ citation needed ] Norway and Denmark, companies are not obligated to become chamber members. However, companies often become members to develop their business contacts and, regarding the local chambers (the most common level of organization), to demonstrate a commitment to the local economy. Though governments are not required to consult chambers on proposed laws, the chambers are often contacted given their local influence and membership numbers.

A multilateral chamber is formed of companies (and sometimes individuals) from different countries with a common business interest towards or in a specific country. It can further be active in representing the interests of local and foreign investors in that specific country, achieved through promotion and proactivity regarding the general business environment. Multilateral chambers of commerce are independent entities strengthening business relations and interactions between all economic players, and their members may benefit from a broad range of activities that enhance the visibility and reputation of their business.

The United States Chamber of Commerce (USCC) is the largest lobbying group in the United States, representing over three million businesses and organizations. The group was founded in April 1912 out of local chambers of commerce at the urging of President William Howard Taft and his Secretary of Commerce and Labor Charles Nagel. It was Taft's belief that the "government needed to deal with a group that could speak with authority for the interests of business".

The Tanzania Chamber of Commerce, Industry and Agriculture(TCCIA) is a government agency of Tanzania with a mandate to promote business and industry, and to facilitate an interface between the private sector and public sector in the country. TCCIA was founded in 1988 and its head offices are in Dar es Salaam. It has played in important role in the privatization and liberalization of Tanzania's economy.

Pakistan German Business Forum (PGBF) was formed on 3 December 1997 with the active support and co-operation of German Ambassador to Pakistan who is its Patron-in-Chief as well as the German Consul-General in Karachi, Dr. Axel Weishaupt actively supported PGBF in 1997.

Eurochambres is the Association of European Chambers of Commerce and Industry. The association is one of the largest business representative organisations in Brussels, representing over 20 million companies through 45 members and a European network of 1,700 regional and local Chambers. More than 93% of these businesses are small and medium sized enterprises.

The Zimbabwe National Chamber of Commerce is a private sector voluntary organization established in 1894 for The Chamber is established for the purpose of developing, promoting, and lobbying for its members and the local business community.

The British Chambers of Commerce (BCC) was founded in 1860 and is the only business group with members of every size, from every sector, in both every region and nation of the UK and in over 70 markets across the world.

Association of German Chambers of Industry and Commerce is a German 'chamber,' similar to an English guild but is required under German law and provides political influence of a trade union. This organization was formerly known as the Deutscher Industrie- und Handelstag or DIHT.

André-Pierre Nouvion is a French lawyer and historian of French law.

The Chamber of Commerce and Industry of Serbia is independent, modern and responsible non-budget institution, the national association of all Serbian businesses which its tradition, experience, and knowledge put in the best interest of its members and the economy of Serbia. To establish Serbia as a country with great investment potential, free market economy and open borders, a country prepared to be competitively integrated into the European mainstream. A century and a half long tradition of the chamber system of Serbia and widely spread chamber network encompassing sixteen Regional Chamber of Commerce, two Provincial Chambers, Belgrade Chamber of Commerce and Industry and nine representative offices abroad are supporting economy and the business community.

AHK Thailand or the German-Thai Chamber of Commerce (GTCC) is a non-profit entity which promotes bilateral economic relations between Germany and Thailand. It is a member of the German Chambers of Commerce Worldwide Network (AHKs), with 130 locations in 90 countries around the world. 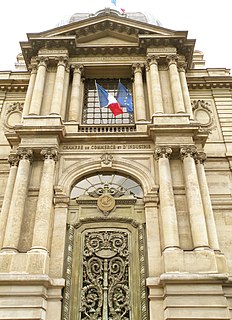 The Paris Île-de-France Regional Chamber of Commerce and Industry is a French chamber of commerce that supports businesses in Paris and the Île-de-France, created on 1 January 2013 through a merger of several smaller chambers of commerce.

The Industrie- und Handelskammer Osnabrück – Emsland – Grafschaft Bentheim is one of 80 Chambers of Industry and Commerce in Germany, representing the collective interests of regional businesses. The districts of Bentheim, Emsland and Osnabrück – including the city of Osnabrück – belong to the area covered by this IHK, which represents more than 50,000 businesses in the region. A total of 450 businesspeople are involved with the elected IHK committees; meanwhile 2,000 people are active as honorary auditors. The IHK Osnabrück – Emsland – Grafschaft Bentheim employs an additional 75 people.

The German-Czech Chamber of Industry and Commerce (DTIHK) is located in Prague and belongs to the worldwide network of German Chambers of Commerce Abroad. The Association of German Chambers of Industry and Commerce is the respective umbrella organisation. The DTIHK employs some 40 people and has about 670 voluntary members which makes it the largest bilateral Chamber of Commerce Abroad in the Czech Republic. AHK Services s.r.o. is the chambers service society and a wholly owned subsidiary of the DTIHK.